Jonkershove, where the lecture will take place can be described as dark space coordinates which sublimate a brutal materiality. The most prominent characteristics of this modest but great edifice are the robust materialization and sensual details.

(autotranslated) The villagehouse Jonkershove, where the lecture will take place is described as dark space coordinates which sublimate a brutal materiality. The most prominent characteristics of this modest but great edifice of Rapp + Rapp, his robust materialization and sensual detail. The chosen extruded rock that dominates the design has its own tactile quality, honest and direct, concocted from the inherent properties of the materials, the manufacturing process and above all to the last detail thought out process. It is clear that Rapp + Rapp is looking at the hard core of beauty, not so much for style or elegance, but to mentality.

In the work of Rapp + Rapp creates the sublimation of the material a certain tension. Refers not only to the choice of bricks for the village Jonkershove to the currently used Flemish statement that “every Belgian with a brick in the stomach is born” and can Christian Rapp herewith are born and bred German brick culture exhibit, it also plays a pervasive way in on the context. The extremely peaceful and unassuming village seems indeed to have a successful enlargement of a church. Not only because of the location – the hook-shaped structure grasps around the sacred space – but also by the previously mentioned materials in line with the surrounding buildings.

In his distinguished austerity closes the facade off but stateliness breached in the approach to the entrance as it were, on the elbow of the project is located. Step by step along the intimidating silent volumes and Mies-like landscape elements create a suspicion of the richness of the interior that, behind the closed front of the stage tower, opens to the garden, the terraces and the rectory. The façade actually turns out to be the back of the village, a screen. Entering through the floor-high door openings and through the interior continued decking and brickwork give the visitor the feeling still be within the sphere of influence of the adjacent church. 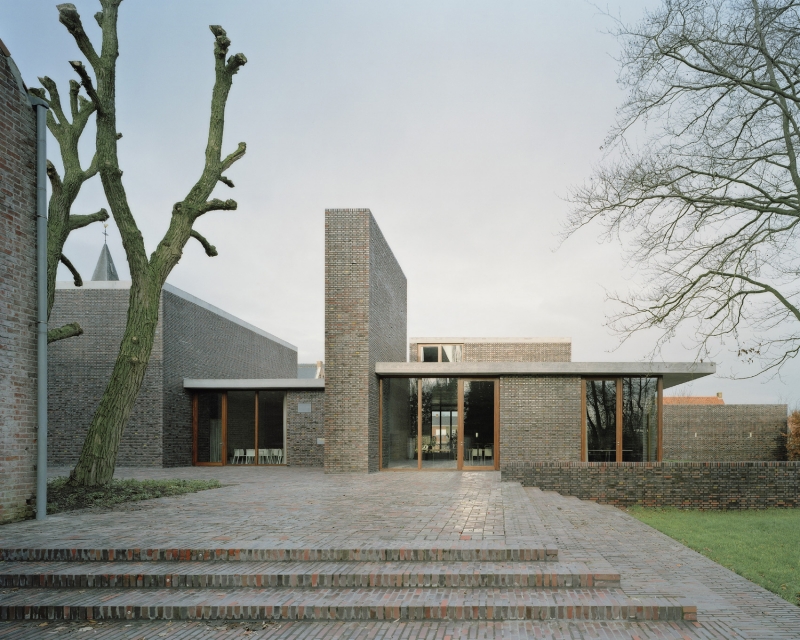 Despite the swirling space, which develops both vertically and horizontally in different directions sumptuous, activity in the cafeteria and the activities organized in the halls and classrooms, the building radiates an enormous tranquility thanks to the materials used. Almost the same atmosphere as it reaches the church of Sigurd Lewerentz in Klippan (S), with the difference that thanks – top overlooking the church tower – senior façade opening in the fly tower and some story-high windows light glides spacious along the walls and the rough dark brick gives an intense glow.

Another plus point of the meticulously thought-out approach is that the landscape articulation by 49 cm thick walls and the virtuoso variation of bricks the visitor as it were mentally ‘knead’. It is preparing for the dynamic linking of volumes that happen to form a space and leave the gold glazed criss scattered brick heads – referring to the former peat-fired bricks – gradually give way to the more numerous applied and more brutal bulging head and stretch layers the solid walls in the interior. In addition, the time can be taken in order to penetrate the volume operation of the exterior. The hall with extendable stand is spanned by a post-tensioned, cast in situ concrete slab with cantilevered edges, the fly tower and the low volumes such as cafeteria and classrooms also received a concrete slab of the same thickness, but without eaves. The narrower the shooting height volume of the chimney flue is finally lined with a brick soldier course. In the interior is the difference between the coverage of the hall and those of the low volumes seen. The concrete slab is indeed bearing in both directions, is packed with reinforcements and possibly the most minimal thickness, making even no savings be tolerated for lighting fixtures. The lighting in the room is attached to the ceiling, while these are integrated with the other rooms.

The influence of Mies van der Rohe, as Christian Rapp himself admits, is not only felt in the delicate composition of the landscape and the minimum transitions between inside and outside, but also in the detailing of floor to ceiling windows and doors. The glass line of these constructions in oiled afromosia timber is located in the center of the adjacent wall, so that the negge on the inside is as wide as it along the exterior. The width of the frame consists of a wisselspanningslat pivoted doors, the frame of the door itself and a fixed glazing bead, a detail which is due to Ludwig Mies.

The finesse of detail has Rapp + Rapp finally put further outside the field boundaries of the village. The village renewal bears their signature. The light fixtures, curbs and above the rhythmic to the village increasing speed inhibitors in the form of three rows of cobblestone between slabs show a profound respect for modesty and fine details.

Buildings can not be constructed as petrified programs of requirements. It is therefore important to create structures in which the time, just as shape and material, is built. As a simultaneity of past, present and future is Rapp + Rapp for the municipality Houthulst signed a village that is not suit for today requested functions, and combining the solemnity of the past with the openness of a future-oriented lifestyle. The wealth from Rapp + Rapp design is also in the claustral facades, the hierarchy of the parts, the consistency, the open- and closed nature and the relationship of the site to the village or town.

Convinced that the philosophy behind the projects of Rapp + Rapp powerful is bundled in the villagehouse Jonkershove, this project description is a revised version of an article by Dominique Pieters for the April issue of “De Architect” (2006).