Beautiful pictures and fascinating stories about projects by Eric Owen Moss, Morphosis, Herzog & de Meuron, Frank O. Gehry, Fumihiko Maki will be combined with a more indepth description of the Salk Institute by Louis I. Kahn in La Jolla.

(autotranslated) ‘Reality ends here “is the inscription that once hung over the front door of the University of Southern California School of Cinema and Television and still the unofficial motto of the school of well-known directors such as George Lucas and Steven Spielberg unleashed on the world of cinema. It would not be a bad idea to this one-liner also be placed on the border of Los Angeles County, because once this thin line crosses – how good you with both feet on the ground stateless this place will infect you. The All-American myth, which any young man or woman to Port to be a success story, seems to assume automatically star qualities in this land of orange farms. The most diverse characters, chefs, bookkeepers, hondentrainers are here looking for the five-point recognition. 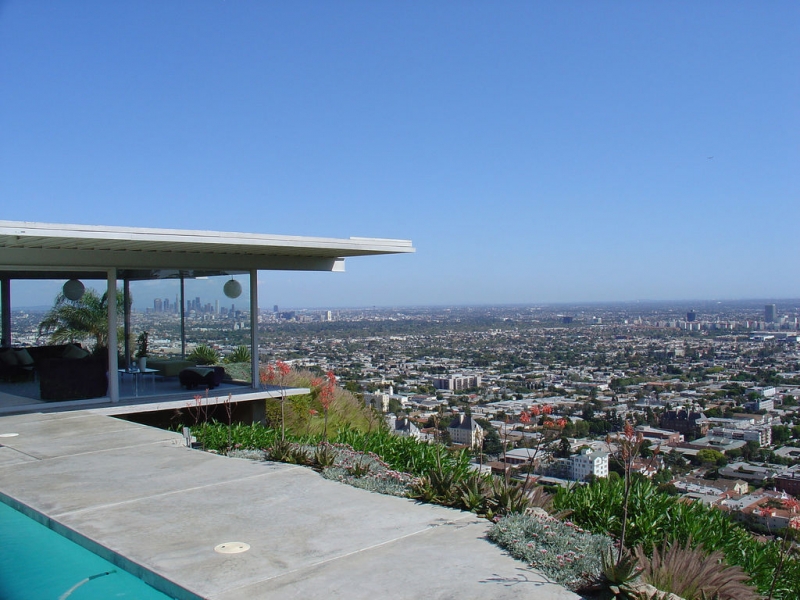 LA is California’s largest city, but the most unconventional. With a variety of different personalities and a lack of any uniform design seems at first glance a terrifying place filled highways and beaches, fast food outlets and theme parks, ramshackle suburbs and shiny residential neighborhoods. But the sweltering city finally rarely responds to the worst expectations. The smog is (usually) bearable, the gangs continue (normally) in areas which are rarely visited by tourists and even the intimidating highways prove to be maniabeler than feared canny visitor. Despite the problems with pollution, urban sprawl and an approximately constant congestion on a large part of the boulevards, it remains a place where many people come to have a new life. The Big Orange is after all a city that drives on fantasy.

Although the city has a significant Spanish and Mexican garrison known until mid-nineteenth century, it was only after annexation by the exploding state of California that it aanmat the dimensions of a metropolis. Add to that film and space to it in the beginning of the twentieth century, and LA takes the place of Chicago in the second largest city in the United States. Made up of individual ‘municipalities’, LA is a model for modern urban development, which makes urban centralization place for suburban sprawl and high-rise. Unlike other places, it is a city without a clearly defined focal point, no place where everyone feels that it is the center of the city. So finding your own center can be an interesting underlying objective for each exploration.

LA is such a large, vibrant whole (approximately 3.844 million inhabitants) which can claim to know the city really well few residents. Someone who lives in Bel Air, will rarely have an undeniable need to investigate Boyle Heights and Baldwin Hills. There are born and raised Angelinos who have never been in Downtown LA, except for a quick visit to the Music Center. This is not a city that promotes awareness of surrounding neighborhoods.

Named after Saint Francis of Assisi, this is a beautiful small peninsula town with breathtaking panoramas from 43 different hills, views across the water, an infinite park on the site of a former sand dune and the mostly white-colored and small-scale buildings dominated by old houses . Along the steep streets of the ‘white’ city are about a dozen districts canned. The hilly terrain deterred the town planners do not advise the use of a checkerboard pattern that ignores even the steepest slopes. Although earthquakes, city fires, drought, land subsidence and other natural disasters has enabled the existence of the city to the test, residents are never long time to rebuild and settle down again without conceding a hair to the vagaries of the nature.

Despite the low number of inhabitants (about 740 000), the city has the status of second most populous city in the United States. Unlike Los Angeles, San Francisco has a beating heart in Downtown SF and also a strong neighborhood feel, each with its own identity, yet overlapping and in relation to each other so that people mix rapidly and districts cross rather than bypass it via one or another highway.

There is no lack of artistic entrepreneurship in Frisco. Actually, even, not a day goes by without coming into contact with an artist, poet, dancer, writer, or at least a well-informed critic. The Bay Area has built its reputation as a breeding ground for experimental and often outrageously work. Therefore flakes artists from any art form here together, after which they move to Los Angeles or New York to go on the market.

Tour guide Wim Supply and Gery Vandenabeele, both members of the Board of Directors of the association Archipelago, do you meet on the basis of the travel program with these contrasting, yet challenging and atmospheric towns. Orderly and schematic maps of the city offer a first look at the complex, 80 to 50 kilometer Los Angeles and the dense and more manageable San Francisco. Beautiful photo reportages and fascinating stories about projects by Eric Owen Moss, Morphosis, Herzog & amp; de Meuron, Frank O. Gehry, Fumihiko Maki will be fruitful combined with a more in-depth description of the Salk Institute by Louis I. Kahn in La Jolla.