Lampens claims not to be in love with concrete, but with the possibilities offered by this material. “The constructive gesture that allows you as an architect, after all, is the first step towards beauty.” 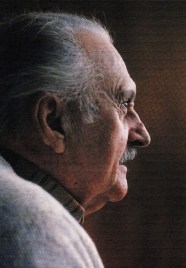 In an attempt to give the built environment a place in culture, community, historical interpretation and the value of identity, distributes Pieter Uyttenhove [1] Belgian architectural scene in three movements [2]. First, there are the architects who take the banality of facades, old farms, castles with battlements and monuments with pediments and columns serious, her aestheticise, out of its context and give a cultural place. Against these reject reality he inserts a practice that transcends the fecklessness and creates a whole new universe full of ideology. So much antipathy there comes forth from his writing for the first two schools, so full of admiration are his words about a third movement that is characterized by a very experimental and personal approach. “Here we look for the originality of form and concept, the power of the isolated object, a headstrong architectural language.” Under this tradition of autonomous work-architecture, he places in De Pinte 1926 born architect Julian Lampens. 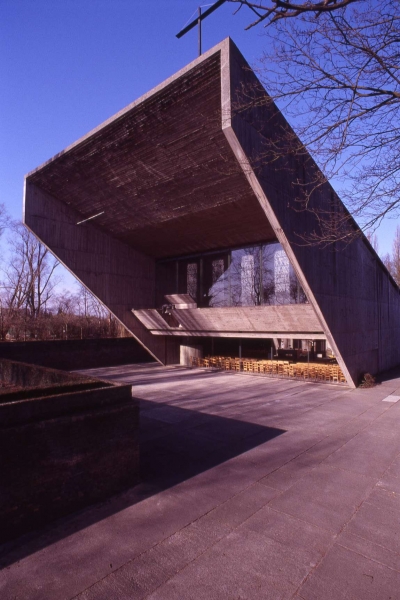 In 1940 he took his first steps at the art school of Sint-Lucas Ghent where he graduated ten years later as an architect. This then strict Catholic school also showed the most progressive architect school of our country so that Lampens here are plenty of modernist vision and his affinity with the work of Le Corbusier and Mies van der Rohe to develop. When starting his own practice in Eke in 1950. Modernism had there been no foothold and built Lampens initially with some classic Modernist details. Only after the 1958 World the tide turned slowly and he could concentrate on the minimalist concrete architecture with honest materials, constructive logical and austerity without folklore. By the shape and material acoustically perfect Chapel of Our Lady of Kerselare (1964-1966) finally the breakthrough. About his love of concrete he says in an interview with Koenraad De Wolf [3] ,, Brick remains one of the best materials, but unfortunately the uses are limited. I’m not in love with concrete, but the possibilities offered by this material. The constructive gesture that allows you as an architect, is indeed the first step towards beauty. “

Although Juliaan Lampens teaches already since 1974 at Sint-Lucas Ghent (since 1985 as a professor) and has trained a large number of architects, the name of this example architect is hardly to be found in publications and book chapters. Luckily, he knows unprecedented fame in the slightly more mature small circle which has more in touch with modernity than the young. However, the recognition of the work of concrete architect Julian Lampens is growing steadily. In 1991, the art center deSingel in Antwerp took a retrospective in 1995 and gave him teh Great Architectureprize of Belgium. In 2003 he was represented at the Mostra Internacional Projeto Rio Arquitetura (Miar) in the Brazilian Rio de Janeiro. Some alumni and former interns founded the association Juliaan Lampens. They identify its archive with the intention of making it accessible to students and manage the asset. Next year, at the eightieth anniversary of Lampens, an exhibition held in the College of Science and Arts, campus Sint-Lucas Ghent. In time, she plans to long-awaited monograph.

1 Engineer and architect, urban planner and professor at the University of Ghent, Department of Architecture and Urban Planning.

Fn3. The interview was conducted on the occasion of Lampens’ drawings and sketches exhibition at the Museum of Deinze and the Leie, from 4 May till 12 June 2005.