Neutelings is not afraid. He does not walk around the danger, he crosses the middle. He enters the enchanted forest, equipped with a compass that he owned from his time at OMA and perhaps also a talisman of the apocryphal Antwerp shaman Luc Deleu.

(autrotranslated) The modern architecture was accustomed to regard themselves as the sole legitimate interpreter of modern times. That legitimation from above, she can not now assert: we now know that the true face of modern is a multitude of languages, a chaotic coexistence of various contradictory systems form. About this crowded field of choices is the threat of complete arbitrariness in which every choice is indifferent and meaningful premiered impossible.

But the authority of modern architecture is exposed to a more fundamental attack. Modern communicationmedia devalue the architecture and draw around us a tangible environment in which the built frame only acts as a screen or a prop for information carriers. In this perilous force field is today modern architecture, lucieder and more fragile than we had come to expect, without authority but pride. But Neutelings is not afraid. He does not want in a bow to the danger zone around, he wants the middle. As he enters the enchanted forest, equipped with a compass that he has of his time at OMA and perhaps a talisman of the apocryphal Antwerp shaman Luc Deleu.

The contradictory forces work with great violence on him. Each of them is Neutelings equally sensitive to both the silent pride of the defenseless architecture as the seductive lure of her attackers. “The program and the location as a starting point”: it is the narrow but inalienable basis on which to build reasonable. Once this sober, almost stiff carcass is there, he puts the satyrs on the loose, who have appropriated in no time. 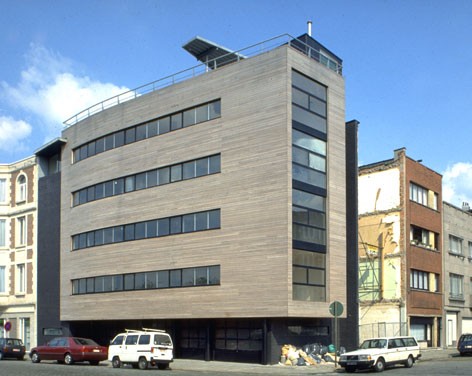 Willem Jan Neutelings
77-86 majored in architecture at the Polytechnic University of Technology. In the period from 81 to 86 he was a member of the Office for Metropolitan Architecture in Rotterdam. In 1986 he wrote a thesis study on ‘Ring Culture’. In 1987 he opened his private architects office in Rotterdam and Antwerp. In 1989 he was guest assistant Architektuurakademie in Rotterdam. Since 1989 he was a visiting professor at Delft, Leuven, Darmstadt, Barcelona. In 1990 the Singel dedicated an exhibition to his work and published “WJ Neutelings in Antwerp “(text Paul Vermeulen and WJ Neutelings).