Slowness of the designs in the house Rotelenberg by De Vylder Vynck Taillieu architects. The building owners Ellen and Peter Meurez Bodyn give their story with quotes from their books and experiences throughout the entire process. 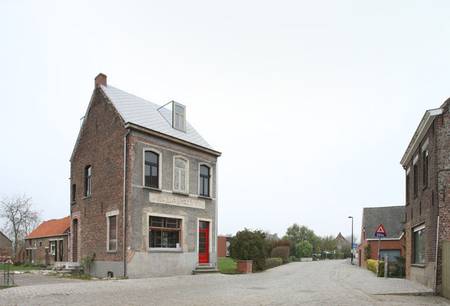 from the Book Blog “Contemporary architecture” by Steven Lemaire

(autotranslated) At the foot of the Koppenberg is a former and long-abandoned village pub as well as former family home for eleven children. A house with a history so. After four years of remodeling would you also another form of ‘ex-being’ expect.

What happened to this house since 2007, the owners describe themselves’ first book two. Almost in a moving and compelling way you get an idea of ​​the inertia of the design here as well as the close involvement of the client to the design process. With the motto: “do not know what you want, look for what you want” builder Pete and Ellen decided to turn to architects devylder vinck taillieu. Budgetary it was not possible to get hold of all in a single movement. There were so step by step and well thought-out choices to be made. Ecological ideals as well as simple, self-sufficient and of course life would result in a prolonged and perhaps interminable ‘work in progress’.

A very strong collaboration between client and architect – that even the builder made them models – was also needed one wanted to come to this personal and strictly customized family, measured and fully functional. The charming imperfection, often typical in the work of Jan De Vylder is still very present. (…)

After some preliminary designs of the architect finally came to the idea of ​​‘a house into a home. “ All interior walls were demolished, until only kept the carcass of ancient outer walls left standing. In this way, a giant inner space was created. That cavity could then be built up from scratch. In the current, rough house and was in stark contrast with panels and doors of industrial greenhouse glass a new house built. The Doka formwork system, which is used in construction to pour concrete slabs, was visibly used as a huge Meccano to build floors. The concrete version of the new house was never paid, however; the shelves were just standing. 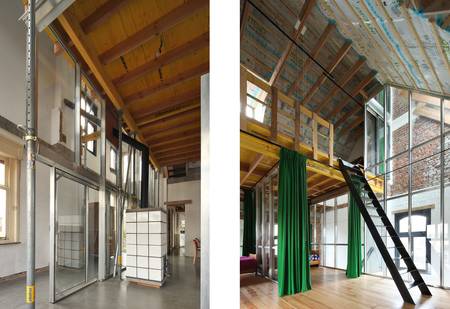 The great engagement between architect and builder is even more evident when a student is staying with the couple for two weeks! This led among other things to the idea to recover the wooden planks from the broken floor of the first floor to the formwork for ring beam. The soft, vertical prints of grain in the fir trees give the new ring beam along in a lighter and more frivolous appearance. Such ideas arise only at the yard and came about thanks to the inertia of designs that the client gave the architects.
The new, smaller volume, composed of sliding conservatory walls and Doka statements, including the living room, two children’s bedrooms and an attic. In the adjoining building out behind the kitchen and the bedroom of the parents.

As a result of the choice of a glass house in a stone house could be the resulting output (located on the south side) between them employ as wide cavity. The entire outside wall cavity and glass interior walls acts as a climate buffer. Together, the redundant wall, the sliding elements and the (homemade) hearth far to inhabit the house according to different regimes. In the winter, yields the heater supplies enough heat for the “small” house, which thus, thanks to the shaft between the greenhouse glass, and the outer wall is sufficiently insulated. In the summer of the corridor, the panels can be slid open to a larger, airier place.

Jan De Vylder emphasized that many interventions have arisen in the first place by resolving structural or economic / ecological defects and not by a mere poetic impulse itself. There was need for a new, better insulated roof. The existing walls were not as thick as the standard requires today: they never could wear a new roof. The new bar that was placed suddenly became visible to lie. They chose to form a new, interesting picture with this element and mirrors against the passages: a mirror ring beam! “That not only makes for a bizarre perspective but also seems to link the roof detached from the walls.

The tiles for the northern, extra wall insulation requirement were introduced, so were based on a clear need. To maintain the illusion of the original brickwork was decided on the slate this underlying bricks redrawing. Designing the appropriate prints on the slate took office DVVT half a year! Indeed, the fact that the builder Piet Bodyn one by one, the nine windows slate itself handedly has finished with a spray gun. 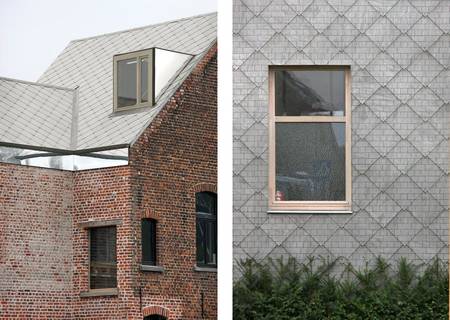 Sliding glass conservatory walls, Doka scaffolding and old visible remnants: it is not for everyone. Within this personal and strictly custom family taught the young family otherwise live together. Thus the two children’s bedrooms upstairs living quarters no more than two identical glass booths right next to each other, where the space was simply duplicated. At the front the rooms are open and running so into a common area. Do the kids want more privacy, then they close by large green curtains around their own zone off.

But for true seclusion or intense concentration there is only a privilege that belongs to one resident at a time. The attic, accessible via a steep staircase, is therefore intended as a “think little tower or studio-to-one individual. It is there that you are the window of the “mirror chapel ‘can open up and so are literally have your head in the clouds. Yet you do from here still in contact with all the other floors through the large void; the wide cavity zone of the housing. This L-shaped corridor, along which you on the ground also are welcomed too, so it is fully open to the roof and confronts you in a moment (again) with the old house. Old elements that were laid bare, were no longer hidden. If the large glass sliding door of the conservatory opens you can enter the new “house in house”. Through this strategy, it is noticeable that has received a new guest with respect for the old original house.