Mangado defends a spirit of creative research apart from “a priori credos” or conventions, in a naked confrontation with the design problem, which he compares with the art of bullfighting. 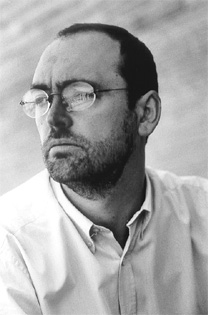 Who accompanied us last year at the annual trip will certainly work are not unfamiliar. Due to circumstances we did not then have the opportunity to understand the full realization. A good half year later we put it right and let the word during a lecture on “(external) Francisco” Patxi “Mangado”: http://www.fmangado.com.

Francisco José Mangado Beloqui was born in Estella in 1957 and graduated from the Architecture Department of the University of Navarra in 1981. As an influential teacher and critic, prolific designer and bustling present on the Spanish national scene, he is currently a key figure on architecture in Spain . Together with other Eduardo de Miguel, he reorganized the School of Architecture in Pamplona contemporary design standards, which he built up a master’s degree with national and international guest lecturers. Himself, he was a visiting professor at universities in Barcelona, ​​Madrid, Texas, Harvard and now at Versailles, Paris.

Mangado is an ‘architect’ architect, in the sense that he submits the design to rigorous intellectual inquiry where nothing is simply assumed. He defends a spirit of creative research apart from “a priori credos” or conventions, in a naked confrontation with the design problem, which he compares with the art of bullfighting. Initially, the resulting work may prove difficult to grasp, because stylistically little familiar reference points property, however it stands very firmly on his own formal premises. All his projects show increasingly strong control … from overall concept to the smallest detail.

Mangado received in his career swift attention with projects such as Plaza Carlos III ‘from 1987 and’ Reall Marcus Winery “from 1990. He himself sees his studies for a non-built hotel in Pamplona ‘from 1991 and the competition for” Castile Leon Concert Hall ‘of 1994 is of greater importance for the development of its own idiom. In recent years, some large and beautiful work of his office delivered. The main one is undoubtedly the ‘Baluarte’ building (Palacio de Congresos y Auditorio de Navarra). Recent first prizes in major architectural competitions (including Centro Municipal de Congresos y Exposiciones de Avila …) ensured that he belongs in Spain until the principal architects and internationally his name is always to ignore less. 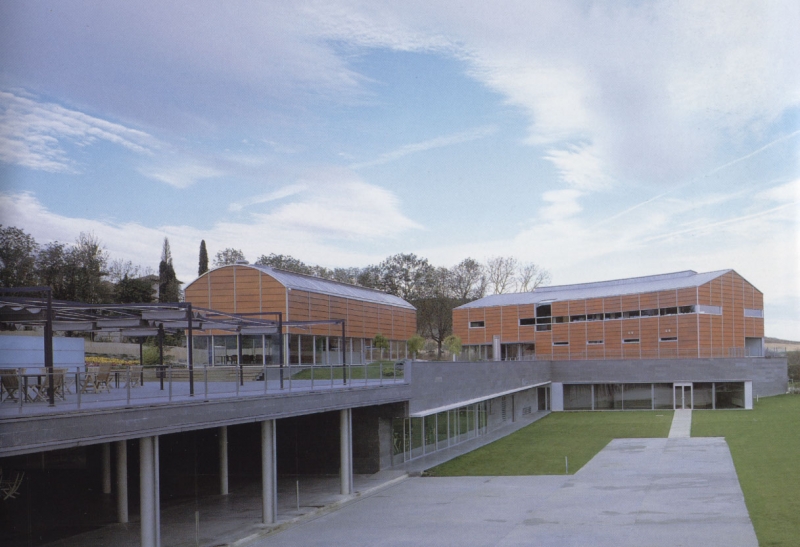 The program of this mission contained sports facilities (pool, gym) and a golf course, to organize in an environment where landscape, historically valuable and well preserved buildings (el Señorio de Zuasti) and ruins are intertwined. Mangado’s aim here is to create a playful garden suggestive open to improvised use through well equipped with specific but not formally programmed intervals. In that spirit, the two freestanding pavilions furniture, light in appearance almost moveable, simple in composition and sleek finished with tropical hardwood panels. The arrangement of the buildings generates within the wide landscape a modest scale in relation to the existing buildings.

The various components are organized along a route that links the gateway to the existing buildings (also adapted to their new positions). The sloping landscape is gradually divided into a series of terraces which allowed him to the cafeteria and indoor partially buried under the upper deck and features a glass facade that looks on a lower terrace. Two discrete buildings (one includes a bar, the other dressing rooms and gym) are intuitive, in response to the landscape and views, placed along the upper terrace and take as it were in the place of the former appurtenances. When night falls is on the upper terrace (between the entrance and bar) continuous low glass wall of the main exposure of the site. 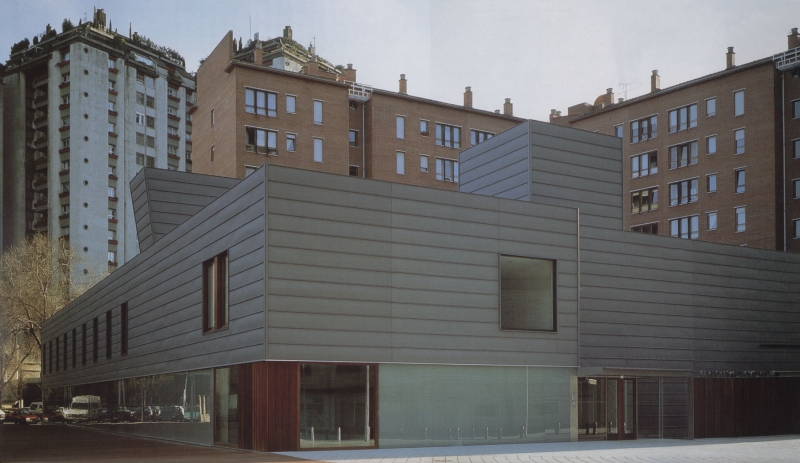 Urban, which neglected and abandoned-looking, context dating from the 70s and is within walking distance of the west of the old city near the citadel. The building intertwined with the existing context was impossible. Want to split the program into two parts, the architect used the configuration of the parcel in order to design a building in L-shape. The block thereby close it was the best way to preserve the quality of the internal spaces. All of the building’s closed character declares a sink and layered, frosted glass bunker.

Despite its modest dimensions (basement, ground floor and one floor) with 60 meter frontage on each wing, the building is not smothered under the weight of the heavy nearby apartment blocks. Two turrets breaking the soft profile, provide relief within the line of the building and also provide light from above. The consultation rooms are made visible on the outside and assured of complete privacy by the armed, frosted glass, and double skin wooden trellis on the north side. That choice makes for an interesting facade texture and allows limited views of the surroundings. The waiting rooms are directed to the center of the block and thus ensure peace and tranquility.

The two wings are connected by a three-level high-light source. This, on four sides glazed node will directly lead to a clear view of the internal organization without making the necessary physical separation in jeopardy. The entrance and reception, the circulation node is placed in the zone and enjoy the calm, spacious, light-overload zone, visitors are greeted upon arrival. 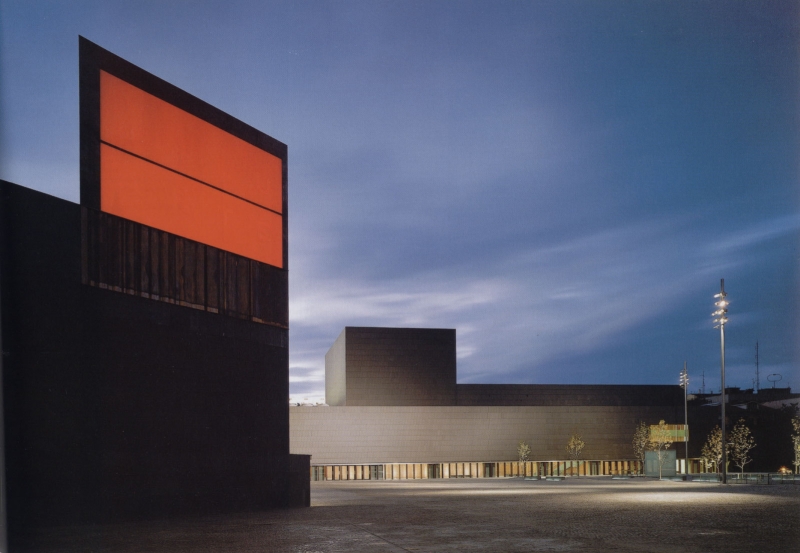 In 1998 the government of the province of Navarra organized a competition for the realization of a congress palace and auditorium of Pamplona, ​​which was won by the architect Francisco Mangado. It concerns the design of the main, both qualitatively and quantitatively, building in the historic center of the city situated along the Citadel, a transition zone between the old center and the recent expansion of the city. In the collective memory was the building site, a void left after the demolition of some blocks, associated with the image of a large, open space. The proposal contained in this respect, one basic idea, namely the renunciation of the autonomous object and realize a project with clear urban character in conjunction with the environment.

To this end, the volume represents an L, which both enter into a dialogue with the heavy walls of the citadel and the other a large, opening itself to the old town square surrounds. This also provided that the building and square form a whole in the sense that the square continues into the interior floor of the building. The halls are conceived as autonomous blocks configured according required dimensions and functional standards in relation to their purpose. The spaces that surround these boxes contain offices, changing rooms and features that serve above and connect.

One of the wings was completely reserved for the large hall (1750 persons). In the angle of both wings is located a second smaller room. In this node, we find the entrance and lobby, a large space, open over the full height of the building and generously illuminated by cylindrical skylights. The wing parallel to the citadel and “La Avenida del Ejército” is entirely reserved for exhibition halls and conference rooms. In the cellars you can see the foundations of the former ‘Baluarte de San Anton’ … .vandaar also the name of the building.

Like other works by Francisco Mangado ensure proper organization of the different spaces, a strong balanced materials and perfect detailing coherence. The facade is clad with black quartzite tiles that are always vertically offset a third of their width relative to each other. The ground on the inside of the L is fully glazed in heavy wooden profiles. Both on the square (granite gray) and building (facade and interior) the choice of materials were perfectly matched.

The building was opened in November 2003 and has since appeared in several international publications (eg. Casabella March 2003) appeared.