In Memoriam
This week a fine article was published by Domus, written by Matthias Van Rossen about the impotence to unite contemporary architecture and Bruges. 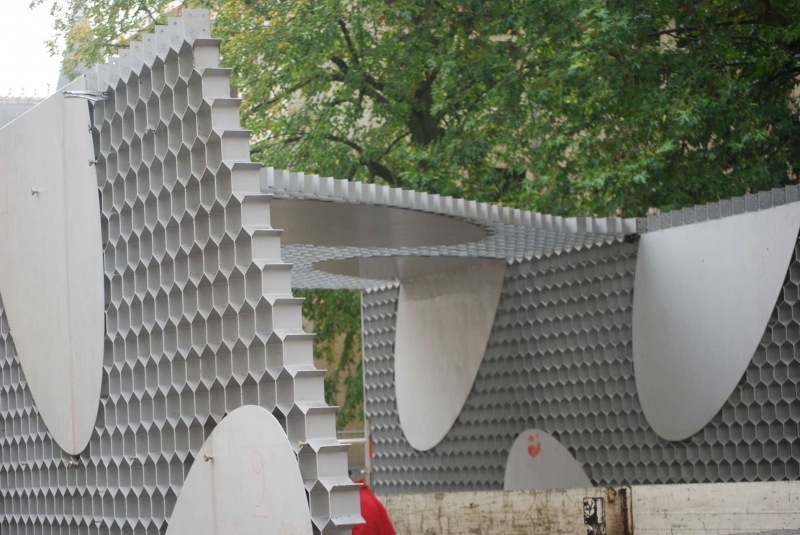 Dismantling the pavilion designed by Toyo Ito after more than seven years of long political debate, Bruges continues to question the meaningfulness of contemporary architecture in historical urban centres. And the result is a step backwards in time.

On the 17th of March, Toyo Ito was awarded the Pritzker Architecture Prize and on the 5th of November the city of Bruges removed one of his rare European realizations. Toyo Ito won’t easily forget the year of 2013.
The aluminium honeycomb structure of the Bruges pavilion was carefully cut into pieces and transported to a warehouse for storage. Toyo Ito wished to keep the temporary pavilion he had erected back in 2002. [1]
The removal of the pavilion was preceded by more than seven years of long political debate in Bruges and Flanders. Since a forklift heavily damaged the floating floor in 2006, it was in need of a thorough renovation. The so-called bridge with all lighting fixtures had to be removed. When maintenance problems arose, the circular reflecting water pond was eliminated, only to be filled up with plain gravel. Without the pool, the outside skin became object of vandalism.
From then on, there was no more floating on water, no more electrical lighting, no more water reflections. Only the aluminium structure with transparent polycarbonate plates was left. The pavilion definitely lost its poetic aspects of weightless and blurring architecture.
The estimated renovation costs rose year after year. The Flemish government wanted to bear a good part of the costs, Toyo Ito proposed his services for the renovation, but the city of Bruges did not feel the pavilion was worth it.
Marc Dubois, architecture critic, feared the international press would perceive its demolition as “some form of cultural barbarism”. [2] Is its demolition mainly due to cultural ignorance? After all the pavilion lost most of its poetic expression and significance during its latest years. The pavilion was very present on the square and you could not escape its powerful effect. Maybe it was therefore too confronting for some.
The pavilion was erected in 2002 when Bruges took the title of European Capital of Culture. Toyo Ito was asked to show the potential of new architecture in the historical urban context. This was an important theme for the city since it was listed in 2000 by UNESCO as a World Heritage Site. Much like the Barcelona pavilion by Ludwig Mies van der Rohe, the brief asked Toyo Ito for a temporary pavilion without any function, “an architectural provocation of high quality. A symbolic return to the historical roots of a city, as well as an optimistic expectation of the living future of the city. (…) The building has no other functions than to be an architectural statement. When Mies Van der Rohe was asked to design a pavilion in Barcelona, he was told to do ‘something’ (without function). Our demand is the same.” [3]
Wasn’t it exactly that precise lack of function, of event, that put the pavilion in that delicate and fragile position? Bernard Tschumi reasons that “only the striking relationship between three levels of event, space and movement makes for the architectural experience.” [4] The meaning of the pavilion had become unclear. Without event, the architectural experience is not complete. The year event of European City of Culture is long over now. Hence the concept of temporary pavilions without function for temporary events.
Where is the boundary between art and architecture? The pavilions design offered new ways of observing, reflecting and moving. It was a sensual promenade over the square. It forced people to traverse the square through another path and watch the historic surroundings from a different point of view. It was a piece of blurring art that enhances the sensing of the surroundings and the environment through a floating floor, transparent construction and reflecting water pond.
Geert Bekaert (1928), Belgium’s most important architecture critic of all time, described the pavilion extensively: “After all, the pavilion is the opposite of what’s standing around it, the heavy impermeable stone façade architecture. It’s not confronting the latter, but metamorphosing it, disposing it of its weight and heaviness, absorbing it in the detachment of its play.” [5]
It had a minimalistic aesthetic with an emphasis on transparency and lightness through a complex and fragile skin that dissolved the boundaries of architecture. This pavilion was the result of utmost creativity and courage of the architect. As a result, it required a similar amount of commitment for full understanding and proper maintenance. Its minimalistic aesthetic made it subtle, but also fragile and vulnerable to any minor but improper intervention. Essential and minimalistic design does not support any partial deletion without losing the majority of its substance and significance.
By the removal of the pavilion, Bruges continues to question the meaningfulness of contemporary architecture in the historic city centre. This pavilion was the result of a search for new architecture. It had to make place again for historic architecture. The result is a step backwards in time. Is Bruges succumbing to some sort of disneyfication where the real is not real?
Matthias Van Rossen, architetto (@matvanros) 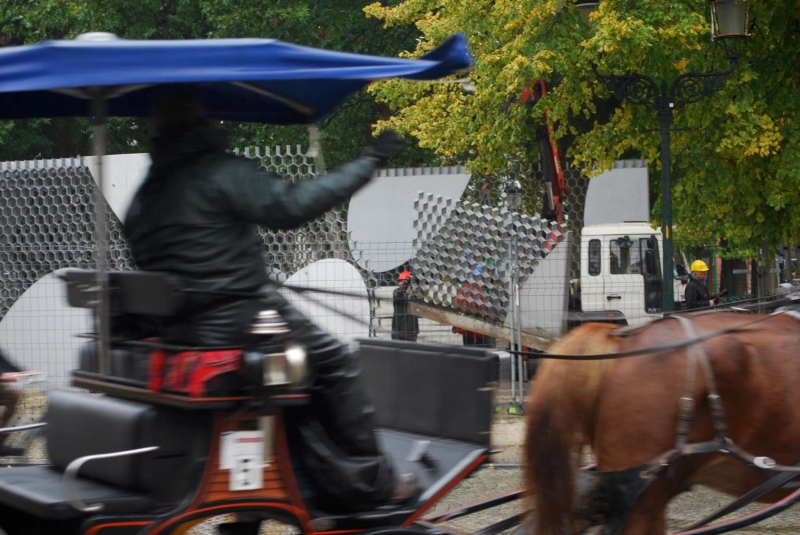