The Center Pompidou in Metz presents two exhibits two Japonese exhibitions: the architecture expo’JAPAN-NESS’ makes a connection from 1945 to the present and the art expo ‘JAPANORAMA’ depicts Japanese contemporary art after 1970’s. 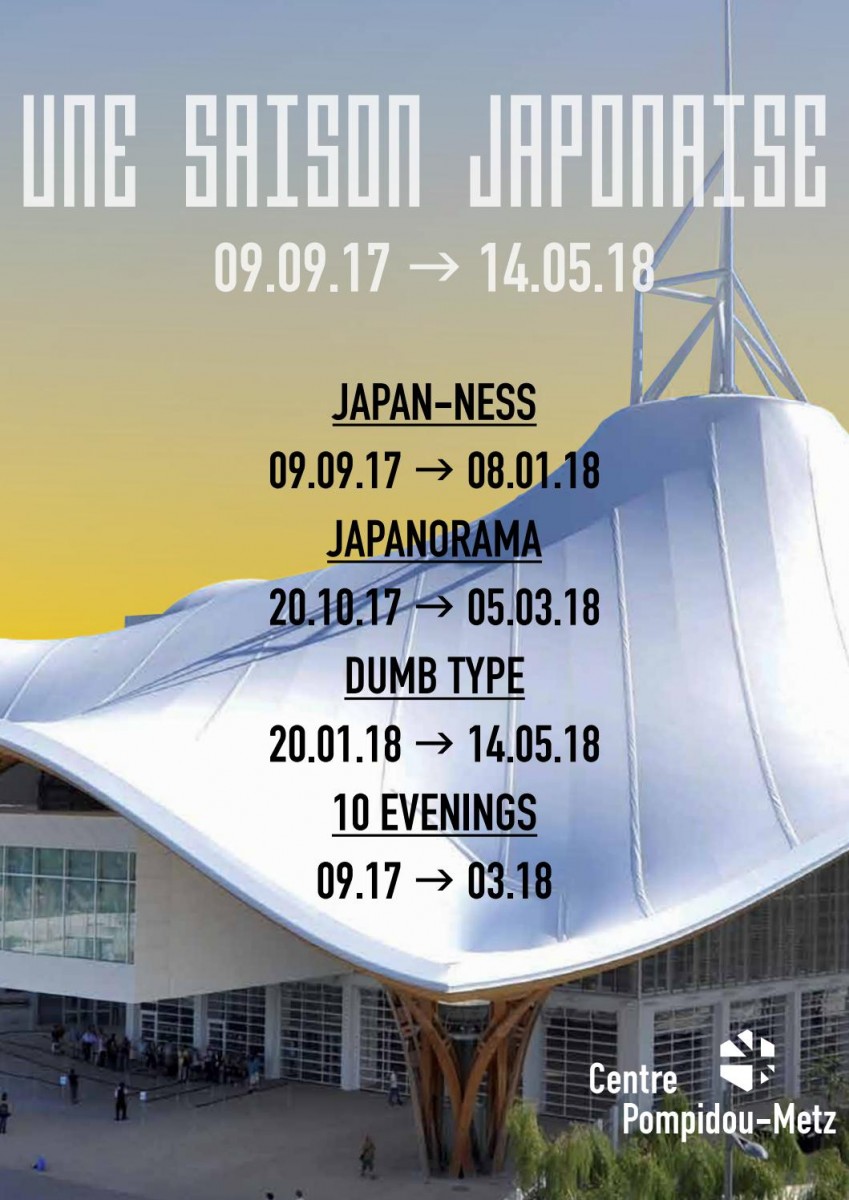 The Center Pompidou-Metz is immersed in a Japanese atmosphere this autumn.

*JAPAN-NESS | brings an overview of Japanese modern architecture from 1945 to today.


Archipel wants to put a visit on the agenda and organizes a * two-day trip to Metz * for enthusiasts and of course also as an introduction to our Japan trip 2018.

The exhibition, based on an idea by Arata Isozaki, shows us how Japanese architecture developed between 1945 and today. The atomic bomb of Hiroshima is a painful turning point in Japanese history, but also the start of a powerful resurrection. Hiroshima is the opener of the exhibition. How has Japan dealt with this trauma and how does Japan deal with sensitivity to earthquakes or the limitations of extremely high urban density? These are the themes that, on the basis of many original documents, show six decades of Architecture and Urbanism.

The scenography of the exhibition was conceived by architect Sou Fujimoto. Original drawings and sketches, beautiful blueprints and yellowed plan prints, books and magazines, small refined models, but also large space-filling installations. Slide projections, film fragments and as a closing a huge mobile of photos give you the chance to get lost in the diversity of Japanese architecture.
The exhibition has a chronological course and goes symbolically from black to gray to white. From pressing dark to airy and light. From despair to hope and open-minded youthful optimism about the future.

1. Destruction and reconstruction (1945).
The unexpected radio message of Emperor Hirohito made him human and brought a major social change.
2. City and territory, a ‘work in progress’ (1945-1955).
The individual’s question in a fast-running industrialization. The ideas of Le Corbusier influence Kunio Mayekawa, Junzo Sakakura and Takamasa Yosizaka and make them masters of brutalism with a strong economic and socially oriented architecture.
3. Rise of Japanese modern architecture (1955-1965).
The rapid economic and industrial growth requires new buildings at a very rapid pace. Kunio Maekawa, Junzo Sakakura, Kiyonori Kikutake, Masato Otaka, Kenzo Tange and Arata Isozaki are the protagonists. The Tokyo Olympics 1964 with the Yoyogi National Gymnasium by Kenzo Tange are the spearheads.
4. Metabolism, world exhibition of Osaka 1970 and the new vision (1965-1975).
Young architects from all over the world look admiringly at the Expo’70 buildings in Osaka. Megastructures, inflatable structures, brightly colored ‘pop’ culture with players like Kenzo Tange, Kisho Kurokawa, Kiyunori Kikutake, Arata Isozaki, Itsuko Hasegawa, Kijo Rokkaku, Minuro Takeyama, Kazumasa Yamashita and Kiko Mozuna.
5. Disappearing architecture. Conceptual and light (1975-1995).
The new generation breaks with the idealistic optimism of the 1970s and the explicit technological architecture that is useful to the industry for them. Minimalism makes its entry with Tadao Ando. We see a more philosophically inspired structuralism with Takefumi Aida and Hiromi Fujii. Others, such as Shin Takamatsu and Hiroshi Hara, again opt for a more explicit architecture of ‘self-sustainable machines’. The light constructions of Itsuko Hasagawa give a fusion of structure and material. The ‘disappearing’ architecture gets its peak in the figure of Toyo Ito.
6. Overexposed architecture, images and stories (1995-present).
Where previously only a few Japanese architects received international recognition, this has changed since 1990 when Japanese architecture emerged as one of the most creative. Figures like SANAA (Kazuyo Sejima and Ryue Nishizawa), Kengo Kuma and Shigeru Ban are the best-known pioneers of a whole generation of fascinating designers. Some sixty projects are shown on floating panels as a large mobile. An architectural promenade.
7. Architecture and Design, new graphic identities.
The importance of books and magazines for the development of new radical, artistic and architectural movements is expressed in the final chapter of the exhibition. Japanese art and architecture are confronting the Western counterpart.

120 architects will be discussed … and we will learn that about 20 buildings / projects that have a place on the Archipel travel program are also present at the exhibition.

This exhibition, in a scenography by SANAA and curator Yuko Hasegawa, puts contemporary art in the spotlight after 1970 and the world exhibition in Osaka. At that moment a movement arises that detaches itself from the Western influence and looks for a modern expression of the Japanese cultural identity.
The hyper-consumerism of the Japanese and the speculative economy in the 1980s brought together “mainstream”, pop culture and academism.
Japanese artists develop aesthetic strategies in two main movements: the materialistic (Mono-ha) and the conceptual (Nippon-Gainen-ha).