Philip Johnson takes us on his 40-acre estate in New Canaan, Connecticut – his own laboratorium- and supplies the necessary witty and humorous commentary. 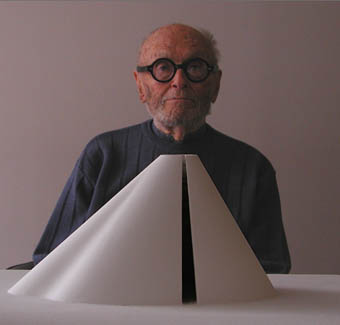 (autotranslated) The American architect Philip Johnson (Cleveland, Ohio 1906-2005) studied in the twenties, art history and philosophy at Harvard University in Cambridge, Massachusetts, where he was a decade later an architectural study. He became one of the most important American architects of the twentieth century, who brought different influences and styles into the United States. In 1932 he was as a director of the architecture department of the MoMA an important contribution to the breakthrough of Modernism in the US with the exhibition the International Style. In the forties he started his career as an architect and representative of rationalism. It was then that he realized his famous Glass House, heavily influenced by Ludwig Mies van der Rohe. In the eighties he reached his peak in his frivolity and tend to the spectacular and show the designs from that period icons of postmodernism. Also this movement he says goodbye when he organized the exhibition Deconstructivist Architecture in 1988 at MoMA.

Diary of an eccentric architect (1996) is a documentary in which Philip Johnson takes us on the 40-acre estate in New Canaan, Connecticut and provides the necessary witty and humorous commentary. The camera goes back to the famous Glass House which the landscape acts as “expensive wallpaper ‘and contrasting to the adjacent hospital where sensual light swirls inside despite the fact that it possesses no windows. Is also his extensive collection of contemporary art discussed and followed the various design and construction phases of the new visitor center. This film shows the eccentric Johnson at work and emphasizes the importance of his architectural activity, the final construction and how buildings can correspond with their immediate surroundings, in this case with autumn leaves or snow from New Canaan.