Besides recent and less recent architecture we also want to show the typical Danish / Swedish care for the exterior (landscape architecture and urbanism).

(autotranslated) On June 16 we left for a first exploration of the next trip to Denmark & ​​Sweden. In terms of program, we rely on the trips Dominique Pieters recent years organized to Copenhagen and the Archipel trip to Denmark about 15 years ago. After consultation with Dominique and Chris Vermandere we decide to set provisionally for the program to limit the Copenhagen metropolitan area and on the other side of the Øresund cities Malmö and Lund.

The first day we concentrate on the Swedish part of the program. We drive to Klippan, about 80 km north of Malmo to see St. Peter’s Church (1963) by Sigurd Lewerentz (1885-1975). Immediately a first highlight: the tactility of the ubiquitous brick & the contrasts in light-darkness create a strong, quirky atmosphere. Then we drive back south and visit the university town of Lund. First and foremost, the recently renovated Skissernas Museum (2005) by Johan Celsing & in the center of this charming town two impressive buildings of Class Anshelm (1914-1980): the Konsthallen (1956) and the Town Hall (1964). Once in Malmö we visit the Konsthallen (1973) Class Anshelm & just down the Konserthuset (1935) by Sigurd Lewerentz. We end our visit to Malmö with recent architecture in the port: a site visit to the university building Hurricanes Diener & Diener and an exploration of a new residential Bo.01 in the harbor district Västra Hamnen.

The third day the weather is better disposed towards us: under the bright blue sky, we cycle through the center of Copenhagen. In the historical center we see among others. the Royal Library (1999), Schmidt Hammer Lassen, the Unibank office (1999) Henning Larsens Tegnestue, the National Bank (1971) by Arne Jacobsen & the recently completed Opera (2004) by Henning Larsens Tegnestue. Then we cycle through Christiania to a part of the harbor where we see two works by Dorte Mandrup: an office hotel in a renovated seaplane hangar (2001) and an office building (2003) We stabbing the water again about and exploring the northern part of Copenhagen continues: the DFDS terminal (2004) and an office building (2002) of 3 x Nielsen, the office expansion DUF (2004) ONV, the housing complex (2004) by Lundgaard & Tranberg, a nursery (2004) Dorte Mandrup. We end our bike trip in the southern part of Copenhagen’s harbor and the new developments in Ørestad: we see among others the harbor pool (2003), a maritime youth (2004) and a housing complex in Ørestad (2006) Plot. 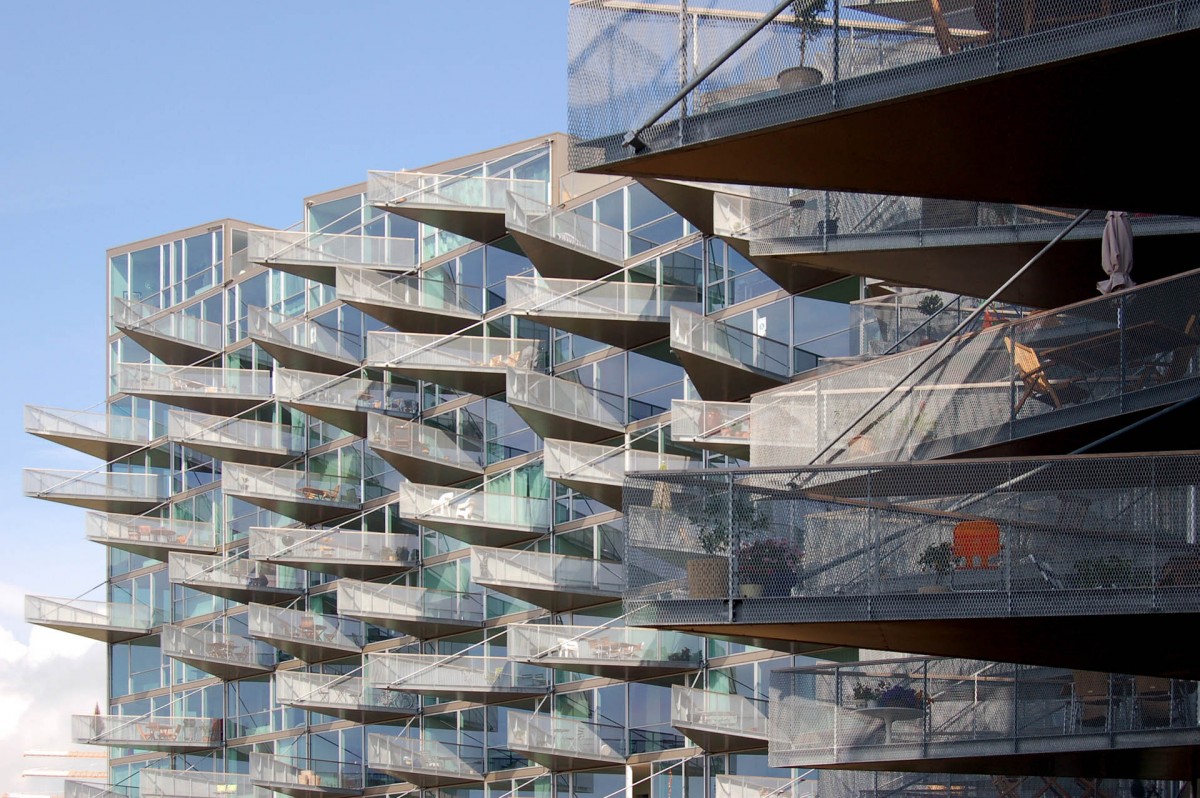 The last day we focus on the area north of Copenhagen. We start with a visit to the redevelopment of the Tuborg harbor: a combination of residential, office complexes and again care for the public space. Then we see a series of buildings of Arne Jacobsen Klampenborg: eg. the Bellevue Theater (1937), the Søholm dwellings (1950), etc … Further along a coastal park of CN Brandt in Hellerup. In the afternoon we finally reach the handsome Louisiana Museum (1956) Bø & Wohlert, a series of exhibition spaces around a landscaped garden. Then we visit the Fredensborg housing of Utzon and then finally go back to Copenhagen. There we visit a number of impressive cemeteries GN Brandt (including the Mariebjerg cemetery, the cemetery Bisbepjerg, Ordrup cemetery ….) And the renovation of the Kildeskovhallen (2002) by Entasis.

After these four days it gradually became clear to us that not only the (contemporary) architecture must be addressed in the travel program. Besides recent and less recent architecture we also want the typical Danish / Swedish care of the exterior (landscape architecture and urban) show.