Although it is essentially a Aalto trip, we have spotted a lot of interesting and impressive architecture, both from the period before and after and even contemporary.

Although primarily an Aalto trip is, we have yet discovered many interesting and impressive architecture, both from the period before and after, and even in our modern tradition. Some names: Lars Sonck, Geselius-Lindgren-Saarinen, Eric Bryggman, Juha Leiviskä, Aarne Ervi, Gullishen, Vormala, Heikinnen and Komonen. For many, perhaps today names without much meaning, but after the trip they might as familiar as Fernando Tavora and Eduardo Souto de Moura. “

“Alvar Aalto, actually Hugo Alvar Hendrik (° Kuortane, February 3, 1898). Finnish architect and designer of furniture. After he graduated architect to have Helsini, where he worked under Lindgren, he focused on building houses, factories, theaters, churches and other buildings. His activity as a furniture designer testify wood Artek furniture. He was successively established in Jyväskylä (ca. 1924), Turku (1927) and later Helsinki, where he designed by him, but little known inhabited house. “As stated in the Great Winkler Prins (1974 edition).

The Alvar Aalto trip (no less than 28 works) brings us a break-out by Finland, almost a chronological overview of his most important work. The stops are: Jyväskylä, Säynätsalo, Tampere, Prick Kala, Noormarkky, Turku, Paimo, Hvittrask, Otaniemi and Helsinki. A serious journey through a (hopefully) snowy landscape bathed in low light. The work of Aalto’s architectural history. Canonised (rightly) as one of the greatest architects of this century, his influence on generations of archi-tects no longer meten.Van 1923 (start of his career in Jyväskylä) to his last work in the same city (two years after his death completed in 1978), he achieved a groundbreaking body of work which must be experienced on the ground to understand its essence. How humanism were reconciled with rationality, modernity with tradition, culture with nature … What relationship is entered into with the landscape. How light is a spatial experience. How coherent concepts linked from site to detail …

The work of Aalto is naturally complemented with works by contemporaries such Bryggman … (on which a lecture evening in December, the little known but extraordinarily interesting work will explain). But also to recent work by Finnish architects (Heikinnen & Komonen, Tommilla, Kaarina Löfström, Leiviskâ, Aithaho & Viljanen etc …) attention.
Also, recent work by Steven Holl, which already surprised us in Japan, will be discussed. 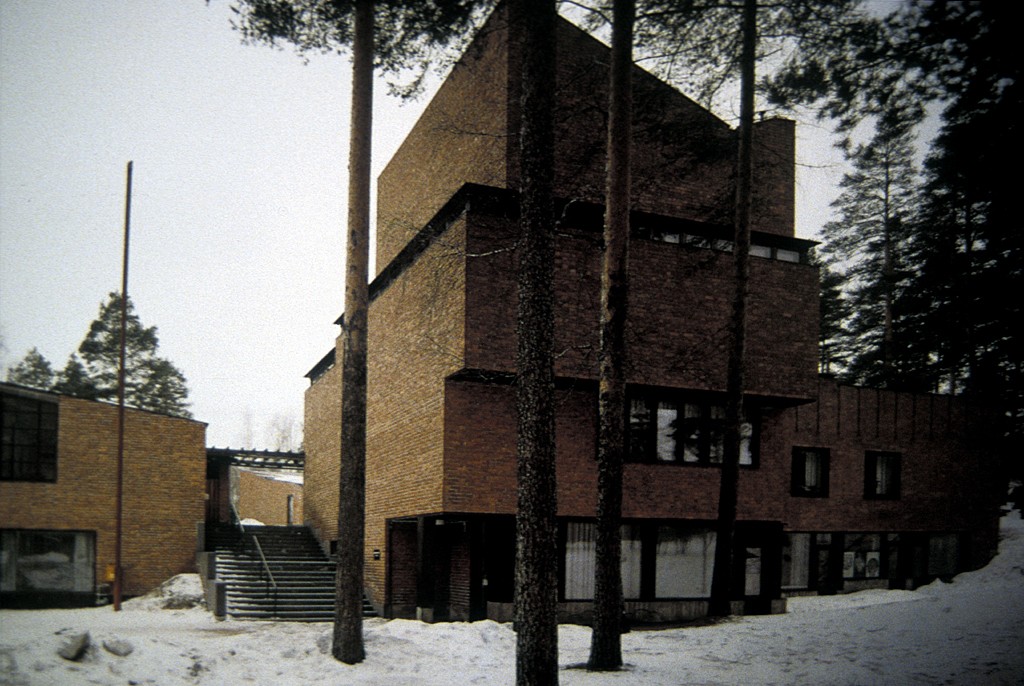 City Theater (Aalto 1964) – (was completed between 1977 and 1982).
The spatial circuits typify within this building Aalto full. No axial routes, no symmetries but a constant screw movement that always leads to the next corner of the room and draws upwards with light. The low intimate reception space flows gradually into the high auditorium foyer. The spaces grow in reception, light and celebration. Nowhere monumentality but a natural routing and a natural accompaniment of entrance to auditorium. The facades are (in Finnish birch trunks inspired) texture of earthenware vertical ridges.

In a city tour some early work: transition between classicism and functionalism (house for railroad workers in 1924, Defence Corps Building 1926).

The Museum of Central Finland (Aalto 1978) with subtle zenithal lit exhibition spaces and the museum Alvar Aalto (1971) are no ultimate masterpieces, but the exhibition presents an impressive overview of the work of Aalto. Search for the humanization of Modernism, an architecture that engages in emotion, atmosphere, intuition. The size and versatility of the work assembled here swims.

The Worker’s Club (Aalto 1924)
First serious job in a classical atmosphere where, however, already a different routing is staged. Search for a language, still laden with Italian reissoeveniers and referring to Asplund. The stage switching between reception and foyer and the plan organization already interesting precursors of later work.

The University of Jyväskylä (Aalto 1951)
A campus as a village in the forest. A setting of birch trees, blank walls in red brick (vertical cut, folded, or lifted by glazed walls from the ground up). Fragmented and interlock spent building clusters around semi-enclosed outdoor areas. Spacious foyer leads through with birch trunks dropped off steps to the zenithal lit auditoriums. Restaurant with dominant wooden rafters breathes the zeitgeist. The rest of the campus resembles a timeless, almost mediterranean village.

Town Hall Säynätsalo (Aalto 1948).
That photography is a meager means is that there is never manages to give architecture back, this again highlights. This complex is world famous, but only spot one experiences the miracle. Bricks cluster between the wispy birch trees. Lifted courtyard framed between a U-shaped low building, topped by the council chamber volume. A fourth wing loose against it. A trapsekwentie leads intimate courtyard on. A brilliant atmosphere change dignified monumentality to intimate seclusion. A sunny L-shaped quasi homey hallway leads to the brightly lit entrance to the council chamber. In the upper room, turn the light intensity to complete. Through gratings into a wall opening, a camera obscura created here. The eye pupils get intense experiences here. The space is almost mystical. The materiality of the red brick facades, walls and floors and wooden joinery envelops the visitor with warmth. The moment (sun, snow) could not be better chosen.

The Sanomat newspaper office (Aalto 1928).
The first true modernist work in his oeuvre has once already a mature work with high Bauhaus content. The color compositions of the painted interior bluish gray to brown, the design of handles, doors, furniture, lamps, breathe perfect 20s atmosphere.

The burial chapel of Brygman (1938).
The lecture on this subject in November, expectations were high. It surpasses visit. The implantation on the hill, the access road there, the anonymous facade … And then suddenly his interior with breathtaking atmosphere of tranquility and excitement. A highly unusual combination of a high volume closed with skimming light behind the altar, and an open cut low volume with generous light and panoramic view over the forest. The subtle angled arrangement of the benches help to get lost along the eye of altar to forest. From mysticism to life. If burial chapel with its symbolism of death and hope, here shows created an emotional and genial place, dedicated to the low light.

Chapel of the Holy Cross of Pitkaenen (1964).
A burial chapel from the 60’s in a very cool landscape planning. A cross, a plain. Horizontal linear low floating concrete surfaces on central columns are the access paths to the low concrete volumes. The architecture is autonomous, totally detached, dignified, serene. The chapel is sparsely lit by sharply cut zenital vents in the eaves, in the side and above the altar. The atmosphere is mystical, contemplative.

The university campus (Aalto 1949-65).
The technology building (1965) with its wedge-shaped ground plan and its concave copper roof, down ending in an amphitheater, is a brilliant climax and focus of a large scenic setting of brick buildings, finished with granite and copper …. Aalto far as the eye …. Buildings which are recognized as natural clusters in the subtle differences in level of the woodland. The stunning interior of the auditoriums we kijrgen see only cheat wise (it’s exam). The Library (1965) is a controlled orchestration of routing, space and light.

Students Chapel (Heiki Siren 1957).
The contrast with that which follows is large. A quiet courtyard with a clock tower in black birch trunks. A dark low entrance hall … and then the chapel. A box with a pitched roof on light beams. The space descends to the altar wall is fully glazed and offers a frontal view of the snowy forest for which a lonely cross is positioned. Humane simplicity. Less is more. More should not be. (Ando has undoubtedly learned much).

The private home of Alvar Alto (1934).
A strikingly modest home actually. Closed to the street. Variegated and generous garden oriented to the south. A combination of orthodox functionalism and a romantic Aalto which creates a human living place for themselves.

The studio of Alvar Aalto (1954)
State a few blocks away. The work areas are still littered with plans and models like the bureau still is in full activity. A foundation is doing here now archiving work. The workspace of Aalto himself is the surprising result of complex spatial experiments: with light shimmering workplace, overlooking a courtyard transformed into a kind of ancient open-air theater.

Finlandia Hall (Alvar Aalto 1971).
The magisterial gabariet this with Carrara held complex dominates the site. The concave carved hollow façades on the spur them are uncommonly elegant. The interior is again manipulated spatially. Interlocking space clusters, drawn by light. Sculpturally modeled hall flanks and ceilings. A landscape of zitvelden. The scale makes it less tangible.

Chiasm museum (Steven Holl 1958).
Holl has created here a very elegant museum in a combination of architectural expression and restraint. Superb planted on the boulevard. Two beams. A lower, straight with stainless steel bar held. (daytime glow). A higher bar, twisted in plan, and in curved cut ends in a glazed cup, flanked by regliet (at night a glow). The wedge-shaped reception room sucks boulevard life. A ramp, in a breathtaking dynamic perspective leads upstairs to a shift of quiet sized (each slightly different) rooms in sequence. Here enters the architecture back into neutrality and draws the fine collection of all the attention.

Five days under the spell of Aalto. His humane modernism, from sites to furniture, shapes, organic and composite spaces, linger mentally. The revelation of the experience of working spot which was known only on paper. Whatever lingers, the low light and its poetic capture – not only in Aalto’s work – but also in that of Brygman, Siren, Pitkaenen, Leiviskä …
Light as a gentle stream, carefully brought, nuanced, screened, reflected, ambient conducted in the premises, or filtered into the landscape by Finnish birch trunks … light, low, scarce … so precious …