Suppose that anyone can become part owner of a piece of architecture. Together we determine the form and content of this space. For example, a common ground created an open and versatile space where anyone can propose.

Spatial Series is a series of debates in the context of 33 YEARS OF SPACE.
How does a space develop and change when it becomes a commons? Suppose everyone can become co-owner of a piece of architecture. Together we determine the form and content of this space. This creates a common ground, an open and polyvalent space where everyone can make proposals. Together with Michel Bauwens, with experts and citizens, we formulate a radical democratic model for building according to the Commonsideology, concrete, tested and researched.

We start with a keynote by Michel Bauwens. Then we get a critical round up of the workshop Radical Democracy that takes place from 4 pm to 6 pm. (You can find more about the workshop: “(external) here”: http: //timelab.org/workshop-radical-democracy) Finally, “(external) a2o architects”: http: //www.a2o-architecten.be / their plan for making them for Timelab, followed by a debate moderated by Jan Boelen about the radical democratic model, about decision-making structures and the role of the government in commonscreation. 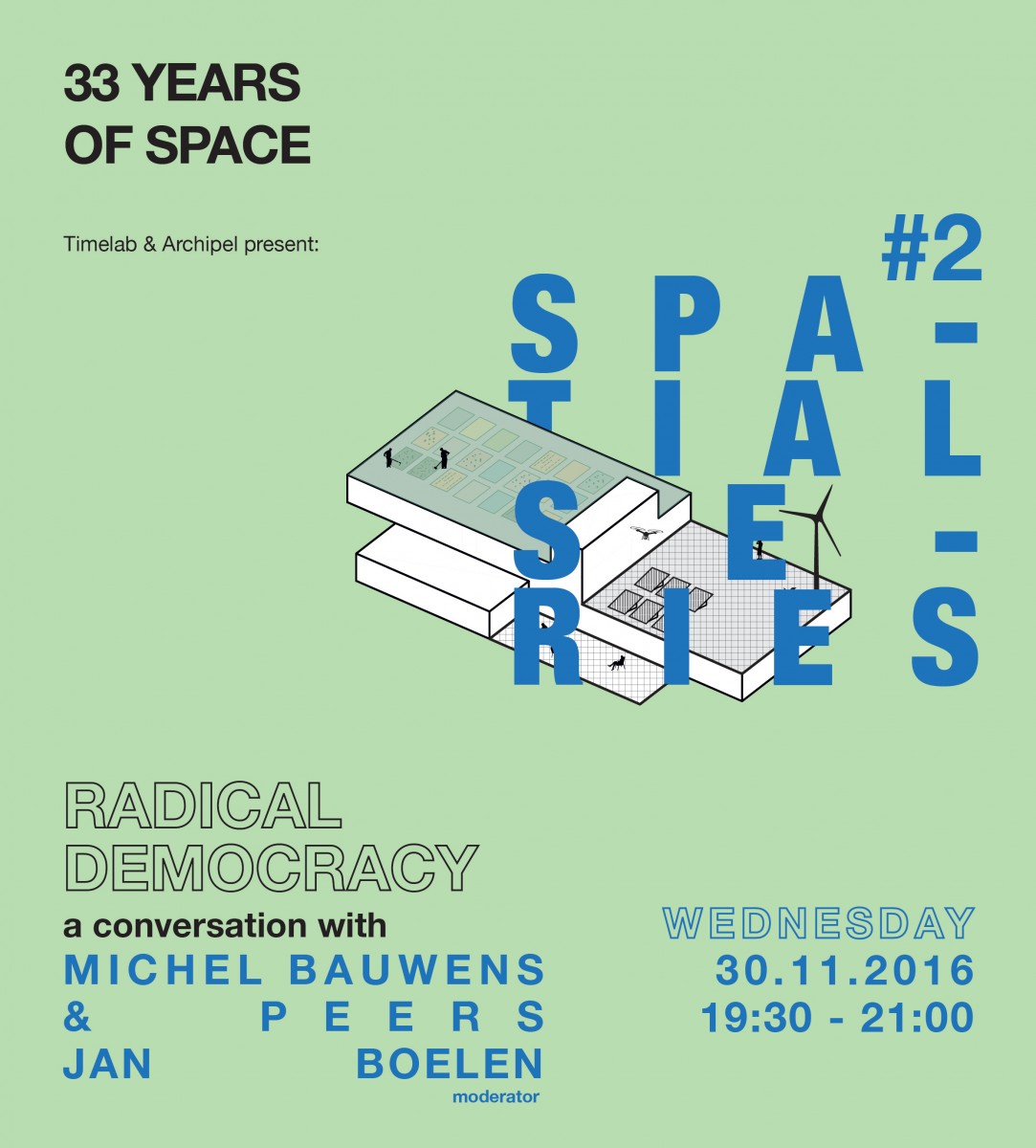 Common ground: differs from public domain and from private domain and is characterized by a shared ownership on the one hand and an open program of space on the other. How are we going to organize this and which infrastructure will subsequently emerge from these processes?

Radical Democracy: Chantal Mouffe and Ernesto Lacau describe that social and political change is only possible through a radical new interpretation of democracy. In addition to freedom and equality, inclusiveness is essential. Can architecture and urban development be included? Can we embrace differences and give them an equal voice in a new radical democratic model?

The cooperative structure with social intent, acting according to the ICA principles: applies different principles than its private or public counterparts. With a democratic decision structure and driven by social and ecological values, a completely different hackable architecture is emerging.

Spatial Series: is a series of debates about architecture as a metaphor for social transformation. About infrastructure as a form of disectonomy of the old standard. About building as an invitation to hackable architecture. The lecture series takes place in a building project called 33 years of space (33yearsofspace.org). The title refers to the duration of the ground lease on a piece of land that the city makes available in Gentbrugge. Here Timelab builds cvba because this open cooperative offers the possibility to actually give the infrastructure in co-ownership of the user and other stakeholders.

33 years of space: is a building protocol for a society on the move. The protocol describes a program that can grow and contract according to relative size.

ABOUT TIMELAB
Timelab is a city lab for new cooperation models. Timelab gives examples of small and big change. These inspire, ask for dialogue and encourage new perspectives. Timelab offers time, space and reflection to artists, designers, makers, scientists and anyone who wants to contribute to a society in motion. Timelab offers an open lab for the development of digital prototypes, co-creation projects, residencies, hands-on open workshops, lectures, debates and a co-working café