The landscape is a battlefield of interests. Everyone projects their own intentions or desires.

The landscape is a battlefield of interests. Everyone projects are own intentions or desires. Tourist. Economist. Ecologist. Egotist. The landscape is a visual mediator. He brings to mediation in scene, which makes him a theater. He is a producer of illusions. He represents the mirror of a tangle of desires. He modeled them and reassures. Promises the fulfillment of desires. But a desire would be no desire as it herself so hard but do not fill. The landscape architect perpetuates the desire. Conjures an illusory balance sheet, if at all, to varying degrees, the fundamental groundless masks or just reveals. The obscurity of the ground. Of the substrate. The enticing system called NATURE. With his stories about lost innocence. Which in turn is a longing zelbedriegend. What was never there. A desire for nothing. 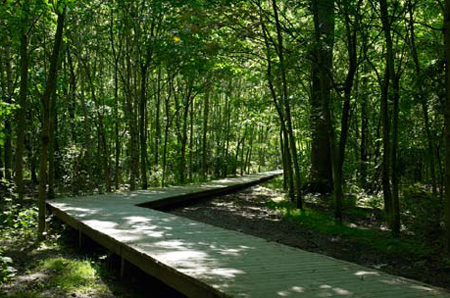 In my work, programs are seen as a playful unbearable lightness. If bewrochting style modules. The reality as a given style. With infinitely interchangeable micro nuances. In their execution rooted in a craftsmanship. That style modules are stretched between an intentional and dissimulatieve module. Whereby the dissimulatieve module is actually the most perverse, and therefore the most theatrical loaded and profound module. It pretends the lost innocence itself, prosperous man bucolic images provide. The man helped in his ever helping self-deception, lies the landscape itself to survive.

Dissimulation which is actually a constant in my work. It requires a sharp craft skill and she is so specific in the sense that they conveyed by acheiropoiesis. The acheiropoiesis is the description of images that look like they were made without human hands. By an external entitetit. A Divine Entity? Nature? Nature as God? Perhaps the landscape architecture is the only discipline that is able to create images, which completely erase the track of the human intention. Whereby the suspected presence – the intervention of an Unknown Other (Power) – bespokend works. Where sometimes a aestheticising paradisiacal scene when projection is claimed. Harmonious; proportional; clear; reassuring. And then another would-be ferocity. Dingy chaotiek. Where nature is sometimes enticed to play spontaneously ‘rechtje-of-the-fittest’.

A contemporary Morituri-to-salutant. The eternal desire for ‘the’ authenticity. The creative of the non-human with its intriguing silence. But in the dissimulatieve landscaping is one glorious theatrical trickery. That is worn ultra-wide in its credibility. And by the landscape snood image-wise staged. The reassurance as a sine qua non. To protect against transgression. That movement which lured the man to haunt the bottomless.