A lecture about The Style. The Style movement in the Netherlands and its influence in Belgium.

(autotranslated)
A new art, a new time consciousness. The Style in Belgium
From Huib Hoste to Henry Van De Velde

On June 24th, 1880 – that is the day of the lecture, a century ago – was born in Utrecht Gerrit Thomas Rietveld. In 1924 Rietveld in Utrecht built the “Schröder House” which is widely regarded as the best, if not the only real example of “architecture of Style.” Rietveld in this way for De Stijl – the movement founded in 1917 by Theo van Doesburg and Piet Mondrian, JJP Old, A.Kok and V. Huszar – acquired a permanent place in the history of modern architecture. This is clear from a review of the historiography of the Modern Movement, Nikolaus Pevsner and Siegfried Giedion to Manfredo Tafuri, French Cesco Dal Co and Kenneth Frampton … The architecture of Style, neoplastic architecture, a “visual architecture”: Rietveld, Oud, and more Jan Wils, Rob van ‘t Hoff, Cornelis van Eesteren.

But the central figure – also with regard to the development of the architecture of the Style – continues Theo Van Doesburg, not only in his writings (“Until a visual architecture” published in De Stijl in 1924) – but also in its pictorial ( The compositions from 1917), and his architectural work (the tile floor in “The Spark”, Noordwijk, from 1918 to his own home in Meudon, 1929). The form, color, space research of Theo Van Doesburg is a substantial contribution to the avant-garde of modern architecture: a thorough, fundamental innovative “work on the (architectural) form” as a specific contribution to a general social modernization.

It says so in the first manifesto of Style in 1918. 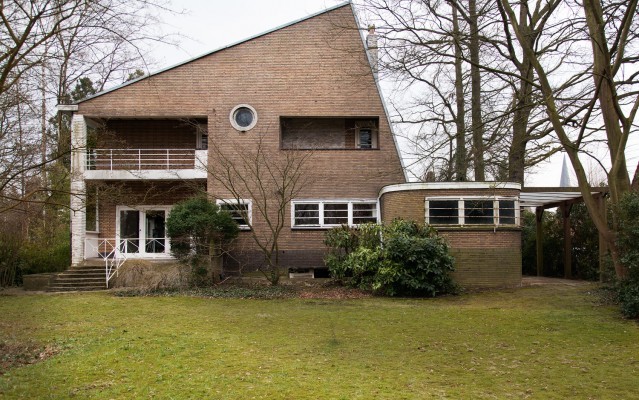 The Style is a resolutely international movement. Belgium also did not escape its influence. Already before the First World War in Belgium, there was a great interest in contemporary Dutch architecture, in particular for the work and writings of HP Berlage. The neutrality of the Netherlands during World War I and the voluntary exile of Belgian artists in the Netherlands would further strengthen this interest and lead to intense contacts and cooperation with De Stijl. In 1915 meets the sculptor George’s Tongeloo of Theo Van Doesburg, in 1916 met architect Huib Hoste Rob Van ‘t Hoff. Hoste published in De Stijl, but refuses to sign the first manifesto and coming finally to a break with Theo Van Doesburg. However, the style remains an important moment in the formation of the “modern” Hoste.

After the war beyond the Dutch borders Style: Theo Van Doesburg holds lectures throughout Europe, including Belgium. The Belgian trade press informs on the style … The impact on young Belgian architects is visible, but it has not yet been systematically studied. For now only traces of De Stijl influence can be appointed. By Huib Hoste course, but also Gaston Eysselinck, Louis Herman De Koninck, Victor Bourgeois, Maxime Brunfaut, Edward Van Steenbergen, Leon Stijnen, Paul Smekens, Renaat Braem … The most relevant question is which of these architects of the young architecture in Belgium themselves – in the challenging track of Theo Van Doesburg and Style – has an equally intense way dealt with this “work to the architectural form.” Why the answer could not be Henry Van De Velde? This year marks 125 years since Henry Van De Velde, on April 3, 1863, was born. The moment Rietveld in Utrecht the “Schröder House” designs and builds and Theo Van Doesburg and Van Eesteren in Paris realizes his first contra-compositions, works Henry Van De Velde, commissioned by Anton and Helene Kröller-Müller, in his most ambitious project: the Grand Museum in Hoenderloo on the “French Mountain” in Park De Hoge Veluwe. It is Henry Van De Velde a difficult reckoning with the historical architectural past, including his past. On his return to Belgium in 1926 he was recognized by the young avant-garde of modern architecture as one of them …