Christian Norberg-Schulz (Oslo) is a monument in architectural theory and the scientific approach to architecture.

The general theoretical and a designer may also have set an architectural problem, always will be the practical need of realizing affect the project. Thus among others the choice of the material, the poetic intentions, of undoubted importance in building and implementing a design.

I touch not just by chance, the problem of the choice of material here. After all, the word material, which is etymologically related to the word mater, refers to the human need for security, tenderness and spatial shelter which is contained in the mother-archytype. Human beings will have to face in a direct manner with which seemingly indefinable, those things that apparently belong to the world of dreamer, s poets and philosophers. And yet, yet these things at one stage were very clearly defined and they suddenly realized that they are human with the essence of us have to do. The awareness of these seemingly elusive qualities brings us to a very special view of things. Being studied in phenomenology, a discipline do with her Husserl was introduced into Western thought. “We must return to the things themselves!” he says, and it is this statement that later inspiring will work on understanding of architecture as a phenomenon. 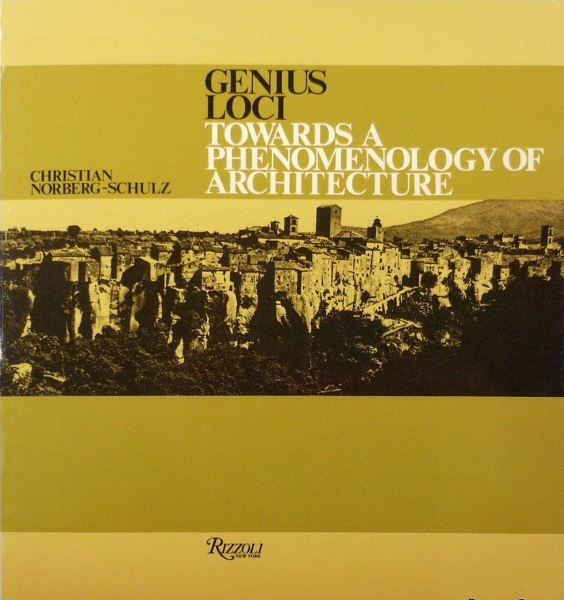 Christian Norberg-Schulz did not just happen, in my theoretical masterpiece, Genius Loci the subtitle: Towards a Phenomenology of Architecture ‘. This work represents a pivotal moment in the development of his theoretical work. He started in ‘Intentions in Architecture (1965) propose a language of which the methodology is analyzed to design. But he thus went on, he developed a theory of architecture which are considered immediately perceptible world of forms and techniques only as a part of the architectural experience.

His second theoretical work ‘Existence Space and Architecture’ (1971) gives us the understanding that it seemingly indefinable, but necessary-added, is described. He speaks about the existential space and we see for the first time the works of Bachelard, Bollnow, Merleau-Ponty and Heidegger were especially inspiring when consideration is given to architectural spaces. The Heidegger will continue to inspire the further work of Norberg-Schulz, as it has a strong presence in his next work “Genius Loci” (1979).

The identity of the slab, looking at the landscape of the mind, are indeed words that can be found almost literally reflected in Heidegger ‘Bauen, Wohnen und Thinking. “. Yet Norberg-Schulz brings some concepts back together that are the necessary development of an architectural language is essential. In his fascinating essay “Kahn, Heidegger and the Language of Architecture ‘(1979) he organizes the structures of topology, typology and morphology. In his recent work “The Concept of Dwelling (1985), Roots of Modern Architecture” (1988) and in his introductions to the work of Botta (1984) and Boffil (1985) each time he repeats the importance of recognizing the qualities in the countryside, in the crush where architecture is created.

The focus on the theoretical development tests norberg-Schulz prmanent the history of architecture. His masterpiece in this area is the publication of ‘Meaning in Western Architecture “(1974) preceded by its historically significant work” Kilian Ignaz Dientzenhofer (1968), “Baroque Architecture” (1971) and Late Baroque Architecture “(1971) . Of undeniable importance in the work of Norberg-Schulz is his attention to every form of architecture manifests. He has made a special contribution to the opening of folk architecture for the common academic framework within which architecture is discussed. “Stav og Laft ‘(1969) and his introduction of” Wooden Houses in Europe (1979) provide a clear understanding of the importance that it has in the broader look at the phenomenon of architecture. This only confirms what Husserl offered him “to the things themselves, we must return!” it is his faith in an authentic experience of architecture.

Raf The Saeger (1951)
⁃ architect 1977 Sint-Lucas Brussels
⁃ doctor engineer, 1985, University of Oslo
⁃ 1976-1977: seminars at the Norwegian Institute i Roma conducted by Chr. Norberg-Schulz and H.P.L’Orange
⁃ 1978-1985: staatsstipendiaat, assistant and later assistant at the University of Oslo led by Norberg-Schulz
⁃ since 1978 connected as an assistant at the institutes of architecture Sint-Lucas Brussels and Ghent
⁃ since 1985 president of the American Vernacular Group with headquarters Oxford University
⁃ organization of symposia:
⁃ 1987 Wooden architecture in China, Japan, Finland and Russia with Werner Blaser (Basel)
⁃ 1988: Wooden churches in Moranië, Bohemia, Slovakia
⁃ 1988: The architectural personality of the British Isles with P. Smith (Wales)
⁃ 1990: within the framework of the Flanders Festival: The Nordic Lights: Norwegian contemporary architecture (as of September 1990 in Brussels).