The buildings of Eugeen Liebaut seem at first sight completely autonomous objects. Their abstract geometric design ties in with the avant-garde of the 20s, especially in the purism of Le Corbusier and the Suprematism of Malevich. They express themselves in a clear idiom that strongly contrasts with the farmhouses and other platitudes of the plots in which one finds them.

(autotranslated)
The buildings of Eugeen Liebaut seem at first sight completely autonomous objects. Their abstract geometric design ties in with the avant-garde of the 20s, especially in the purism of Le Corbusier and the Suprematism of Malevich. They express themselves in a clear idiom that strongly contrasts with the farmhouses and other platitudes of divisions in which one finds them.
Paul Vermeulen characterizing them as “boulders” as “washed, rubbed smooth by erosion boulders in their inner hide a precious secret”.

Nevertheless, if it were misleading Libauts buildings as paint off completely autonomous. In all their autonomous logic, their pure geometry, they have specific forms tailored to the situation in which they came about and keep them in mind way related to their environment. The apple which assumes lies not least in the fact that they are in all their witty abstraction also associations of an entirely different, takes the opposite nature in them at all, not only memories of bridges and boats coming from the industrial past of Aalst, the birthplace of the architect, but also references to organic coherence, to physicality. 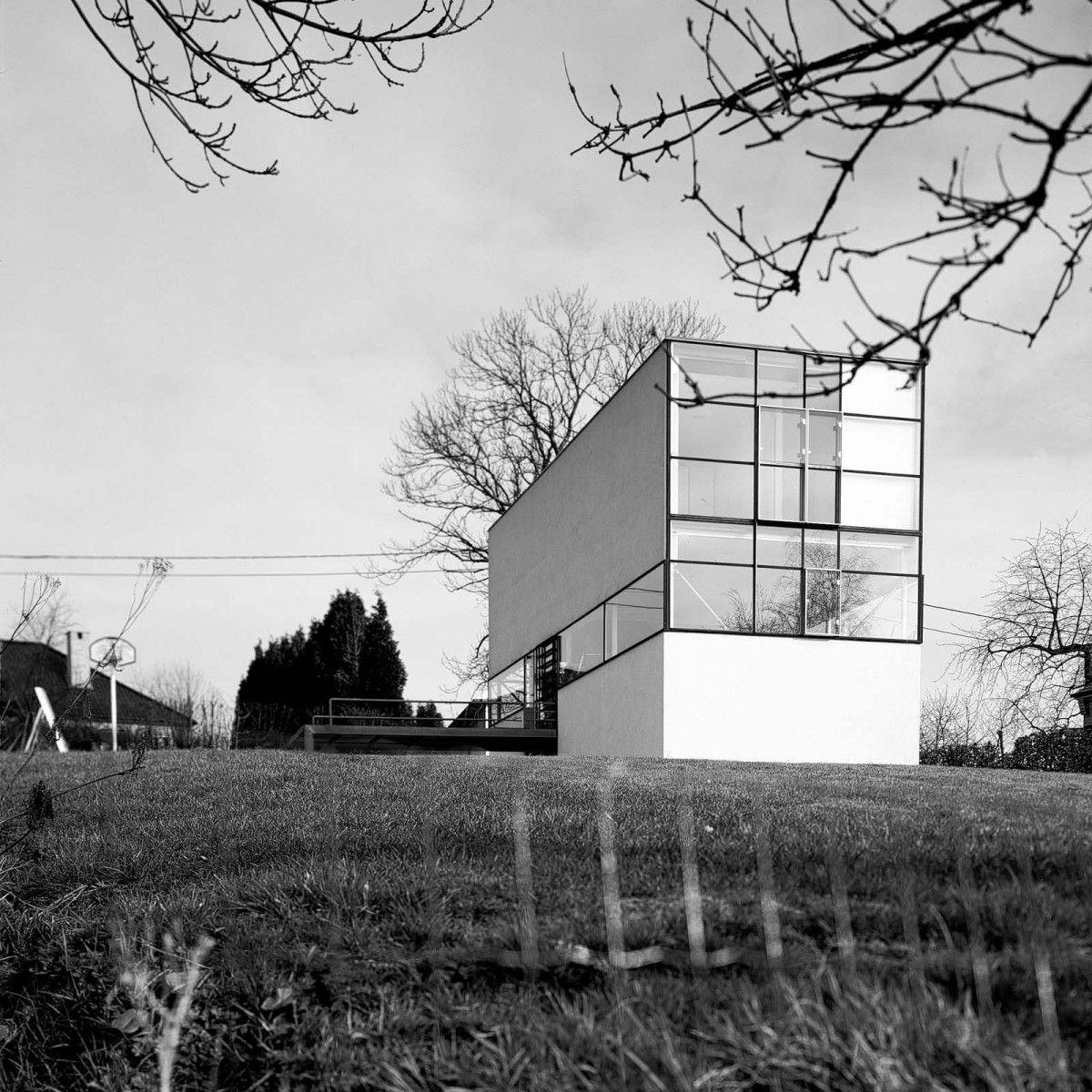 Own house
The house which Liebaut builded for himself and his family in a quiet village on the edge of the Flemish Ardennes appears at first approach as a pure neo-purist act, a rigorous geometric white prism acutely emerging in the green between the traditional rural houses. It is a building which offers a striking realization of Le Corbusier’s conception of architecture as “un signe merveilleux the clarté au milieu du spectacle de la nature apparente confus” an expression of “la volonté géométrique” a “geste d’optimism.”

On closer inspection, however, one can notice that many a deviation from the purist orthodoxy. The volume rises not on “pilotis”, it does not float but is partially sunk into the ground. The white prism is not subject imposing on with respect to the neighboring houses. Situated on a sloping terrain, hidden behind a hedge and presented it with its eaves not much higher than the bottom of the surrounding ezadeldaken. And in spite of the large windows in the front façade it is not a Citrohan type here. The living space which occupies the entire first floor – an elongated rectangle of 14.70 at 4,30m – has a completely open floor plan where the back are set up the sanitary core with kitchen and staircase; these are not, as in previous Liebauts houses, conceived as “object types” but as a clustering of neutral volumes where space flows freely around it. The space expands upward into a void not only unfolds in all its sides horizontally through continuous windows offering panoramic on the environment.

The sight and the light to be intensified at the ends of the prism where the “fenêtres and longueur” of the side walls merge into a glazed wall that reaches to the ceiling: on the east side to the morning to march into the kitchen, on the west side to t open a wider view of the pristine valley of the Ransbeek stretching to the horizon. Despite not exactly generous width (4,30m), this is an interior that evokes a strong sense of space. The space flows through the revolving glass windows as it were continuously through the interior. The living is continually and comprehensively involved in the surrounding nature. The family lives in the middle of the countryside, in close contact with the changing rhythms of climate and vegetation. Quite contrary to this openness is the obvious introversion of the workshop on the ground floor conceived as a meditation room, lit only via the entrance door and a glass plate in the ceiling.
Also the structure of the house is not exactly Corbusian. In contrast to the impression created by it, it is not made of concrete. The basement is a plastered brick construction and the superstructure consists of a steel skeleton filled with wood floors and walls. The outside walls are finished with plastered insulation. This construction was partly motivated by the need, given the local low bearing capacity soil, build as light as possible. The light construction is reinforced by a steel coupling oblique wind braces in each of the two large windows at the ends. This judicious placed tectonic elements in no way affect the space but to associate her with industrial frame construction and contribute to its dynamics.