Romantic, passionate, sensual, tragic and cruel, that are the Mexicans and that is their history. And colorful. The deep blue of Frida Kahlo. The cutting red Diego Rivera and Juan O’Gorman. Dazzling Gold Matthias Goeritz. The smooth white Felix Candela. In the sun-drenched ocher Ricardo Legoretta. The mysterious deep pink Luis Barragan. 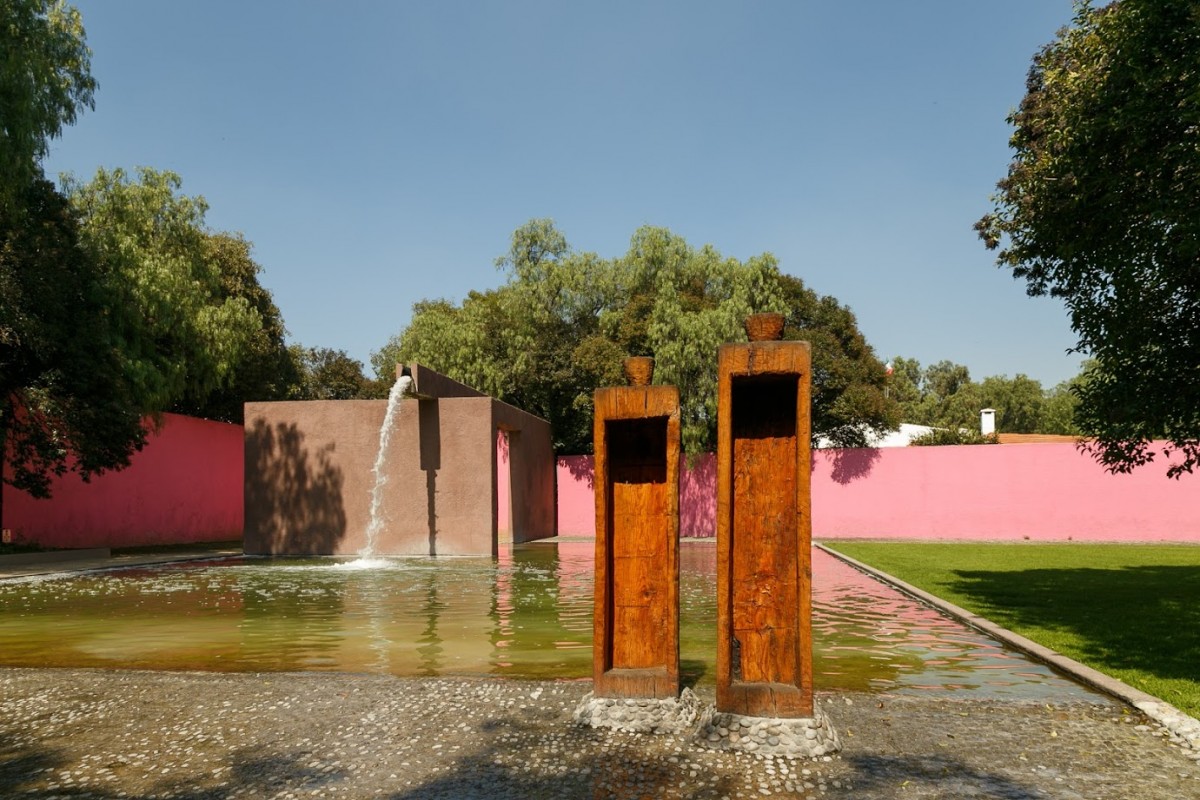 Mexico City is sinking. Six centimetres a year. Slowly. As if it were ashamed of doing so. Of course, it was a bad idea to establish a city on a small island in the middle of a lake. It was an even worse idea to dry up the Texcoco lake and all of its rivers in order to ram its foundations in the mud. Blame it on an eagle that according to the founding tale wanted to eat a snake.

Nevertheless, it is a city that keeps on moving. Even though it’s unclear in which direction. This is part of its contradictory nature: a city obsessed with its past, but open to anything new. A dynamic and efficient bulwark that is at the same time both chaotic and corrupt. With an architecture that again and again has been defined by its specific relation between mass and void, between monolithic monumentality and open space.

Throughout the twentieth century, modern Mexican architecture was skilful enough to translate into a contemporary architecture language the spatial and monumental conceptions of the past such as the remnants of Teotihuacán or the Zócalo – the third largest main square in the world, surrounded by palaces and religious buildings. The campus of the National Autonomous University of Mexico (UNAM), inaugurated in 1952, is without any doubt the most ambitious modernistic example hereof. For each campus building, Mario Pani and Enrique del Moral brought together a prestigious architect of its time, a starting architect and an architecture student. The language is truly modern –free plans, buildings on pilotis, huge windows– but two special characteristics made it different from generic modern architecture: the reinterpretation of Meso-American platforms in the grand central esplanades; and the (mostly three-dimensional) interventions of numerous mural painters on the facades of the main buildings, including Juan O’Gorman, David Alfaro Siqueiros, Diego Rivera and Francisco Eppens.

Beyond political discourse, monumentality in Mexico City has been approached in a more abstract way by enlightened eminents such as Luis Barragán. The Satélite Towers, five huge coloured concrete prisms in the middle of the main highway were designed from the perspective of drivers in moving cars – the dream of any Italian futurist. Here the equation is inverted: the mass is the static centre, the void is the unstable perimeter as perpetuum mobile. Not only in this iconic installation, but equally in numerous poetic projects by Barragán, the colours of the Aztec murals play the role of the abstract protagonist. And all this beneath an extensive blue sky, el cielo azul.

But the endless sky and the sweet sun can also be vivacious and sharp… In Bajo el sol jaguar1 (1982), Italo Calvino reports in his characteristic dry laguage about a trip to Mexico with his spouse Olivia. He narrates how both of them surrender to food – just as almost all Mexicans. Beyond the distant language an emotional intensity is hidden. At first sight, the couple with relationship problems uses the sometimes mouth searing food as a substitute for sex. But through these primary obsessions, Calvino also focuses on cannibalism. Their ‘hunger’ for ‘devouring’ intercourse also symbolises the bloody history of the country. Not only the indigenous sacrificial rituals or colonial mass massacres, but also the contemporary cruelty cannot escape from this

Tlatelolco Square, the so-called Three Cultures Square (with pre-Hispanic ruins, a colonial church and a modernistic cultural center), is such a tragic place. Not only because of the 1968 killing of students here. It happens that sometimes Mexico City doesn’t sink slowly; it sinks with conviction. Shamelessly. That happened in 1985, when an earthquake devastated the city. Among the modernistic buildings that collapsed were residential high rise buildings of the Nonoalco-Tlatelolco Housing Unit, inaugurated in 1964. Of the multifamily project that comprised 12,000 apartments in 102 buildings, one of the buildings collapsed and eleven more had to be demolished. Since then, the place has become a crucial point in the urban history of the metropolis, and the date, 1985, signifies the end of faith in the modern utopia.

But in Mexico City nothing is static. Besides the fact that 63 per cent of its houses are self-built (shanty towns or autoconstrucción), new skyscrapers and luxery residences sprout up. Controversial public buildings such as the Soumaya Museum, born as a spectacular anachronism, stand in fierce contrast with elegant and careful masterpieces such as the projects by Alberto Kalach. Sensitive urban interventions have appeared, public transport is slowly becoming organised and the construction of a new airport designed by Norman Foster and Fernando Romero (FR.EE) is about to begin.

In fact, Mexico City is not sinking. The ciudad floats. Like a cork: no matter how hard you push her down in the water, she keeps popping back up to the surface. She floats.

Text inspired by the article ‘A floating coark’ by Juan Carlos Cano in ‘Tank Magazine’, with the exception of the passage on Italo Calvino. 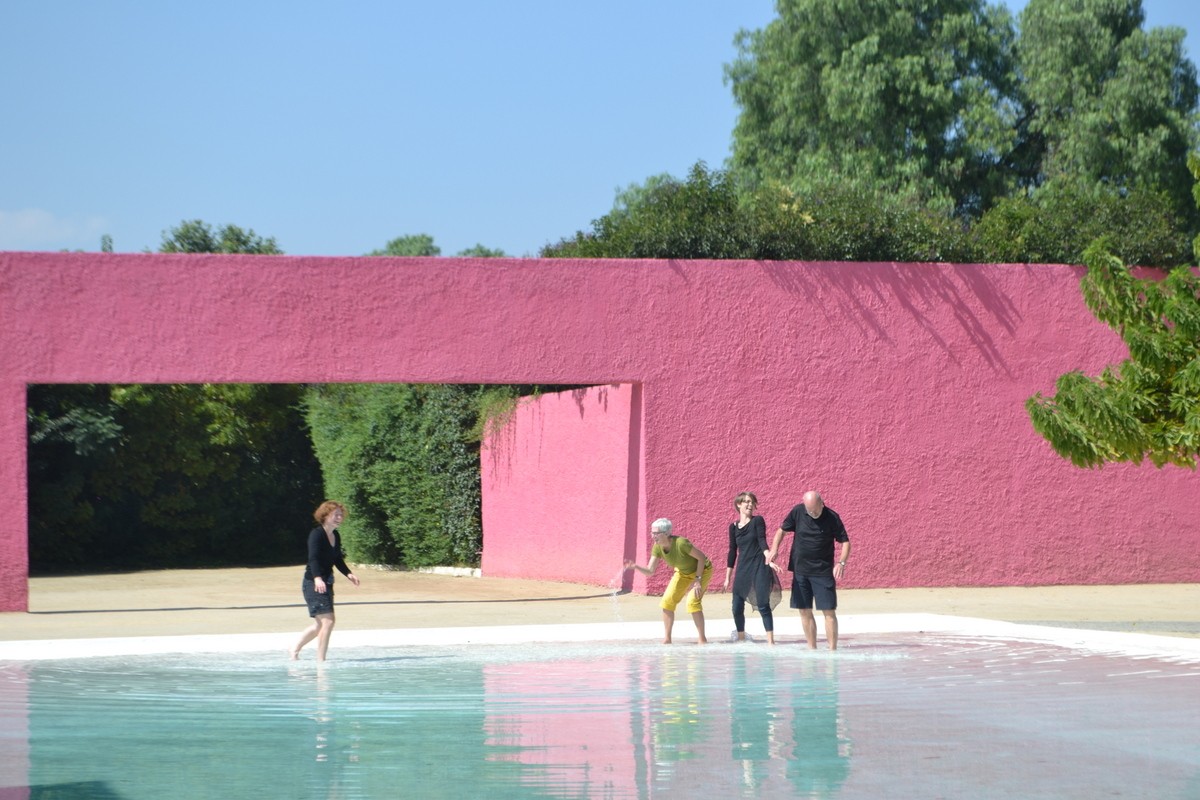 Weeping guitars singing in your head. You feel the Mexican passion and pain. The song, known to us in the version of Luz Casal3, in 1943 originated from the heart and the blood of the Mexican Agustin Lara.

Romantic, passionate, sensual, tragic and cruel that the Mexicans and their history. And colorful. The overwhelming color palette is breathtaking and peppered the cultural experience of this trip.

The Salk Institute by Louis Kahn in San Diego California was the beginning of this Mexico Travel. Although Salk is shaped by little color, the influence of Barragan is on the majestic courtyard, overlooking the sea, continue to resonate.

“In Mexico, I met an architect Luis Barragan … an absolutely extraordinary personality. Through its gardens flowing a small source of running water, which is so far-reaching that lose out against all landscaped scenery in the world.”
Louis Kahn

Luis Barragan was also a revelation for us. His poetic imagination creates gardens, houses and fountains of breathtaking beauty: metaphysical landscapes for meditation and serenity. The discovery of his character and way of life, his deep faith and his inner identity struggle was a revelation.

But Mexico is much more than Barragan. We left on prospecting with a list of 228 projects. Ultimately keep fifty sites and projects in our sparkling outline shapes of multicolored soul of the Mexican architecture and its history. A varied selection that will surprise us and hopefully you wonderfully passionate and emotional. A typical Archipelago program.

“… Mexico is not a curiosity to visit, but a life to be lived.”5
Henri Cartier-Bresson

“There is no comparable excitement in the world with the excitement of realizing that you are on your way to Mexico.”6
Philip Guedalla

3 The song we know from the film off Pedro Almodovar: “Tacones Lejanos”(High Heels) (1993).

4 “My house is my refuge, a place of emotional architecture.”

5 Henri Cartier-Bresson went at the age of 26 on ethnographic expedition to Mexico. That failed, but he decided to stay a while and photograph.

MEXICO: Saturday, October 29th to Sunday, November 13th, 2016
The basic travel Yucatan Mexico without leaving Saturday, October 29th, 2016 from Brussels and arrive the same evening in Mexico.Van Sunday, October 30th to Friday, November 11th we travel in and around Mexico City and swarm to Cuernavaca and Teotihuacan. By bus, metro or on foot, we explore the many aspects of the urban, architectural and artistic search for a new and better world. This trip gives a colorful overview of what lived in Mexico since the beginning of our era until today. The basic travel Mexico concludes with the return flight on Saturday 12/11, homecoming Sunday, 13.11.

MEXICO+YUCATAN: Saturday, October 29th to Friday, November 18th, 2016
We travel during the expansion, five days through the Yucatan Peninsula. Saturday, November 12th we fly from Mexico City to Merida and swarms from there through a wonderful variety of nature and culture.
Yucatan is located in the southeast of the country. It is a popular tourist region where beaches, nature and Mayan culture are the main attractions of the area. The peninsula has a pleasant climate, even in winter. Most tourists go to the Yucatan for beach holidays on the east coast (Cancun, Playa del Carmen, etc …). We let it lie on the left and continue to the west and visit some exceptional Mayan sites, combined with beautiful colonial cities, monasteries and churches from the time of the Spanish domination.
Highlights: Chichen Itza, Uxmal, Campeche, Valladolid and the yellow town of Izamal. We also take part of ‘La Ruta Puuc. Puuc is a region in Yucatan which has especially flourished in the classic Maya period and has developed an exceptional and impressive architectural style. According to the German ethnologist and archaeologist Berthold Riese Yucatan has over four hundred Maya sites.
Not all sites have tourist status of Chichen Itza and are therefore often visit without annoying crowds. However, some locations are equally as nice if not nicer. The visit is usually a quiet and relaxing respite.
Mexico + Yucatan trip concludes with the return flight on Thursday 17/11, homecoming Friday, 18.11.