Ostend flourished under the first Belgian kings and during the Belle Epoque it became one of Europe’s most cosmopolitan and fashionable spa towns. After the Second World War, Ostend illustrated its progressive, bustling image by radically opting for modern architecture in its reconstruction. Which traces remain recognizable? The route along modernist projects in Ostend is also a call for the protection of modernist buildings. 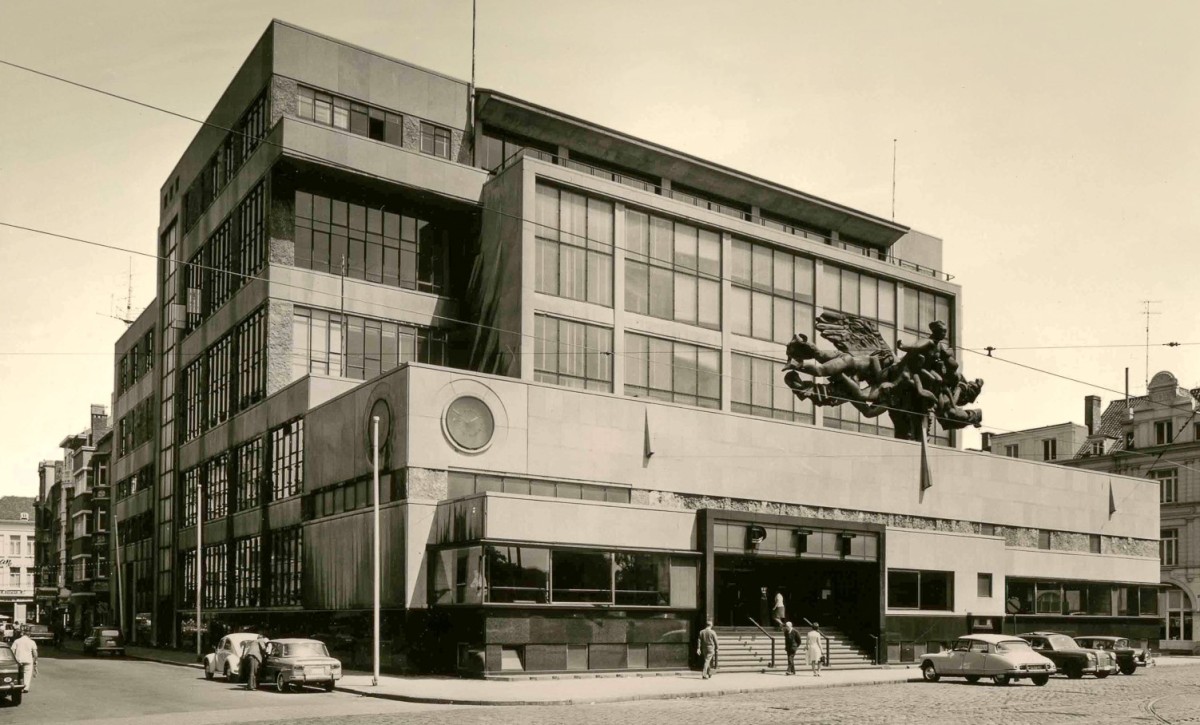 
A unique bicycle tour in and around Ostend takes us from the interbellum to post-war architecture… from the 1930s to the 1970s… It takes us past a few paradigm shifts from art deco to modernism to brutalism. In the process, we also draw attention to buildings, some of which will unfortunately be demolished in the near future, despite their status as architectural heritage.

A selection of the many projects: 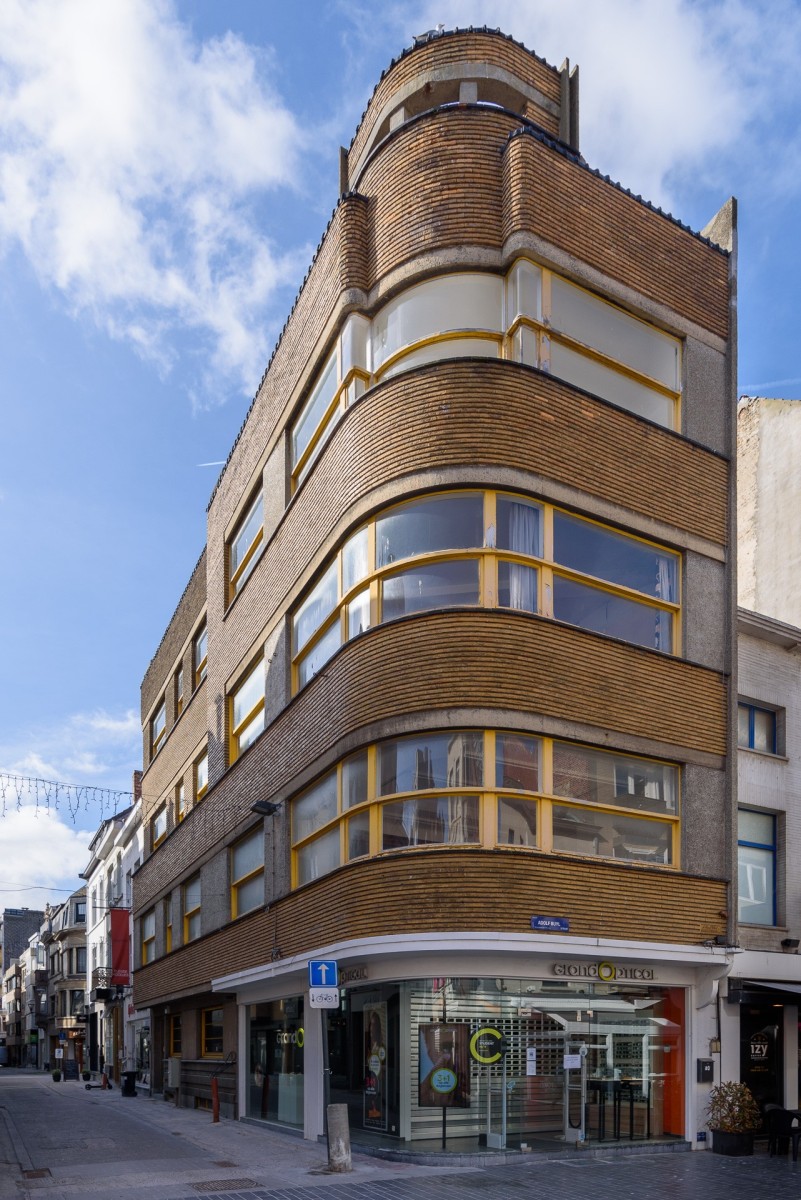 Architect Smis mixed various influences in this private house with a striking art deco facade. The two carved stone capitals flanking the entrance are in keeping with the expressionist Amsterdam School. The warm interior in which the marble and parquet floors and the tropical wood panelling determine the atmosphere, also incorporates typically Flemish elements in the fireplace and the stained-glass windows.
(Protected as a monument)

The apartment building with storefront was a first major commission for the young architect. The reinforced concrete skeleton construction allowed the corner to be free of any supports, which caused quite a stir at the time. The use of materials, from the rounded corner shape, the eaves, the sills, the curved glass to the graceful window division with horizontal accents was in keeping with the New Objectivity.
(Protected as a monument) 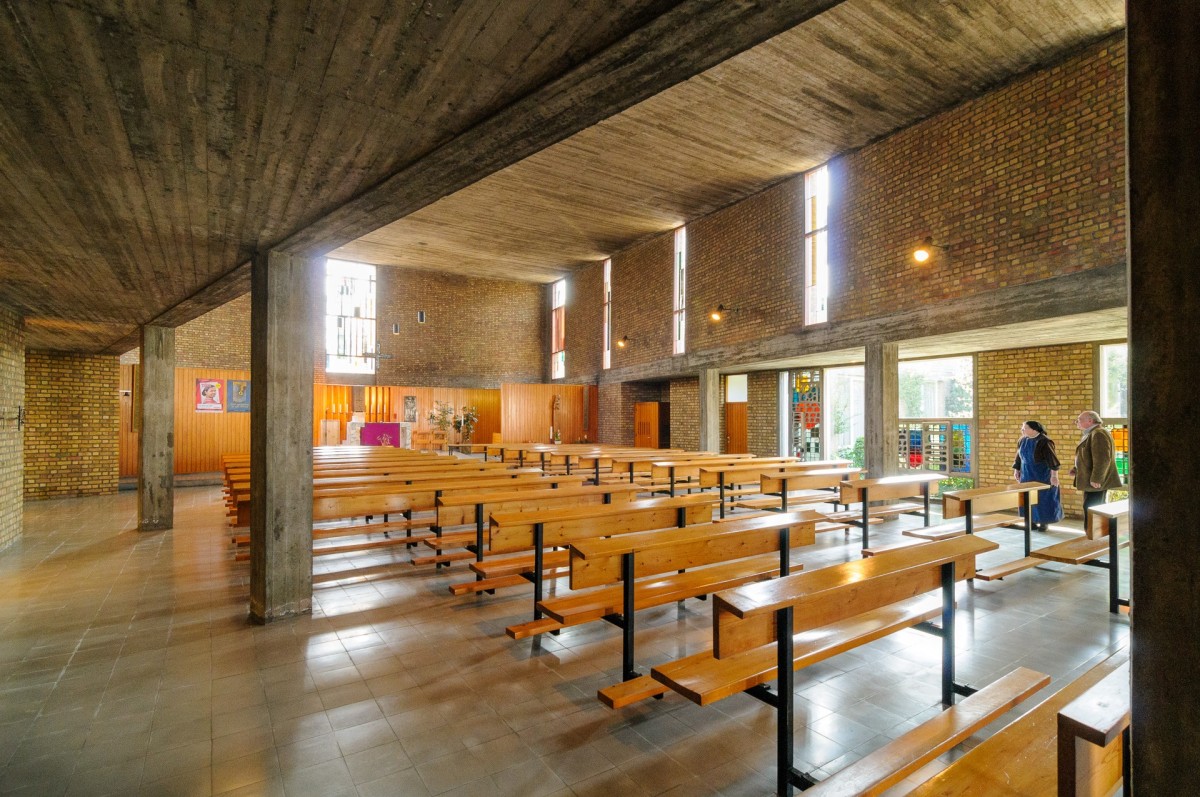 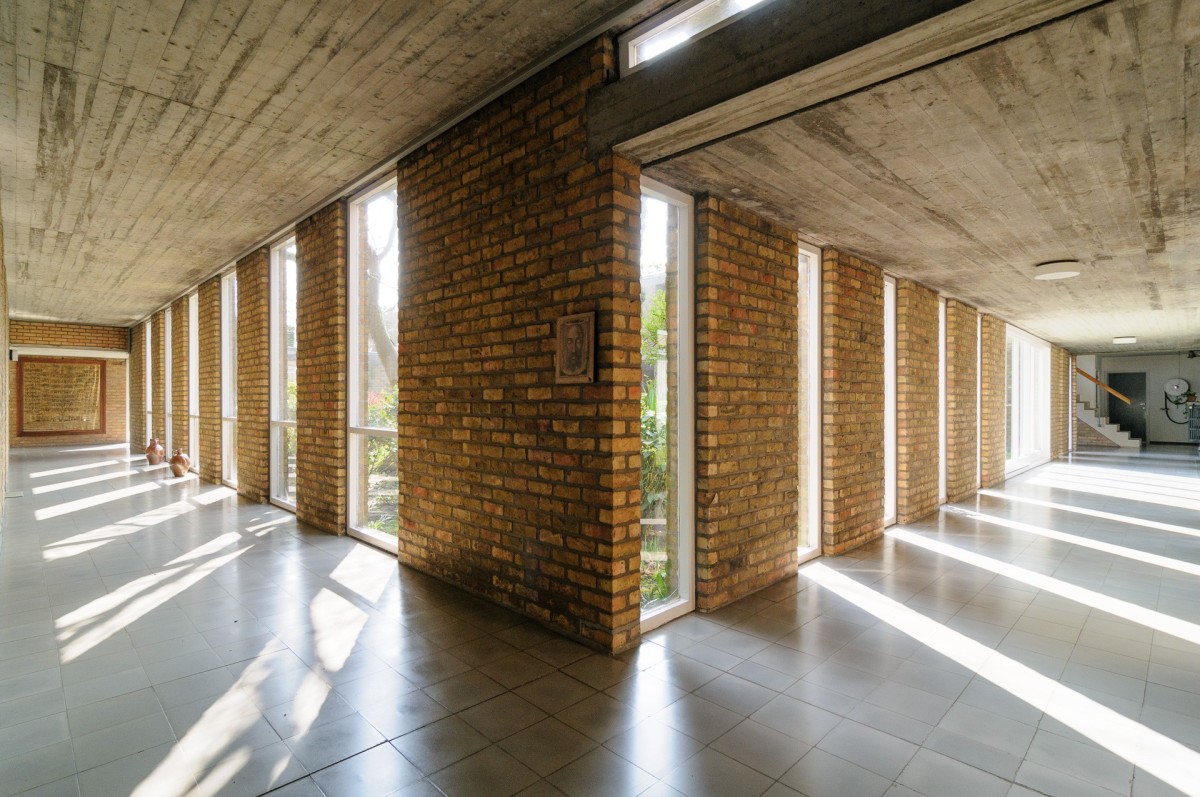 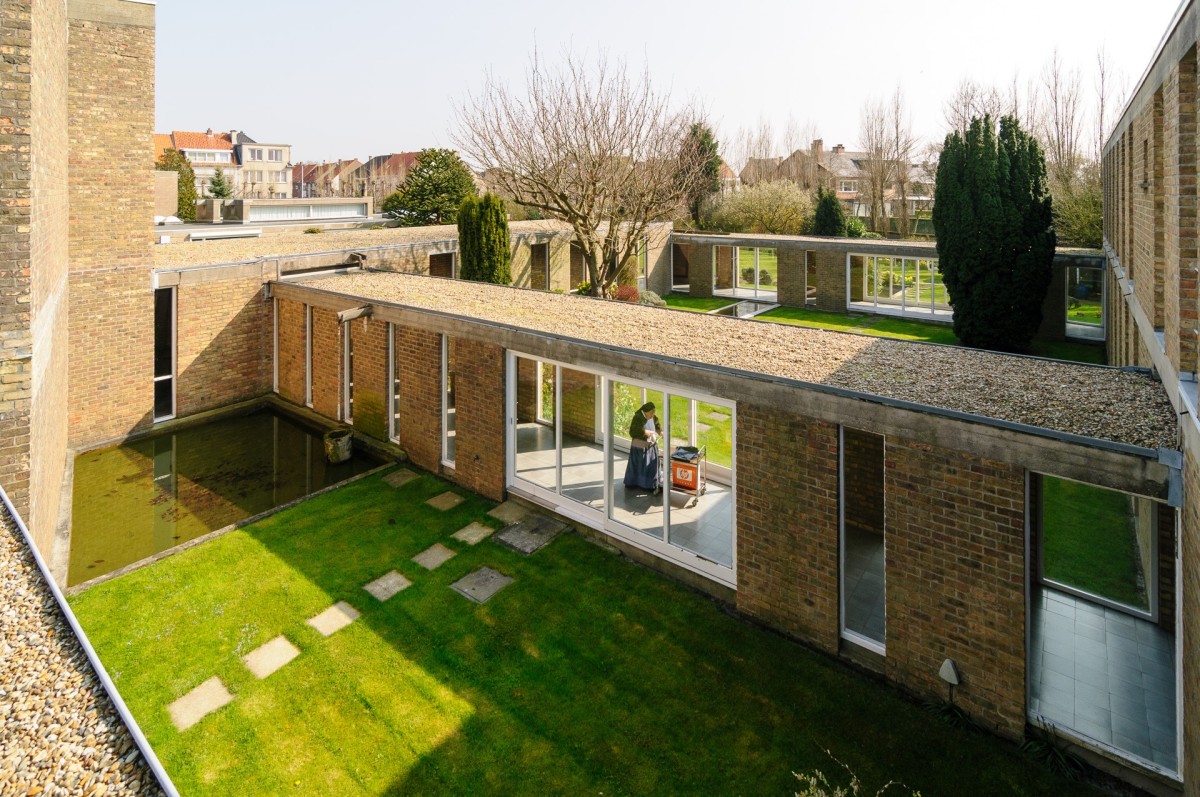 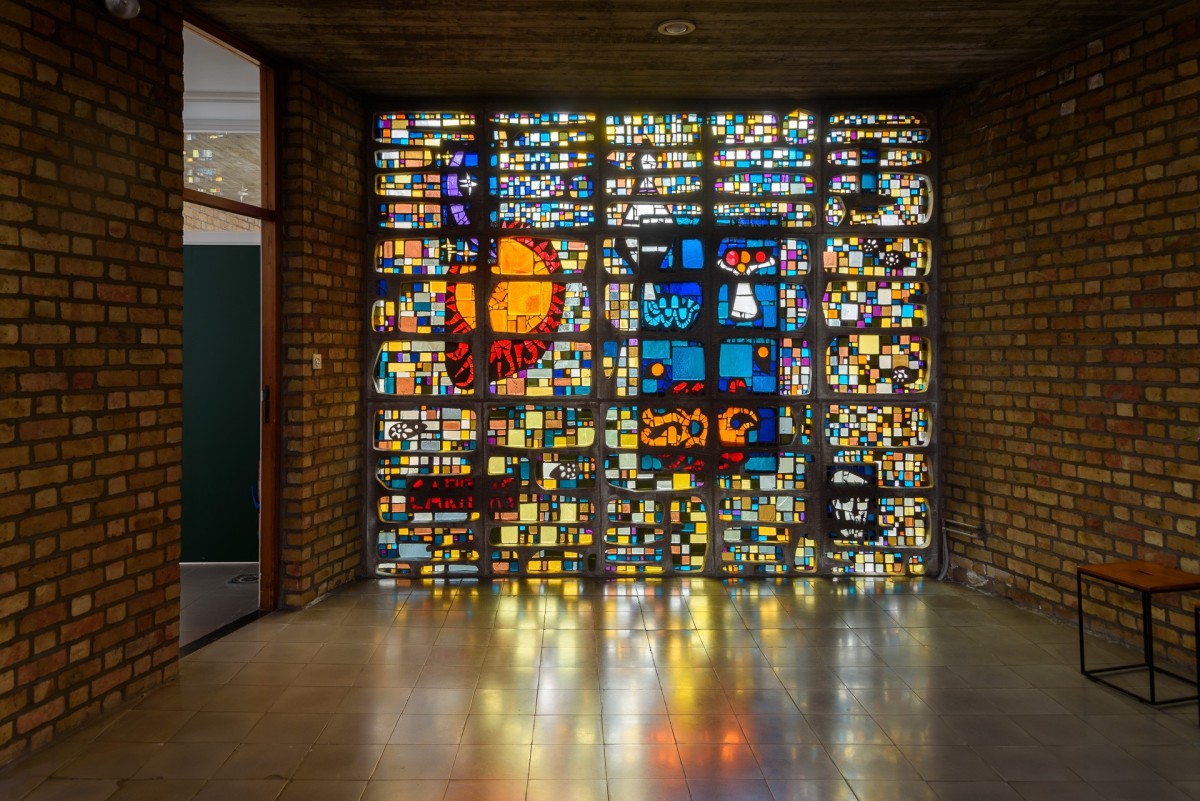 In the then still unspoilt polders on the outskirts of Ostend, a strange brick ship arose in 1958. In the Clarisse convent, Felix designed an enclave in a reduced architectural language that merged an ascetic modernist simplicity with the Franciscan way of life of the nuns. In the convent, he had found his architectural language, which escaped some of the clichés of modernism and reduced architecture to timeless essence and simplicity in a material use of exposed concrete and bricks. The chapel features ironwork by Roger Bonduel and stained glass and glass-in-concrete by Michel Martens. When it was inaugurated in 1959, the architectural press, both national and international, was unanimous in its praise: Architecture 59 – June 1959 “Sans pretention aucune”… Streven – November 1959 “An incredible ordinariness”… Art d’Eglise – 1959 “La vertu d’hospitalité”… Architectural Design – August 1960 “Without any pretentions”… Architecture d’aujourdhui 96 – June 1961 “une grande simplicité”… La Rocca – November 1961 “Spitito di simplicita”.
In 1965 it was extended with a second phase and humbly disappeared behind trees, taken in by a rapidly growing residential area.
(Protected as a monument) 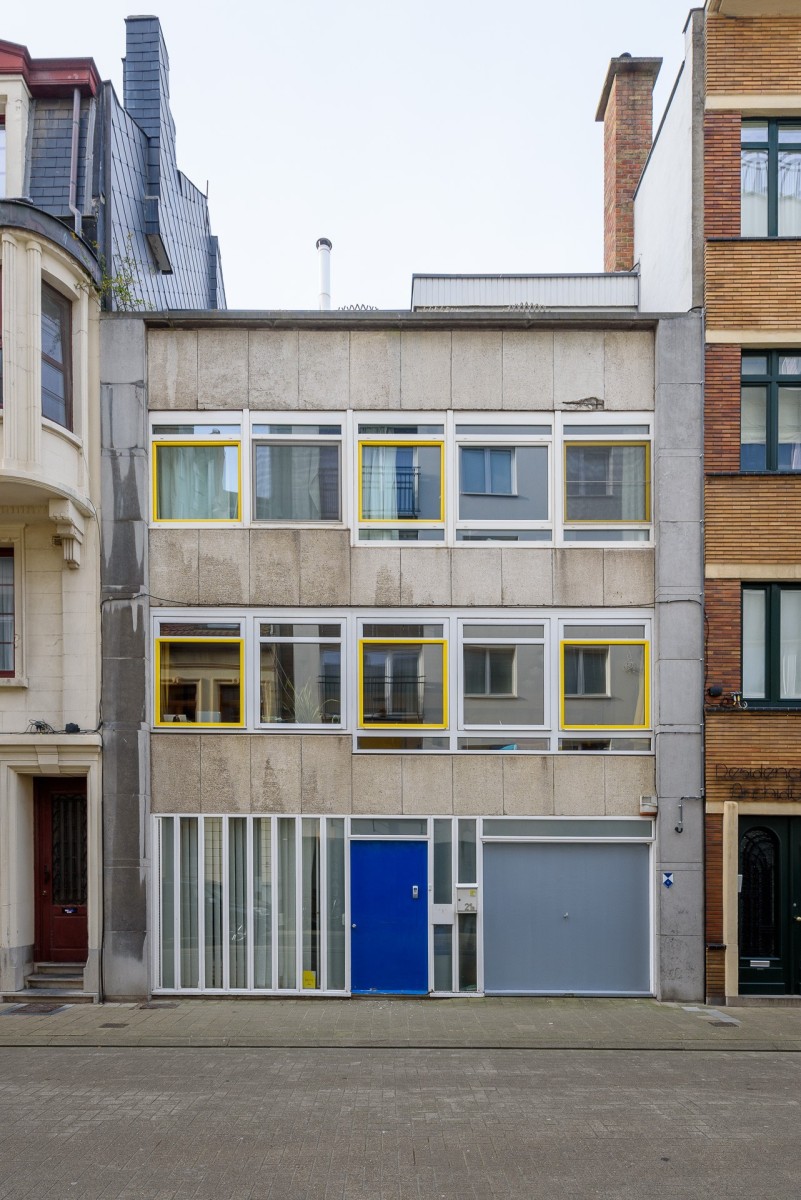 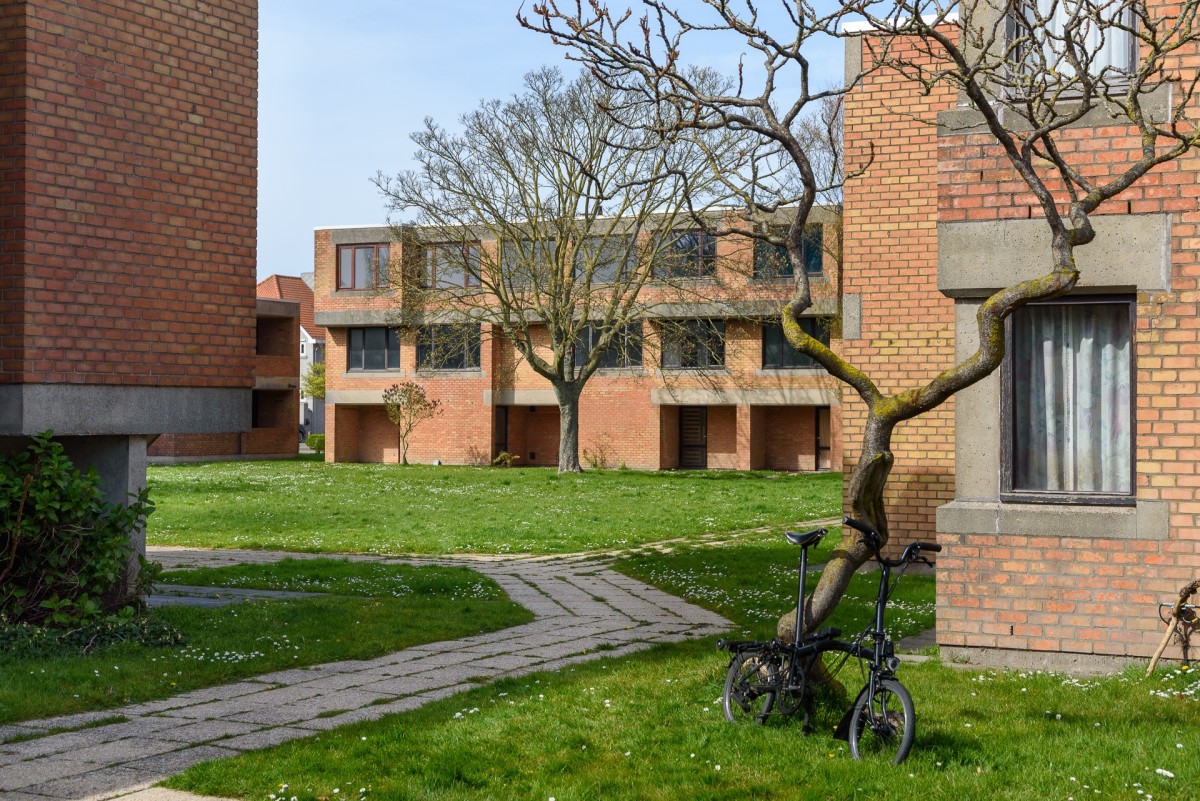 Tanghe recently graduated and designed this apartment building with a smooth façade in a functionalist, modernist approach and graphic refinement. For the striking polychromy in grey, blue, yellow and white, he collaborated with the artist Michel Martens. After its completion, the building was published in La Maison as a pioneering project.
(Protected as a monument)

The seventh phase of the social housing estates in Oostend’s Westerkwartier was realised by the Planning Group from Bruges. The concept, which was inspired by the English “New Brutalism”, consisted of arranging staggered groups of dwellings around a communal garden. In the design of brick and concrete, the sculptural staircases stand out as carriers of an expressive language of forms. The neighbourhood underwent limited renovation, and a large part of it was demolished.
(Architectural heritage) 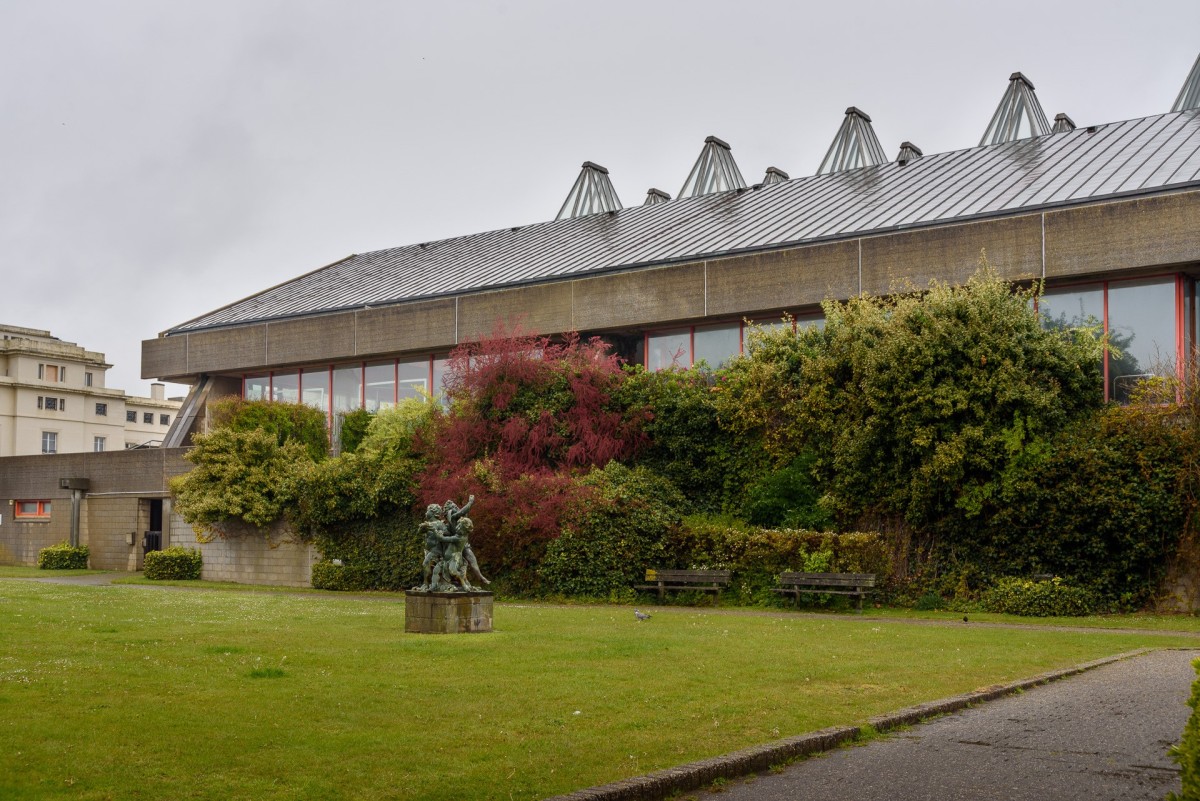 The complex consists of a monumental roof construction on eight pillars with all-round glazing and generous zenithal light for the swimming pool and a transverse wing for the children’s pool, cafeteria and terraces. It was raised two metres after an invitation to tender in 1971, when neighbour King Baudouin left his villa and his privacy requirements were removed, so that ramps, steps and planters surround the complex. After forty years of intensive use as a swimming pool and after poor maintenance and disfigurement, the city council decided to demolish the complex in 2016. After its closure in 2021, the demolition was confirmed.
Archipel, together with the Ostend heritage association Dement, pleaded for the preservation and reallocation of part of the complex: the heroic hall. After the removal of the outbuildings, it could be incorporated into a park as a city hall. A petition for its redesignation was signed by 3000 people, including many inhabitants of Ostend and hundreds of architects. The brutalist building deserves a new life as architectural testimony and urban memory from the 1970s.
(Architectural heritage, high locus value list) 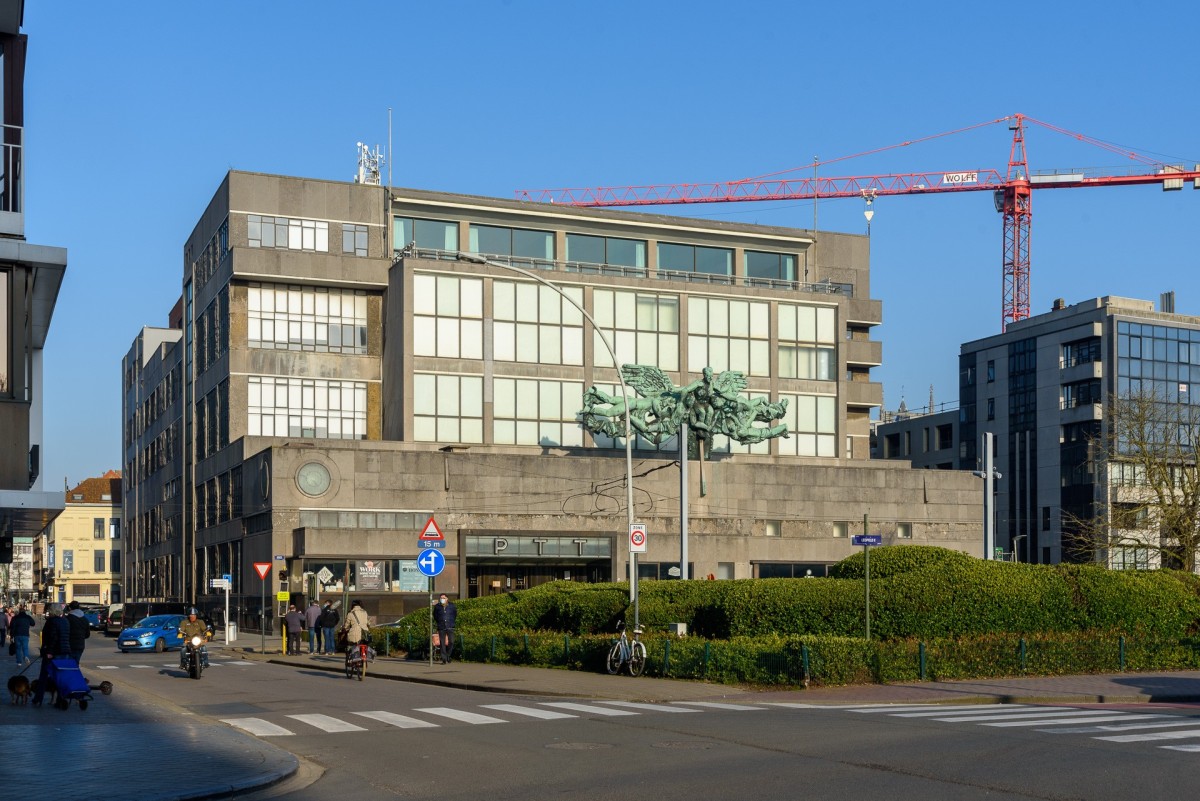 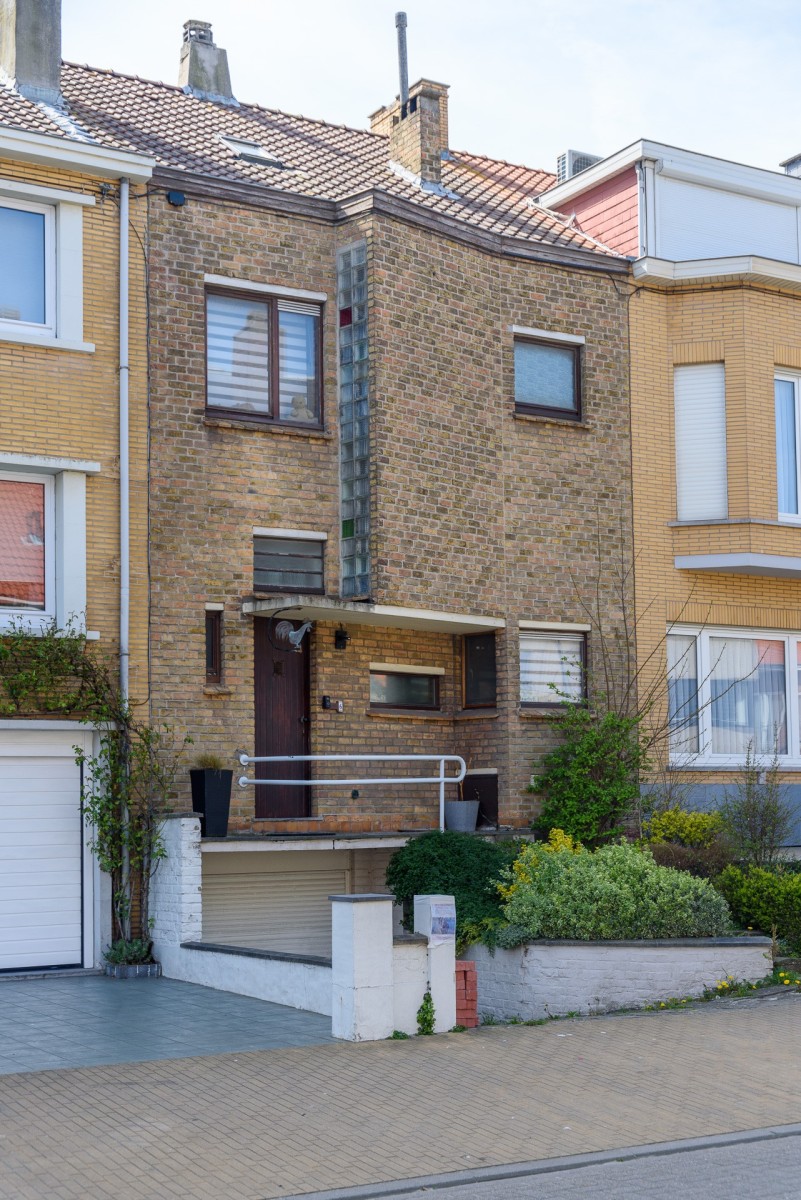 The absolute masterpiece of Gaston Eysselinck. A combination of a post office and a public space for telegraphy. Two high floors for the relay cabinets. On top the former staff restaurant with terrace. Art integration with a sculpture by Jozef Cantré and in the interior work by Jo Maes. Since 2012 cultural centre De Grote Post.
(Protected as a monument)

The last of a series of houses by Eysselinck in which the kitchen was situated on the street side. It was popularly called “the bunker”, because of its closed facade. Particular to this house was the introduction of a diagonal line in a simple rowhouse, which can be seen in the staircase in the facade. The joinery was completely replaced.
(Architectural heritage) 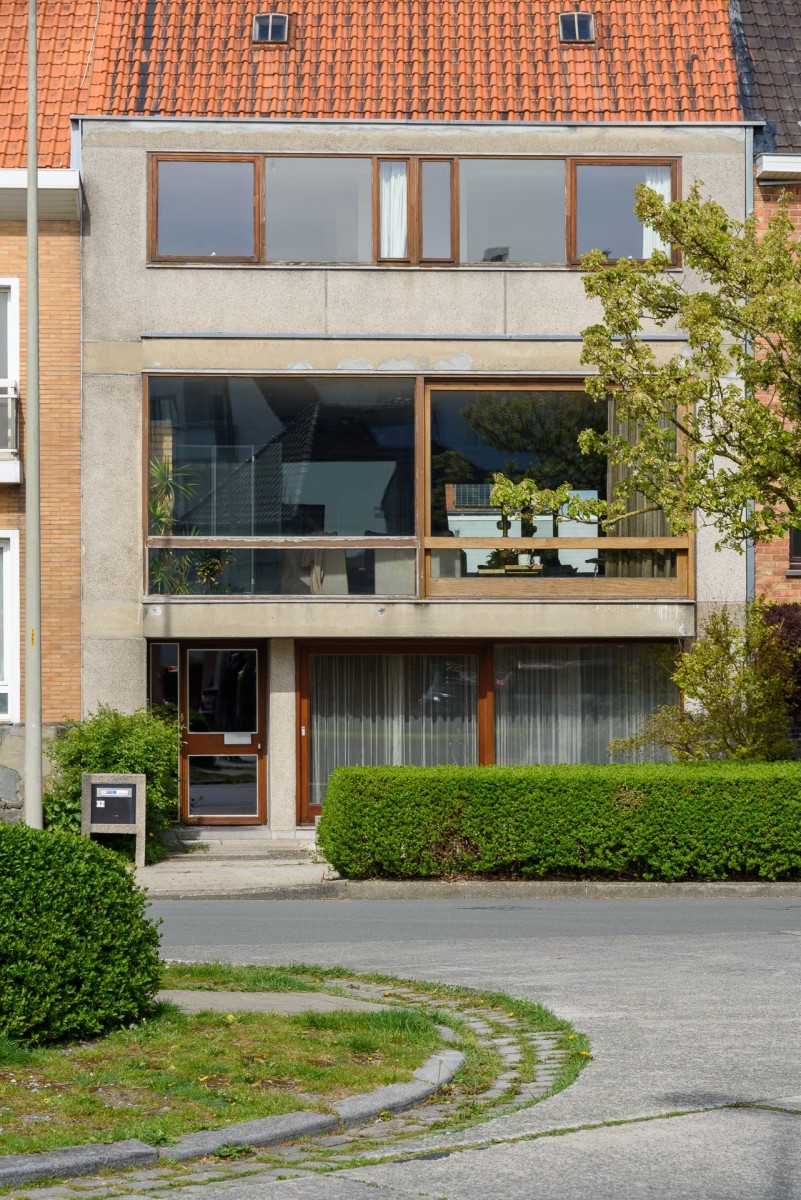 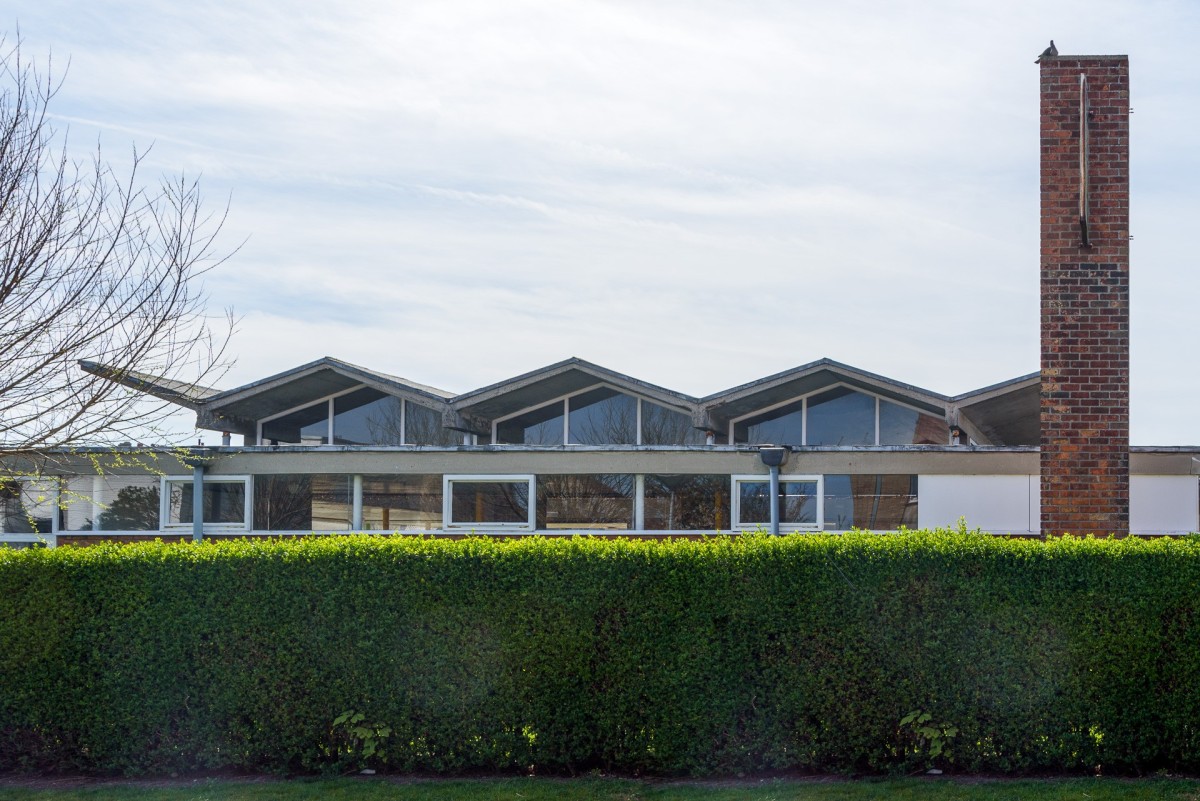 This terraced house from Marcel Molleman’s second period (1960 to 1988) after his return from Congo is his own home with a study. The facade consists of a pattern of gravel concrete slabs with horizontal bands of exposed concrete. The interior walls are in uncoated rough yellow coastal brick. Originally, it was also the intention to provide the ceiling with roughcast concrete, but this idea was subsequently abandoned at the request of his wife, who could live with rough walls but not with a rough ceiling. In the house, he designed the entire interior himself with built-in cupboards and with furniture from his time in the Congo (dining table, lounge chair, coffee table and side tables). The white wall cabinet, the desk and the coffee table with marble top in the front office were designed somewhat later. This house was published in 1965 in Architecture magazine.

This is the first large commission Marcel Molleman received after his return to the Congo. There are many similarities between the school building in Gistel (1960) by Paul Felix, with whom he was a good friend at the time. This influence can be seen in the composition of the closed façade and the glass strips under the roof. The school is also constructed with visible permanent brickwork in the yellow coastal brick for the interior and exterior walls. The four nursery classrooms have direct contact with the playground through the large sliding windows. On the street side, the classrooms are connected by a long corridor with a continuous high band window, which allows the roof plate to “float” visually above this wall. The inner playground is covered by a folding roof in reinforced concrete that forms a higher volume. The school was published in 1965 in Architecture magazine.
(Architectural heritage) 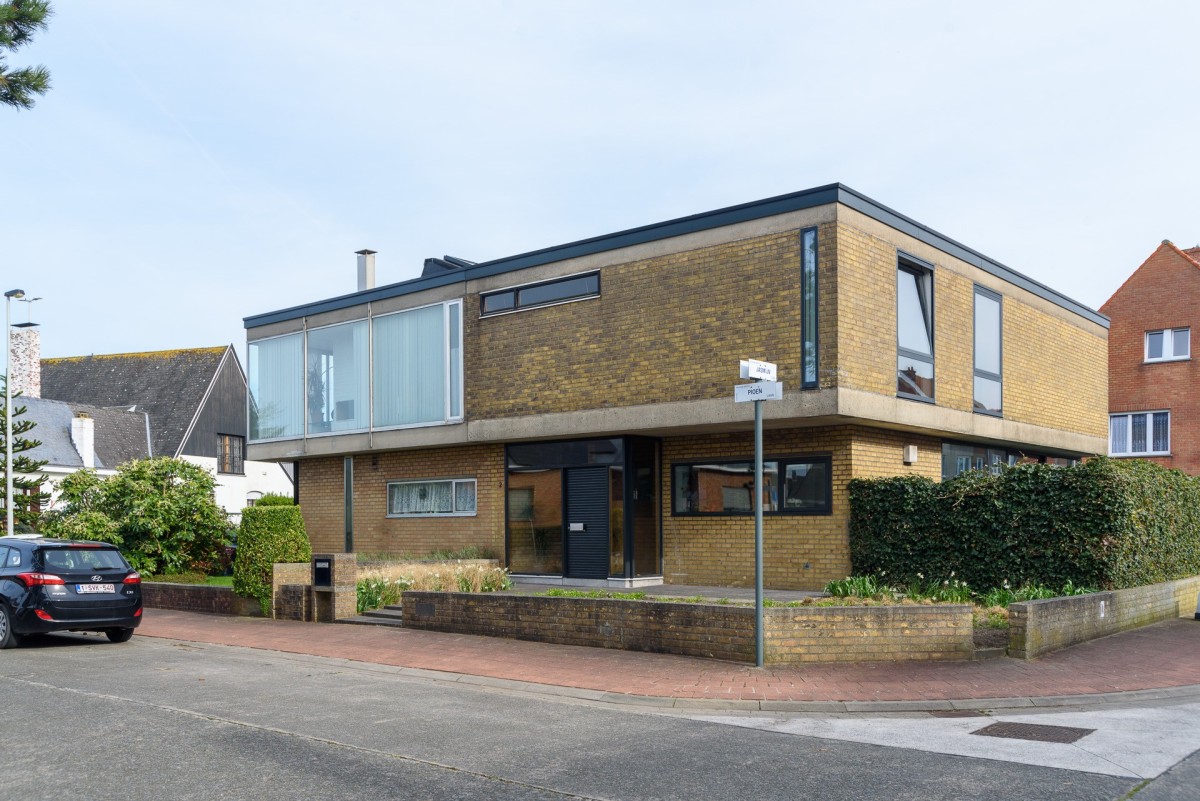 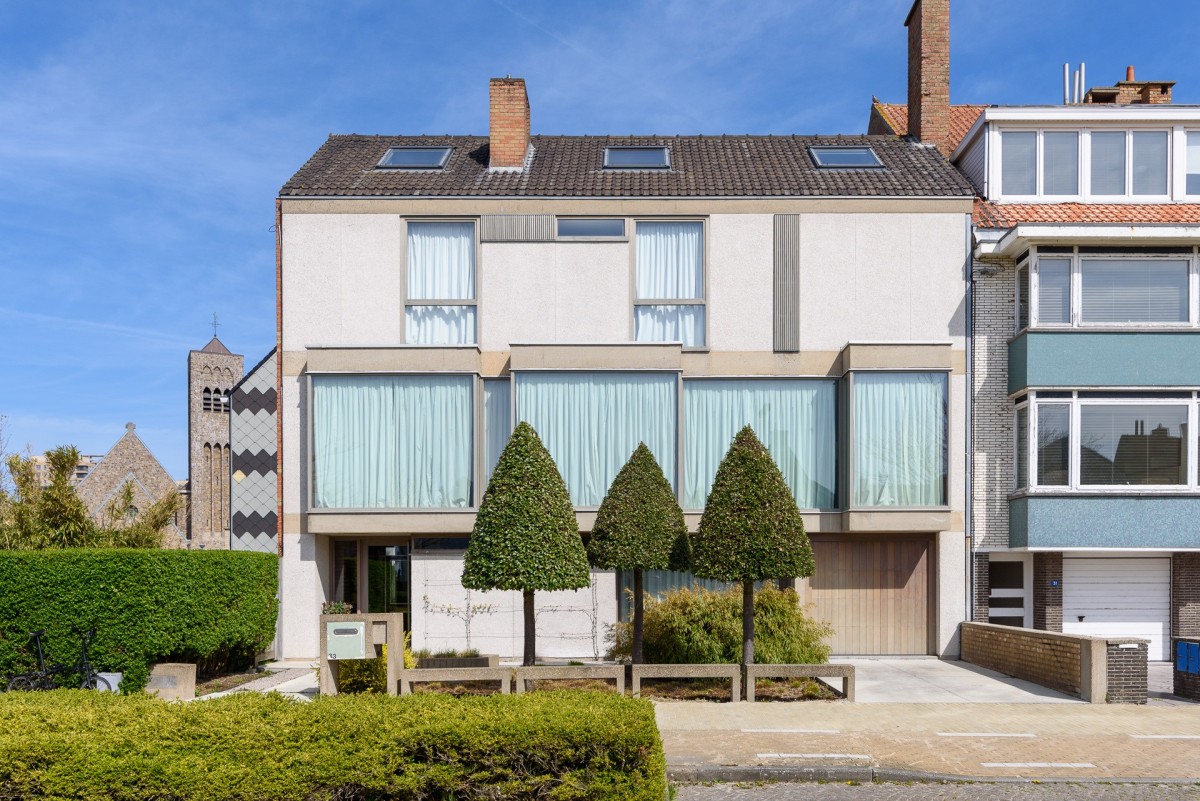 This house is a semi-detached building from 1964 to which a mirrored house was added in 1966. Remarkable is the use of aluminium windows in a natural colour that is not to be found in Marcel Molleman’s other projects. This was done at the insistence of the client of the house built afterwards. Despite the different choice of materials for the joinery, both houses form a beautiful whole.

Whereas Marcel Molleman opted for composition with front and rear projections for the façade, the rear façade has a more plastic form. Thus, on the outside of the rear façade one sees the semicircular volume in brick behind which the spiral staircase is located. On the inside, there is a sculptural filling of niches and volumes in visible masonry that would appear in much of his later work. The house was published in 1975 in the periodical ‘Building with Brick’. 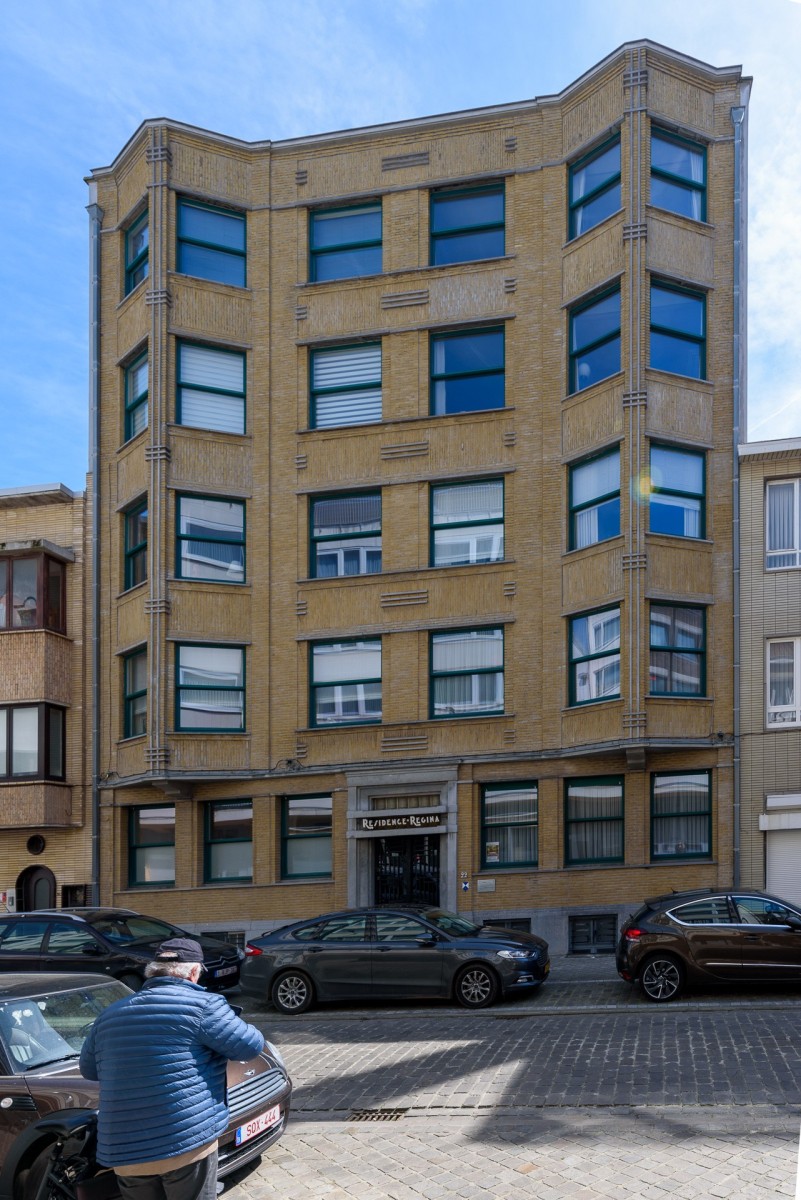 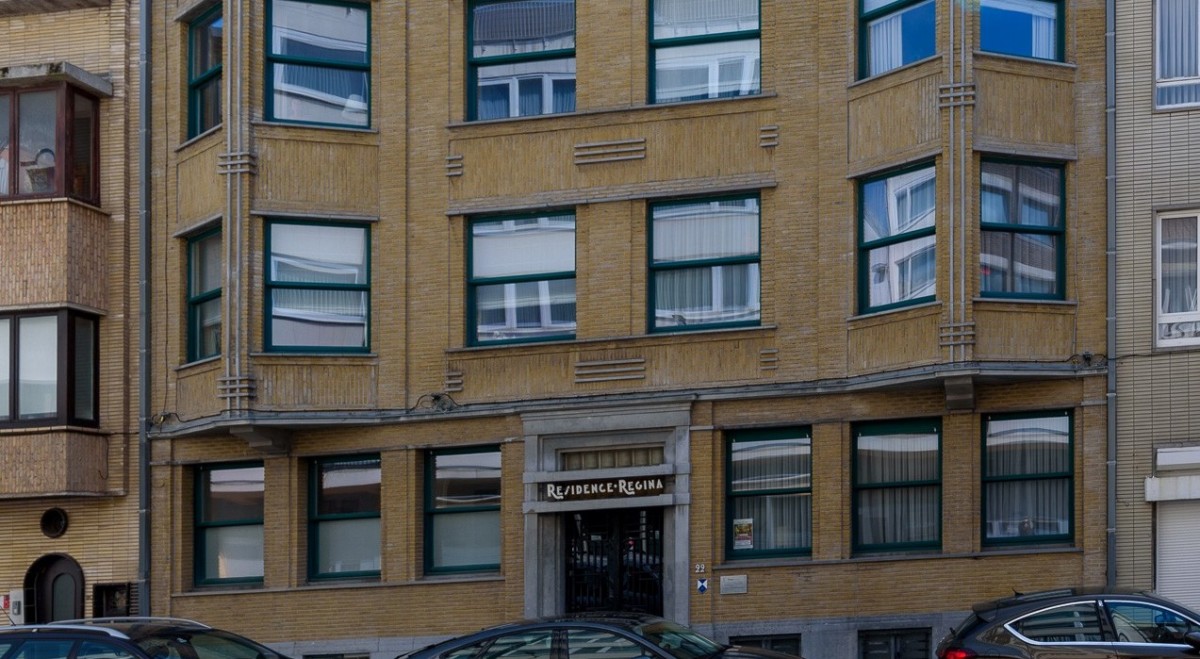 The apartment building, with its two angular bow-windows and its meticulously decorative facade graphics, has a rich street scene. The generous entrance area continues the soothing art deco decor with wrought iron and marble leading to an open staircase and lift landing.
(Protected as a monument) 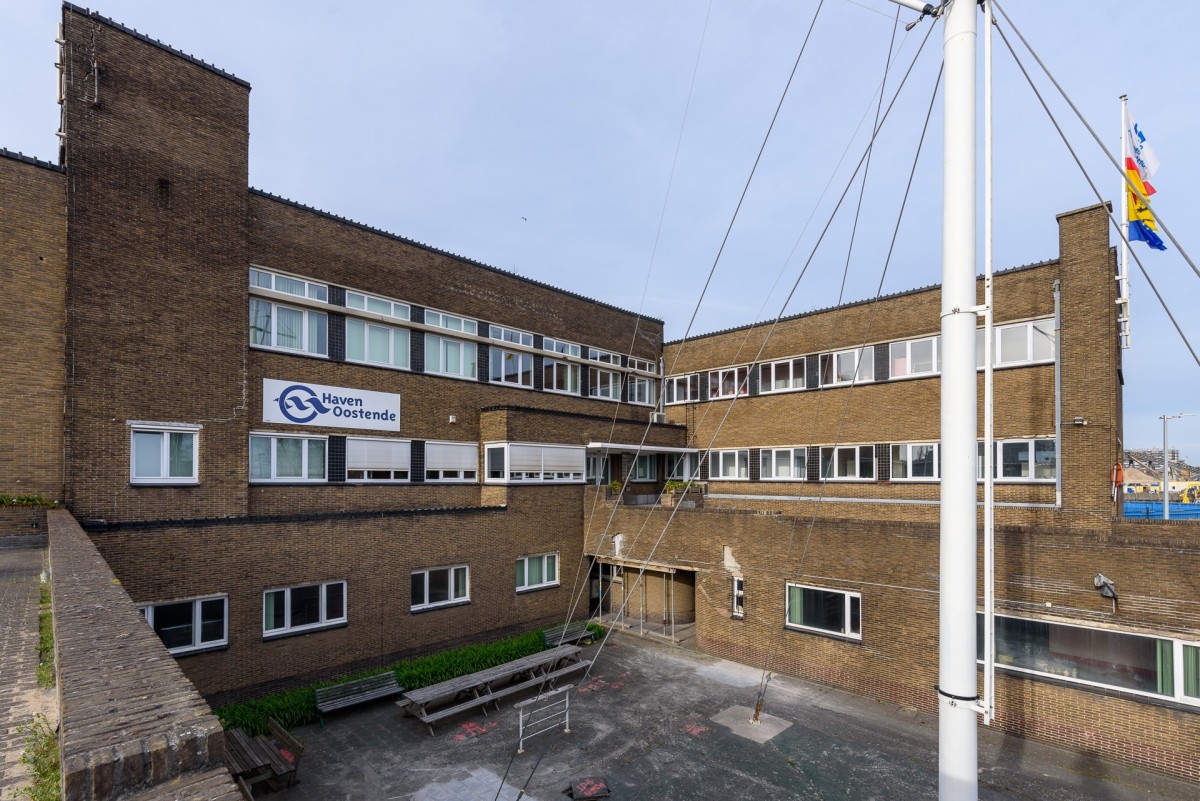 In 1930, Pierre Verbruggen won the architectural competition organised by the Ministry of Transport for a nautical college. The modernist complex leans towards the New Objectivity. It is grafted onto the peninsula in the inner port with functionally delineated services in parallel wings and a connecting transverse wing. It was awarded the prestigious Van de Ven architecture prize in 1933. Shortly before the war, an executive wing was added in the same materials and detailing, which eliminated the desirable asymmetry. Today, the complex houses the port authority of Ostend.

(Protected as a monument) 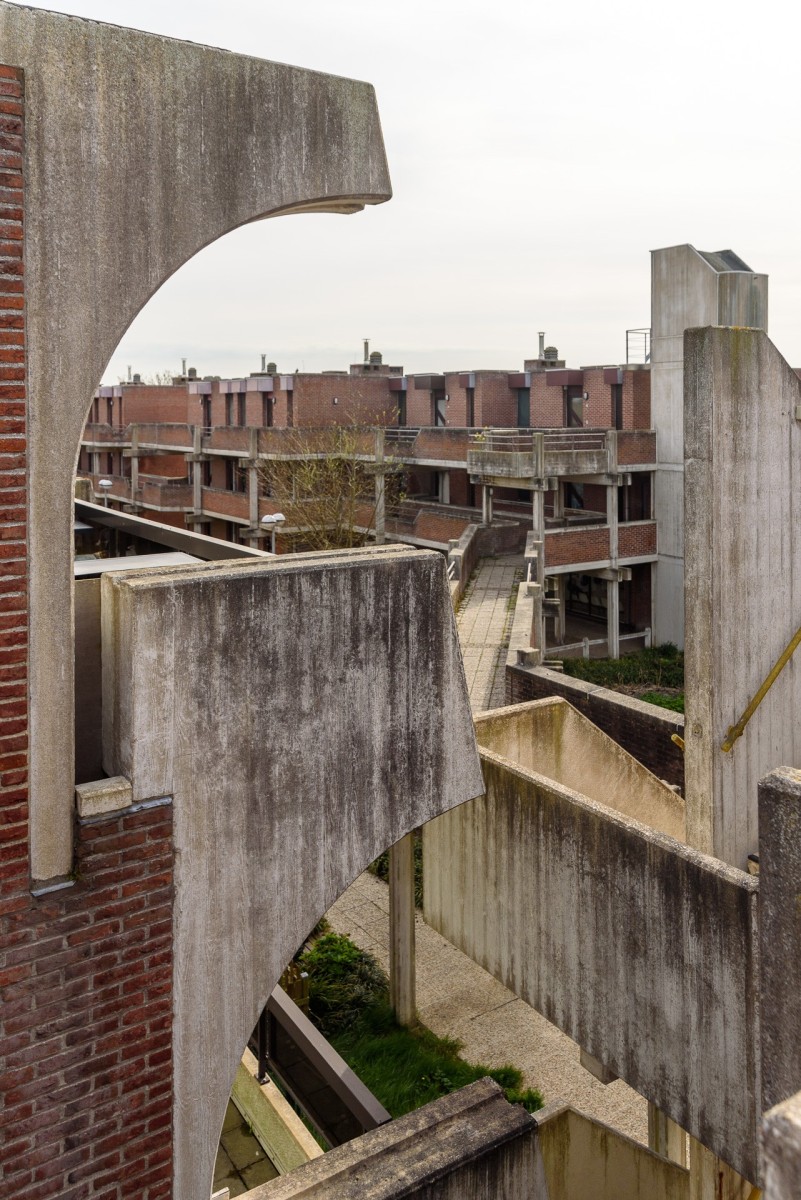 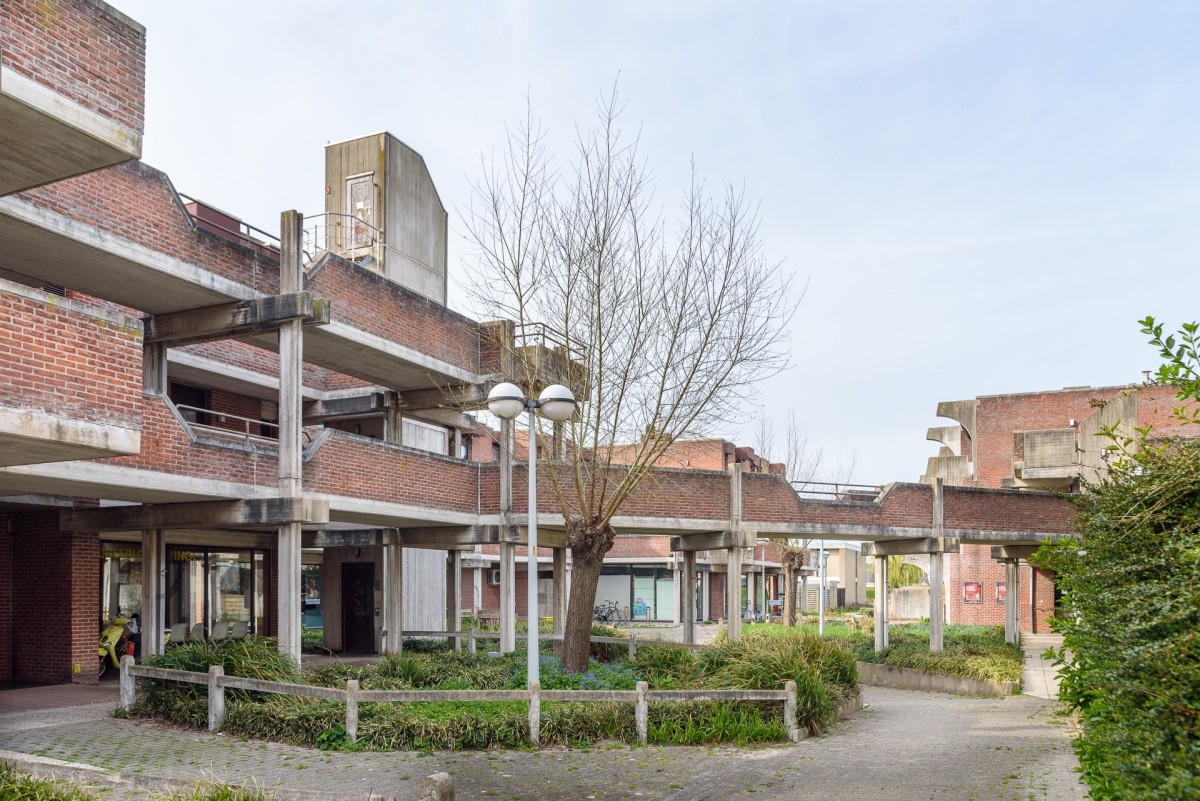 In this social housing district built by De Gelukkige Haard, 389 houses were built, later expanded with 125 flats. In popular speech it was called the ‘sulphur box’ and ‘legoland’. In the traffic-free area with many public and private green spaces and a central agora, shops and a café, pedestrians and cyclists have priority. Cars have disappeared to the periphery. The low-rise units are ground-connected and rigidly orthogonal in design. The gallery houses in the centre formed linked clusters in exposed concrete and brick with monumental staircases, lift cores, skeletons, footbridges and sun-oriented balconies between heavily accentuated sculptural side walls, related to Braem. This housing estate, which is said to have been inspired by residential complexes in Malmö and Karlsruhe, is a late example of Brutalism. A phased renovation is planned. Some parts will be demolished.
(Architectural heritage)

The bicycle tour takes us along the following projects: 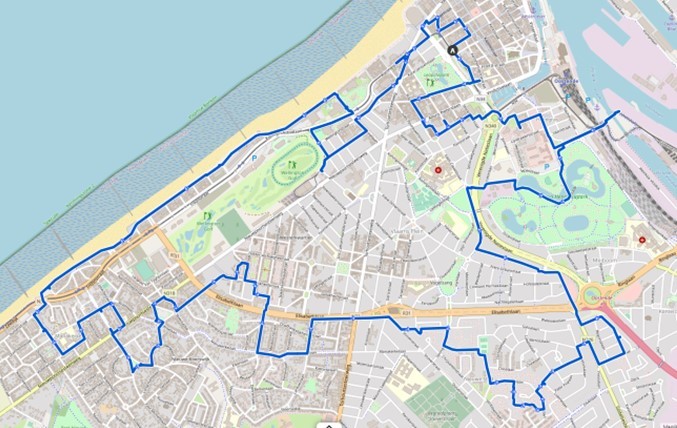 We provide three groups of maximum 20 participants + 1 guide leaving consecutively with half an hour in between each time.
The first group leaves at 9.30 am. Starting and ending point: De Grote Post.
The total route of the bike ride is ± 20 km and takes ± 6h00.

Practical information will follow after confirmation of your participation.

If there is a lot of interest, we will consider organizing the bicycle tour a second time.

*Not a member of Archipel?
Please note that they have priority until one week before the activity.
You can now become a member to enjoy priority yourself.