We are facing a huge renovation challenge with regard to the severely outdated residential patrimony, and not least with regard to the post-war residential towers. Where until a few years ago demolition-reconstruction was still proposed without batting an eye, now the quality of the buildings on the one hand and financial / ecological impact on the other hand have more impact on decisions to demolish or not. We take a closer look at three large residential ensembles (two towers and a neighbourhood) and listen to the challenges and opportunities through a research project on the transformation strategy of a residential tower in St-Joost-ten-Node.

The 382-unit Goujons building in Anderlecht, with its eighteen floors, is undergoing a renovation of its shell, with the creation of spacious, playful terraces. FVWW will talk about the renovation of the Braem patrimony in the Arena district of Antwerp, a total design, from macro to micro level, designed from a single functional, architectural, artistic and social vision. The third residential tower, Tour Brunfaut is in Molenbeek. It will be thoroughly redesigned and rethought from the inside to introduce light and quality of life. 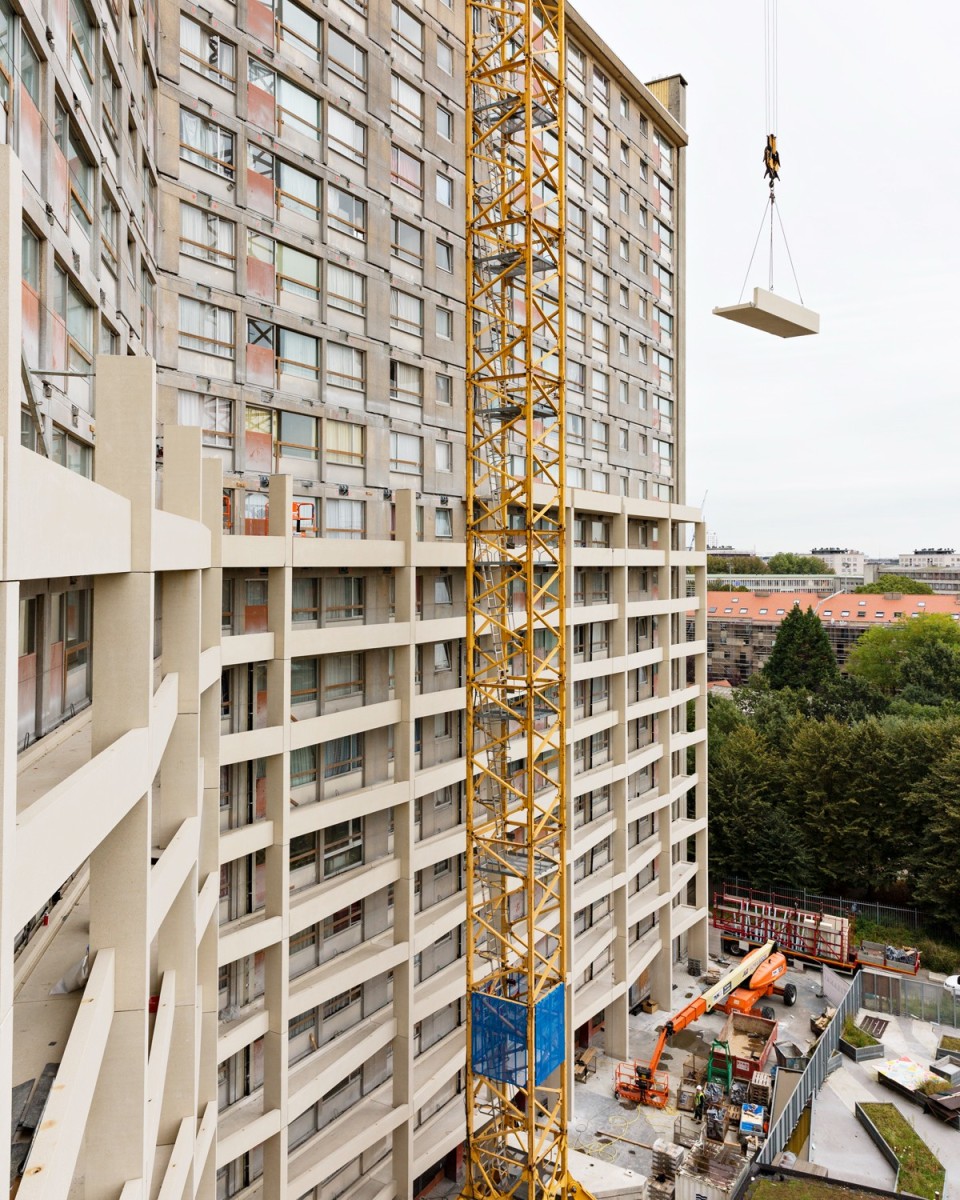 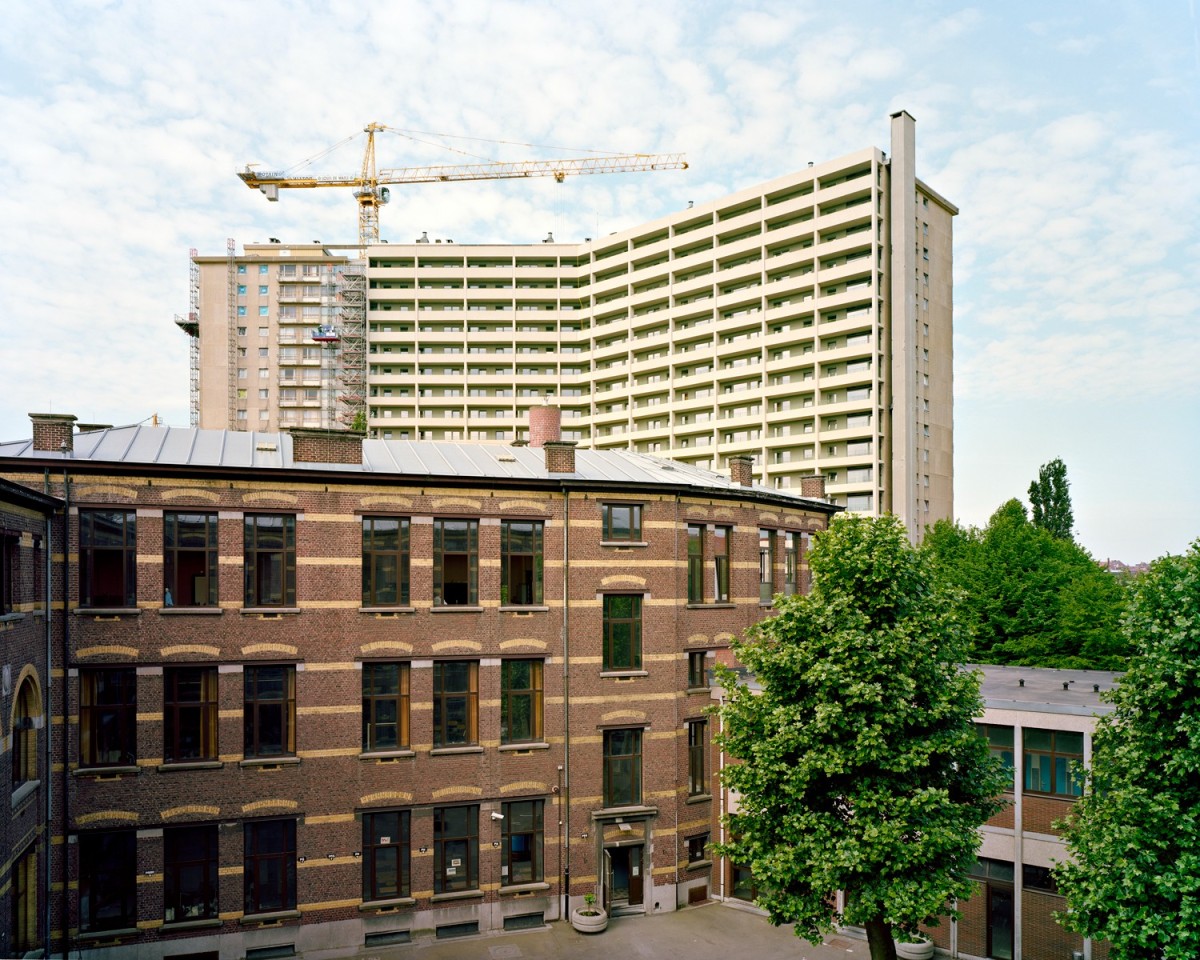 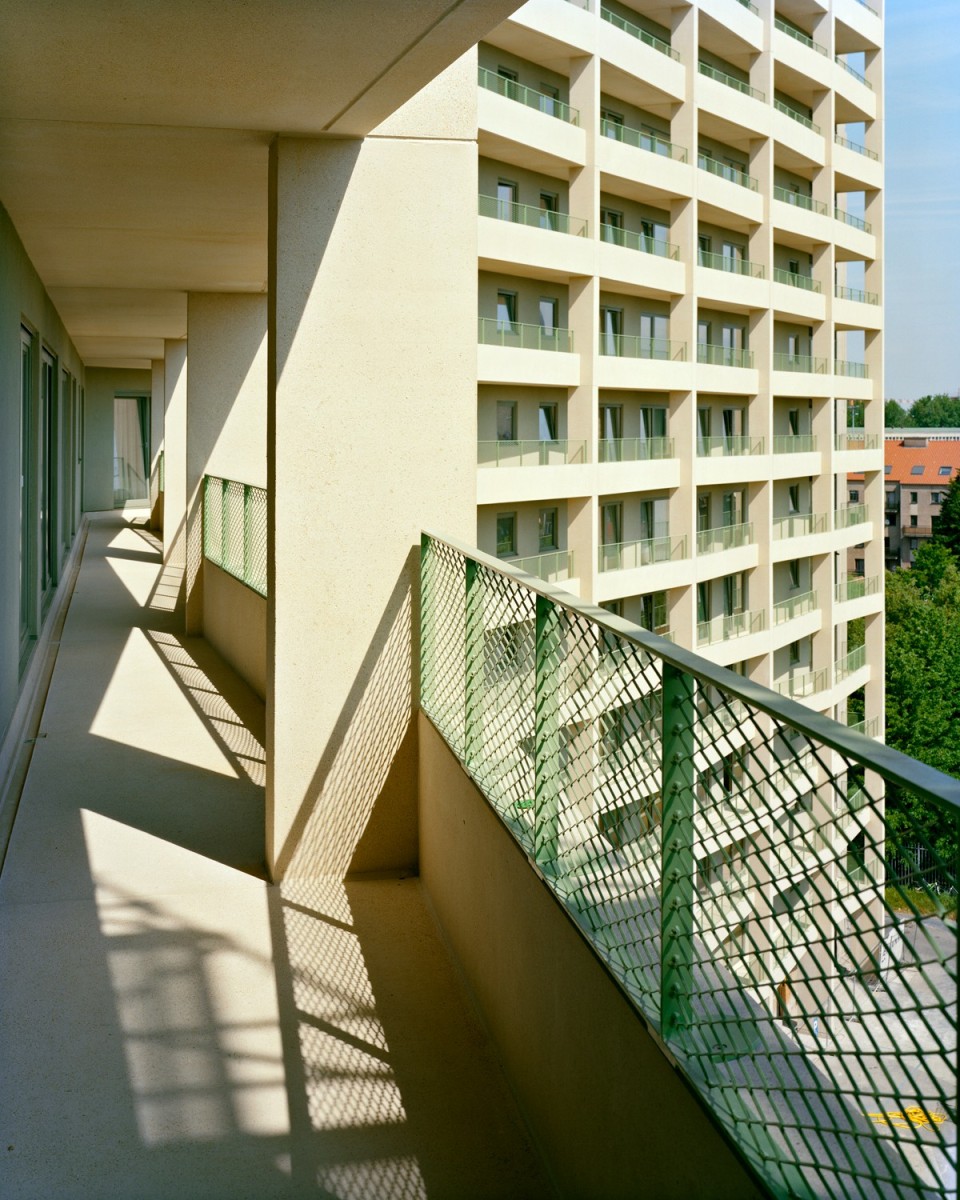 Tour Goujons suffers from the general stigmatisation of anonymous residential blocks. However, its particular form could provide a radical change in image. Unlike other buildings, the fold of Goujons does not respond to its surroundings, but submits to the landscape by following the ancient bed of the Zenne. Tour Goujons is actually part of a radical redevelopment project for the working-class and industrial district of Cureghem. Developed between 1968 and 1971, the PPAS Goujons project aimed to connect the developments around Place Albert with the new buildings along the canal, in what would eventually become a true waterfront. Although initially part of a modernist ensemble, Tour Goujons remained an isolated building. With its 18 floors, this tall building represents a break in the urban fabric. The renovation of the building’s shell, prompted by the premature deterioration of the existing balconies, is an opportunity to create spacious terraces. Their structure evolves and is refined throughout the height of the building. The massive railings on the upper floors thin downward, with a progressive folding of their alignment. With a strong form, the ensemble marks the symbolic presence of Brussels’ historic river in the Zenne Valley skyline. From below, the movement of the balconies anchors the building in its surroundings, giving it morphological and historical significance. 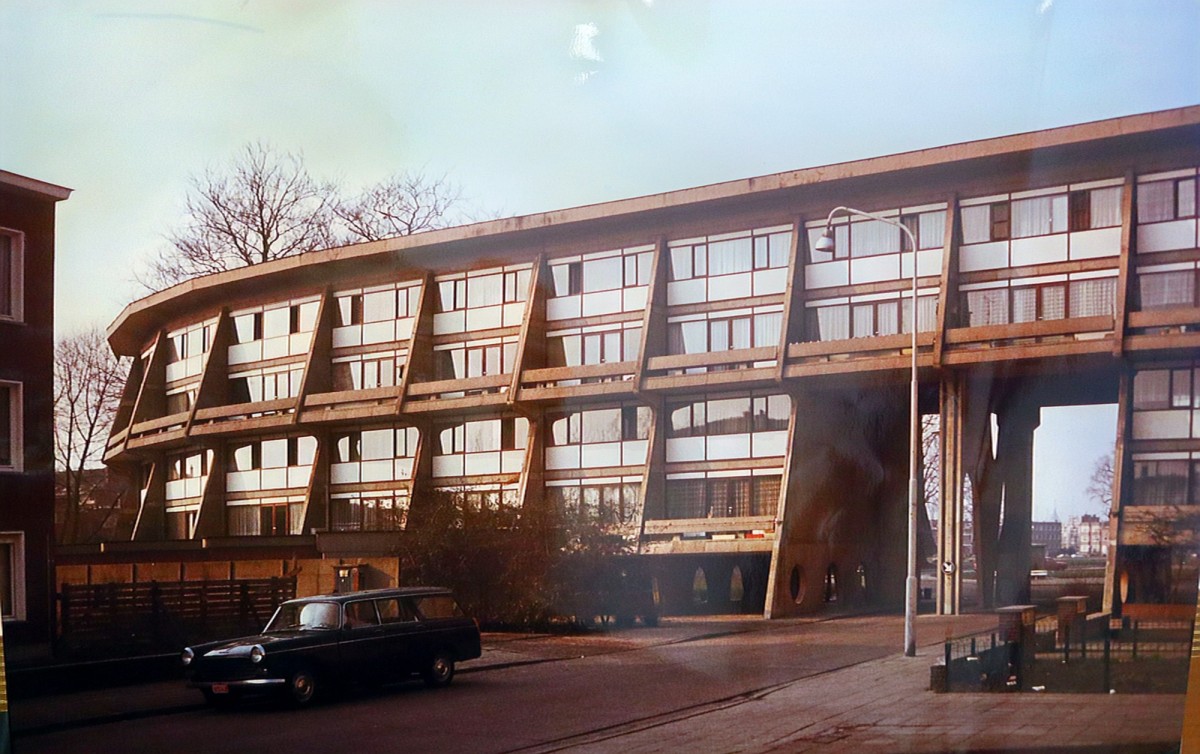 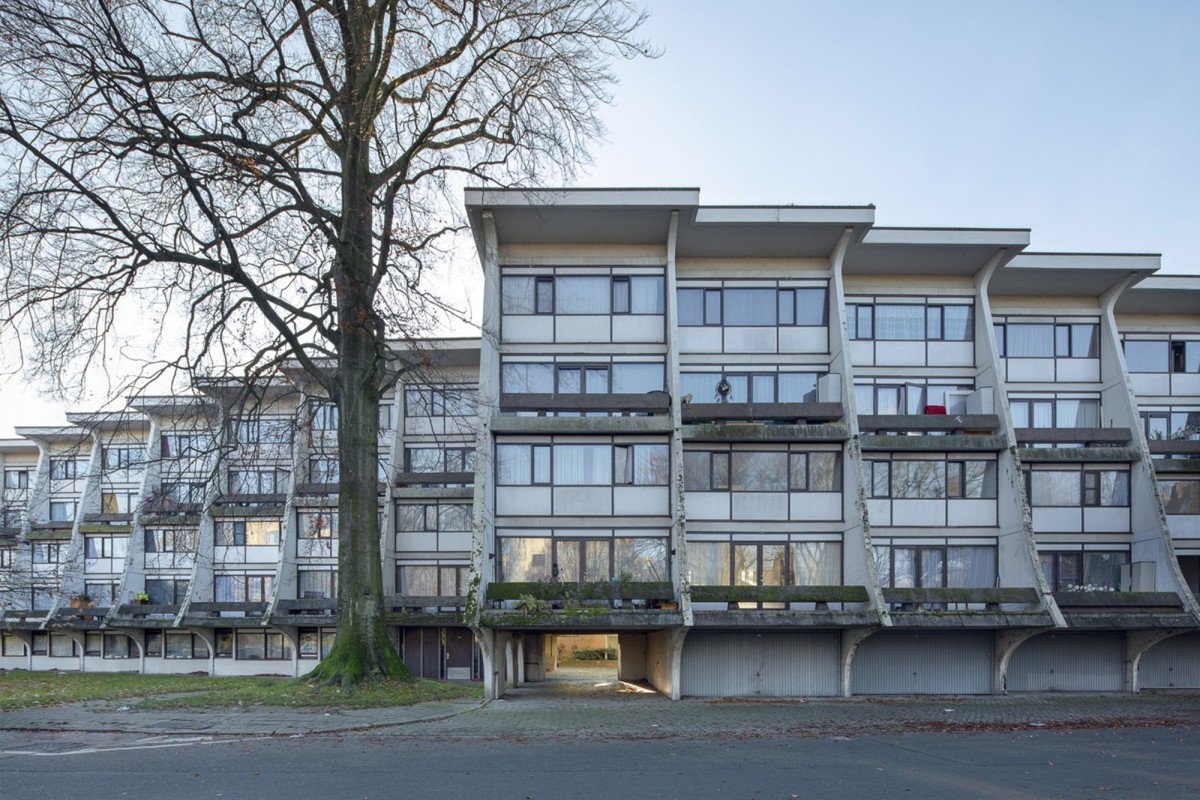 
“The site and the task are exceptional. The Arena district is a total design, from macro to micro level, designed from a single functional, architectural, artistic and social vision. We experience this overall concept through the large amount of traces and materials still present today. Our appreciation and vision on this starts from the public space of the fortress park to the building interiors where the residents experience the smallest detail. We aim for maximum conservation of Braem’s work. The restoration and transformation of the Braem heritage towards contemporary living standards requires a well-considered approach. We ensure a strong anchoring with the unbuilt space and ensure legibility. In our proposal, we empty one in three bays and use this space to improve the houses to a contemporary living standard. In the bays we empty, we can reuse the valuable parts (stairs, furniture, etc.) in other houses. By emptying, we can better preserve what is important.” (website FVWW)

Tour Brunfaut | a229 in cooperation with Dethier Architecture 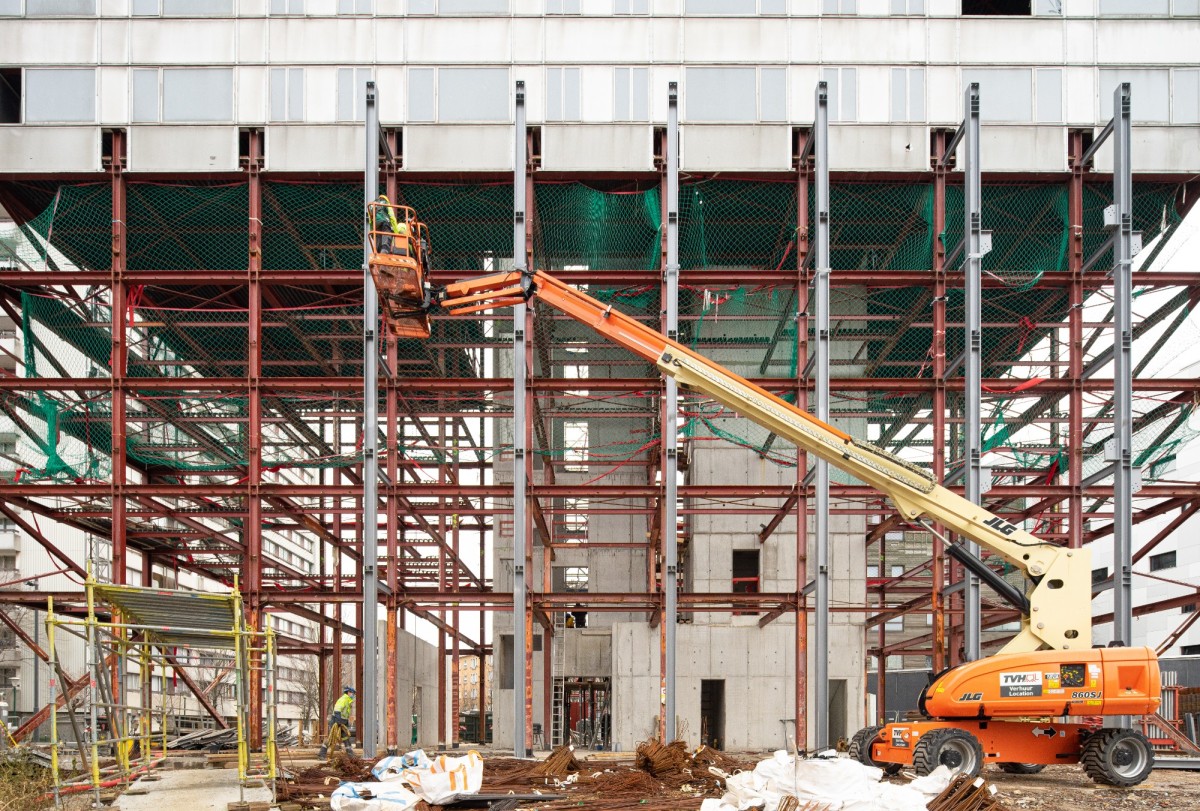 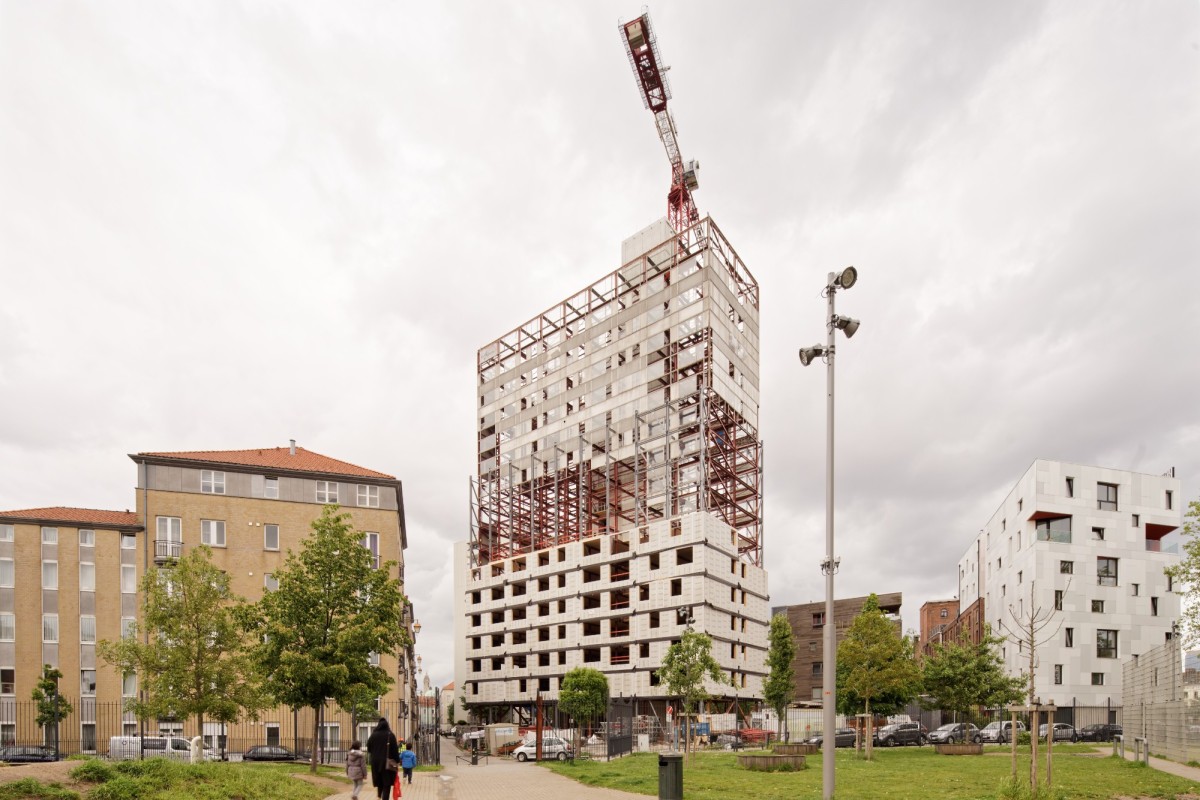 Maxime and Fernand Brunfaut built this tower in 1964. Very special is its steel skeleton, unique in Brussels. Today, the building has many deficiencies in terms of safety, living comfort and energy performance. The competition of Molenbeek Housing for the thorough renovation of the tower was won by the offices A229 and Dethier Architecture. To preserve the hundred or so homes and bring them up to contemporary standards, the tower will be doubled: it will be expanded in height – five additional floors will be added – but also in width. In 2016, the project became laureate of be.exemplary because it offers a complete and qualitative response to urban challenges: densification, treatment of the skyline, restoration of the tower as an urban landmark and refurbishment of public spaces. The architectural concept is distinguished by the quality of housing, the different typologies and the organisation of community spaces. A technical added value is derived from the preservation of the existing structure, the addition of an ingenious construction system and the choice of materials, based in part on their life cycle.

Ward Verbakel illustrates the challenges and opportunities through his experiences in Brussels, including a research project on the transformation strategy of a residential tower in St-Joost-ten-Node. PLUS Office architects is a Brussels-based design team in architecture, urbanism and landscape. Each project is an opportunity for them to re-examine and question existing conceptions of architecture, public space and natural systems.