Steven Holl won the game by playing it tactically. He has no doubt charmed the city government by inspiring his design of the Casino at Knokke’s pride: the 35-meter wide wall painting by Magritte.

The American participant and winner Steven Holl has won by playing the game tactically. He has the City Government no doubt charmed by his design to inspire on Knokke’s pride: the 35-metre-wide wall painting by Magritte in which a sailing boat and a fish to see. The form of the 108 meter high tower is inspired on the sails of the boat and a second, low volume winds here like a fish at the back. In the porous rear triangle has the same forms used as Holl are rightly praised Simmons Hall for MIT Cambridge, Massachusetts. Only had the penetration on the different scales in that design a much clearer meaning and function. 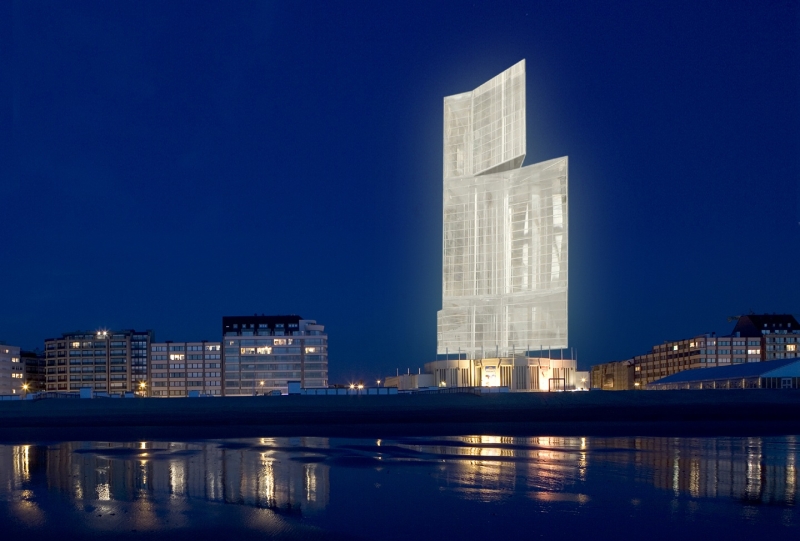 The gigantesque kolos – why is the requirement of a ‘ beacon ‘ again and again thought to allesverstikkende high-rise?-places itself astride above the current casino building, designed by Léon Stynen. The maintenance of this building has a positive influence on the verdict of the jury. Yet admirers of Stynen’s architecture their heart. A tower teetering above a modernist jewel is a top-notch engineers work; working out how this surgery not all grandeur of the original casino does disappear, however, is the biggest challenge.

Exhibition and lectures cycle following the international architectural competition for the new Casino of Knokke.