(autotranslated) – “Huib Hoste …This Antwerp fled to West Fleming was strikingly ambivalent personality, angular and cultured, sober and poetic structure of Germanic and Latin intellect, traditional and avant-garde formed Huib Hoste vermocht it, absolutist. radicality of the Modern Movement to catch in the perception of the land-nature, nature image and people’s mentality determinate cultural banality and do carrots, and so he created a modern architecture that naturally fit in with the great tradition of craftsmanship, vision and joie de vivre “(KN Elno, “Antoine Pompe et l’effort modern en Belgique ’1890-1940 Brussels, 1969, pp. 74-75). “Hoste’s uniqueness lies not in inventing a new language. Its form elements are almost always those that are common in modern architecture. Only the way he presents them alongside each other so little bound to convention, the whole completely originally . Through his focus and his lacquer convention, this work follows a major folk tradition, and it is, therefore, perhaps, much richer and truer than many other building are more prized but less really is. “ (Marcel Smets’ Huib Hoste, defender of a new architecture, Brussels, 1972, pp 143-144.).

Marcel Smets begins his monograph on Huib Hoste (Huib Hoste, defender of a new architecture, Brussels 1972) to state that Hoste “is about 45 years old at the time that modern architecture has its heyday Hoste -. Born in Bruges on 6 February 1881 – so belong to a generation that grew up in a time of eclecticism and neo-styles and from there a path searched for a modern design, it is important this right moment to draw attention, because this fight for a way out. from “the rotten nineteenth-century architecture ‘will remain with him the rest of his life like a nightmare that his imperturbable faith in the new pragmatism justifies.” (Smets, 13). The decision of Hoste is from the article “Give in U of slogans and Battle Words”, during the German occupation published as a defense of the New Objectivity against the revival of regionalism in architecture, in the magazine Architecture and Reconstruction (year 2, No. . 1, January 1942). 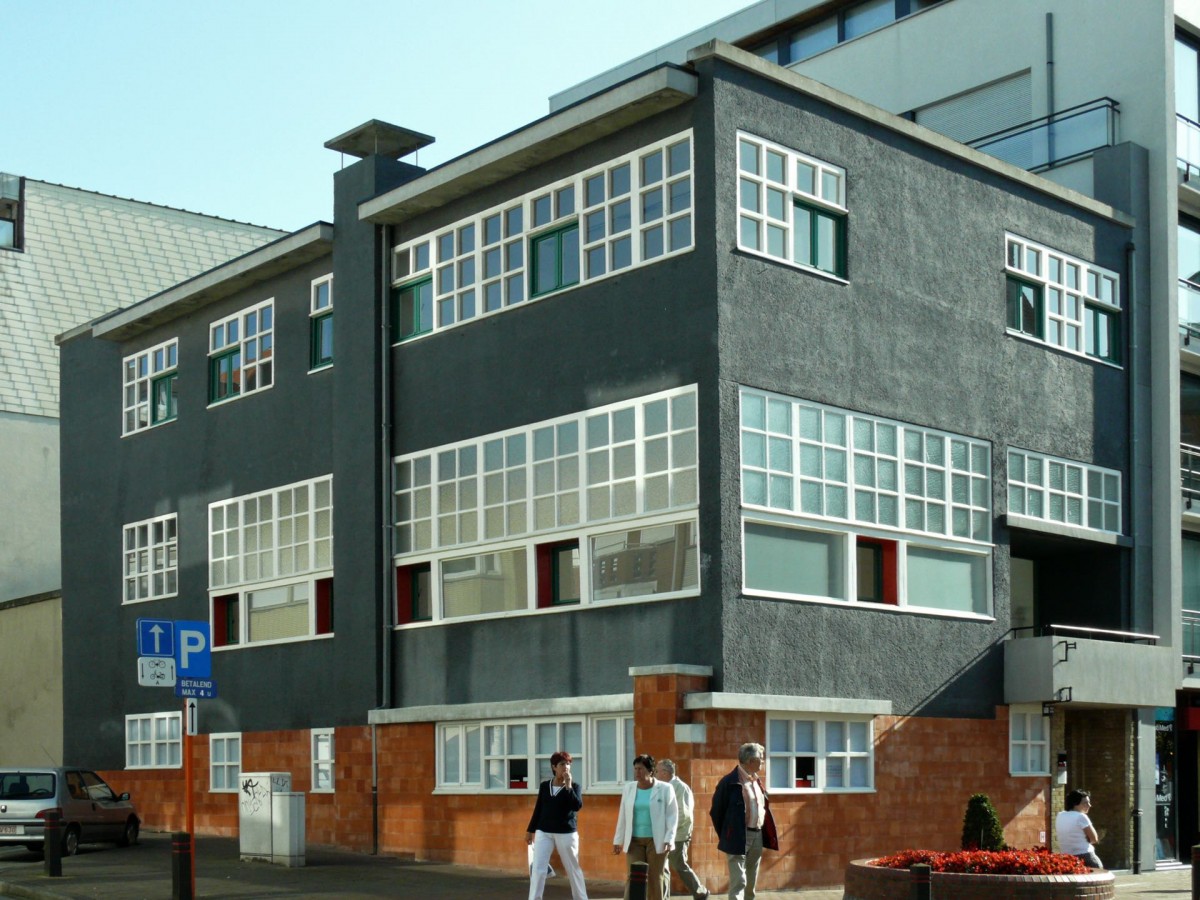 Hoste himself had an expansive voice traditionalist background: education at the Bruges Academy as a draftsman working at the Bruges city architect Charles De Wulf, published studies on the traditional Flemish architecture … He aims to this escape by to follow Ghent University classes Louis Cloquet, an architect with a strong Catholic, neo-Gothic St. Luca background but as Berlage, Horta, Gaudi, Wagner and other pioneers of modern architecture … also inspired by the nineteenth-century neo-Gothic rationalism of Viollet-le-Duc.

In later writings, after World War II, will Hoste his traditionalist background of itself depreciate to register as a modernist international mindset in the history of architecture (see eg: “Evolution of the Modern Architecture”, in: Striving, Volume 10, Nos . 11 and 12, Aug. and Sept. 1957). It is undeniably true that Hoste in the thirties, in his’ international period “as Smets presents summary, had joined the” international style “of the Modern Movement, albeit that he (looking back in 1942!) Nonetheless a “Flemish approach speaks of the New Objectivity” (Smets, p. 55). And as is evident from his activities as an architect in the twenties, after his return from the Netherlands to Belgium in 1919, an undisputed avant-garde position, “Hoste … as the greatest champion of the new spirit … Hostes office to St. Michael was like a progressive island in a reactionary environment (Smets, pp. 16 and 17). Hoste believes that “it will come to an international style of universal significance which of course will all local, regional and national communications must give way “(in” On Truth, I “(1921, no. 2 (February).). Marcel Smets writes that” in the end so that Hoste despite (the) belief in this period of work which generates a highly distinctive (Vlaams ?) character property “(p. 49).

Three aspects of Huib Hoste still lagged underexposed and the lecture will be given more attention.

From 1928 to 1937 led Hoste he founded the avant-garde magazine Building. In parallel, he developed a number of rather “traditionalist” activities with a distinct Flemish and Catholic character.

In 1927 and 1930 he took part in the exhibitions organized in Antwerp by the Pilgrim, one in 1924 by Felix Timmermans, Flor van Reeth and Ernest van der Hallen established Flemish and Catholic modernization movement in religious art. In the same period Hoste has built a number of homes suited as examples of “silent modernism” can be considered: Billiet house in Bruges (1927), Geerardijn home in St. Andrew (1927), The Wolf House in St. Michael (1929), Van Cauwelaert house in Koningshof (1930) and studio house Van Dijck in Schilde (1930). The subsequent work – the house in Zele 1931 – is his “international period”.

Between 1935 and 1940 Huib Hoste is working intensively on the distinct Flemish and (slightly less pronounced) Catholic magazine New Vlaanderen, a Flemish course runs between traditionalism and modernism internationalist. From this “traditionalist” background it seems interesting Hostes texts during the Second World War (in Architecture and Reconstruction) and after (for example in De Standaard) rereading.

Hostes architecture can be understood only from the dualism of modernity – tradition … This dualism is however without more typical of modern architecture whose theoretical foundations in the second half of the eighteenth century were laid and built in the nineteenth and twentieth centuries . The nineteenth-century “architecture of engineers” and the twentieth-century New Objectivity in their technical and functional rigorism (the term was used in the eighteenth century for an Italian group of radical rationalists) an exception. Undoubtedly explains Hostes for visibility in front of the latter: in its architecture, he remains silent modernist.

Just when Huib Hoste in November 1926 a major shipyard accident happens that his career would affect radically reverses Henry van de Velde returned to Belgium after an absence of a quarter century. Hoste takes to join the “silent modernist” Henry Van de Velde meanwhile has become. Together they make the early years of La Cambre with, together they publish in 1930 a combined volume of their respective magazines and Arts Building. Hoste will try in vain through Van de Velde to acquire a position at the University of Ghent and later within the General Commissariat for the country’s reconstruction. Henry van de Velde meanwhile successfully to another phase of his already impressive career. Following will be the lecture by Steven Jacobs, as a prelude to lecture on Hoste, yet equally pay close attention to three late works of Van de Velde, the Belgian pavilion for the world exhibition in Paris (1937) and New York (1939) and the related National Technical School in Leuven (1936-42).

The nomination of Steven Jacobs gave a very upholstered overview of the ideas and work of Henry Van de Velde during his second Belgian period up to the design of the Ghent boekentoren. It was a lecture with an open-ended.

Luc Verpoest hooked on this further and discussed in the first part of his lecture three late works of Van de Velde, the Belgian pavilions at the world exhibitions in Paris (1937) and New York (1939) and the Technical School in Leuven (1936- 1942). This’ silent modernist work of Van de Velde said Huib Hoste strongly. In 1930 it came however to a collaboration of both magazines.

In the second part of the lecture, Luc Verpoest about the career of Huib Hoste architect between modernity and tradition.