Bruno Taut embodies the quest after the artistic avant-garde, the ethical social upgrading and the developement of the Gesamts-art.

(autotranslated) “The drawing board here in my office remains empty, every day the same … nothing I float in the air like an imaginary architect” Bruno Taut wrote in 1919.

Perhaps no architect during the first decades of the 20th century delivered a body of work that so pervaded the Geist der Utopie “as Bruno Taut. He embodies, as it were the wanderings of the artistic avant-garde between the ethical social upgrading, develop the Gesamts-work and concrete analysis of housing problems based interventions.

His first designs in Berlin show a kinship with the “abstract classicism of Gilly and Schinkel. (industrial, station buildings, residential houses in Berlin, workers in Magdeburg, the garden city Falkenberg in Berlin). In that period crystallize the ideals of Taut in the use of color, glass and at the service of social utopias.

First are highlights include Monument des Eisens in 1913 and in 1914 his Glashaus, a glass pavilion for the Werkbund exhibition in Cologne. Contemporary Scheerbarts wrote about euphoric: “Das Glas bringt uns die neue Zeit. Baksteinkultur tut uns nur Leit “and” The Europeans must first be shaken out of its comfort. The glass architecture will bring us the new culture. “ The pavilion was a City Krone in a pyramidal shape as a paradigm of cultural buildings.

During the first world war draws taut and writes his visions with a social missionary zeal. That ‘City Krone “is a plea for a new community ideal, mystifiërend and reverting to the unifying effect of the Cathedrals. He founds the “Arbeitsrat für Kunst ‘at which social ideals will be linked to artistic. He joined the ‘November Group’ and in 1919 organized the “Glasen Necklace,” a kind of circle of people who harass one another through chain letters. Taut’s pseudonym in the chain was ‘glass’. Walter Gropius called ‘Mas’. Common aim was the victory over the “Fossilized” academic architecture by fundamentally new forms. In his magazine Frühlicht ‘Mies Van Der Rohe published his first draft of a glass skyscraper.

Contemporary Theo Van Doesburg saw Bruno Taut’s visions do not sit and reacted sharply to his architectural drafting. “All of these dream projects demonstrations listener sickly nervous agitation. The modern architecture has dealt with magic and myth, it bases itself on a constructive reality. “ Those constructive reality came, also in the work of Taut.

After the war, he gets that chance in Magdeburg, where his color applications are radically implemented.
His most productive period, he knows when he returned to Berlin in 1924. More than ten thousand laborers, including the horseshoe Groβsiedlung, British and Siedlung Onkel Tom Hutte. 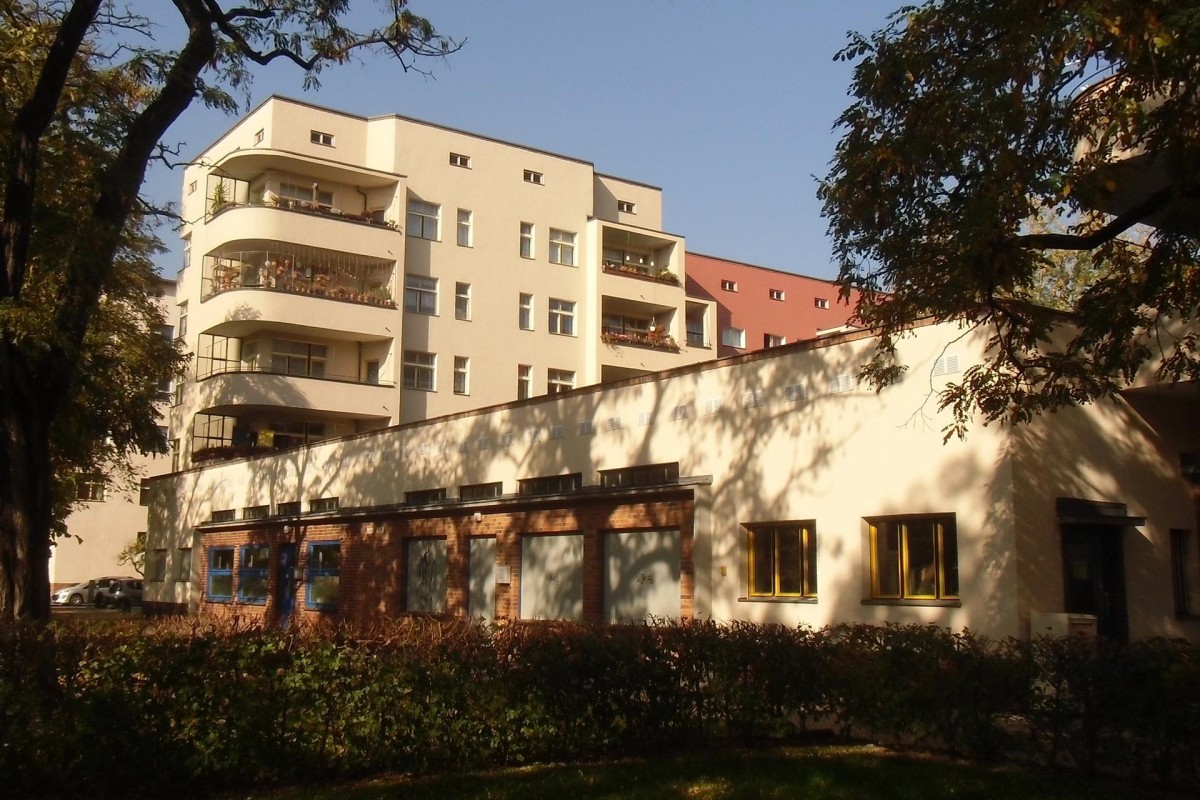 His social and artistic ideals are connected with an architectural idiom that today demands respect and admiration. ‘Building is essential. “ The utopia took shape. And also the realization that the ‘Geist der Utopie’ is not feasible without self destruction. In 1929 he dropped into his “five points of new architecture” is not about aesthetics. For Taut created beauty from the harmony between design and purpose. Material and construction have only one criterion: efficiency.

In 1932 Taut moved to Moscow in 1933 to Japan (where he was out walking with great admiration about the Katsura Villa in Kyoto) and in 1936 to Turkey. In the hinge between utopia and realization in the early decades of the 20th century, Bruno Taut was undoubtedly one of the most important key figures.

As the history of the Garden City movement turns out, was not only to improve the material living conditions of the deployment of its activities. Bruno Taut has always been opposed to a pure efficient architecture. Rationalization itself in his eyes without value. It is Bruno Taut the role of architecture in order for man to organize an area where there is a relation of the architecture of nature and as such the area of ​​mind is important.

In almost every design makes Taut core, this core presents itself as church, cathedral or community center, as well as square, courtyard, pond or balcony. The core is the carrier of the unity of the community and its harmonious relationship with the surrounding nature. The function of the core is sometimes the center of the contemplative, and refers to its shape mostly to organic.

Gilbert Decouvreur for Archipelago members not unknown. In previous lectures on Melnikov, Wright, Aalto, Asplund and Wagner, he succeeded each time in his inspiring way-using architecture to bring history to life and figures to situate their time.