On the basis of concrete cases, Jan Leyssens shows how space influences behavior, afterwards to enter into dialogue with the audience to find out how Timelab should be shaped from its temporal and value framework. 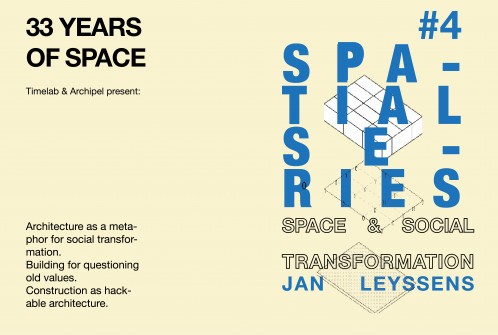 How do you design a physical place whose definition is by definition temporary? How can a space be supportive in shaping a context for social movements? Can the space be a reason for the emergence of (social) networks, communities, peer-to-peer cooperation and shared ownership? What basic conditions are needed? How much freedom do you give casual passers-by? When is open too open and does it have a paralyzing effect?

What we think and how we think is continuously influenced by how we design the spaces, products and materials with which we come into contact. Is it possible to design a space in such a way that it supports or even accelerates certain socio-societal changes such as new forms of activism, entrepreneurship, citizenship and openness?

By means of concrete cases, Jan Leyssens shows how space influences behavior, to subsequently enter into dialogue with the audience to find out how Timelab should be shaped from its temporal and value framework.

Jan Leyssens is a designer and entrepreneur who is convinced that it is impossible to make a positive story of sustainability if the main focus is on negative impact. As a designer he is always looking for the overlaps between activism and entrepreneurship, technology and society.

* Spatial Series* is a series of debates about architecture as a metaphor for social transformation. About infrastructure as a form of disectonomy of the old standard. About building as an invitation to hackable architecture. The series of lectures takes place i.h. a building project called 33 years of space.

33 years of space is a building protocol for a society on the move. The protocol describes a program that can grow and contract according to relative size.

ABOUT TIMELAB
Timelab is a city lab for new cooperation models. Timelab gives examples of small and big change. These inspire, ask for dialogue and encourage new perspectives. Timelab offers time, space and reflection to artists, designers, makers, scientists and anyone who wants to contribute to a society in motion. Timelab offers an open lab for the development of digital prototypes, co-creation projects, residencies, hands-on open workshops, lectures, debates and a co-working café