On 18/03, Ghent University awards an honorary doctorate to Paul Robbrecht and Hilde Daem. Archipel supports this event by paying tribute to both architects in the form of a visit to six buildings in Ghent with explanations by various protagonists, the day after the awarding of the doctorate. 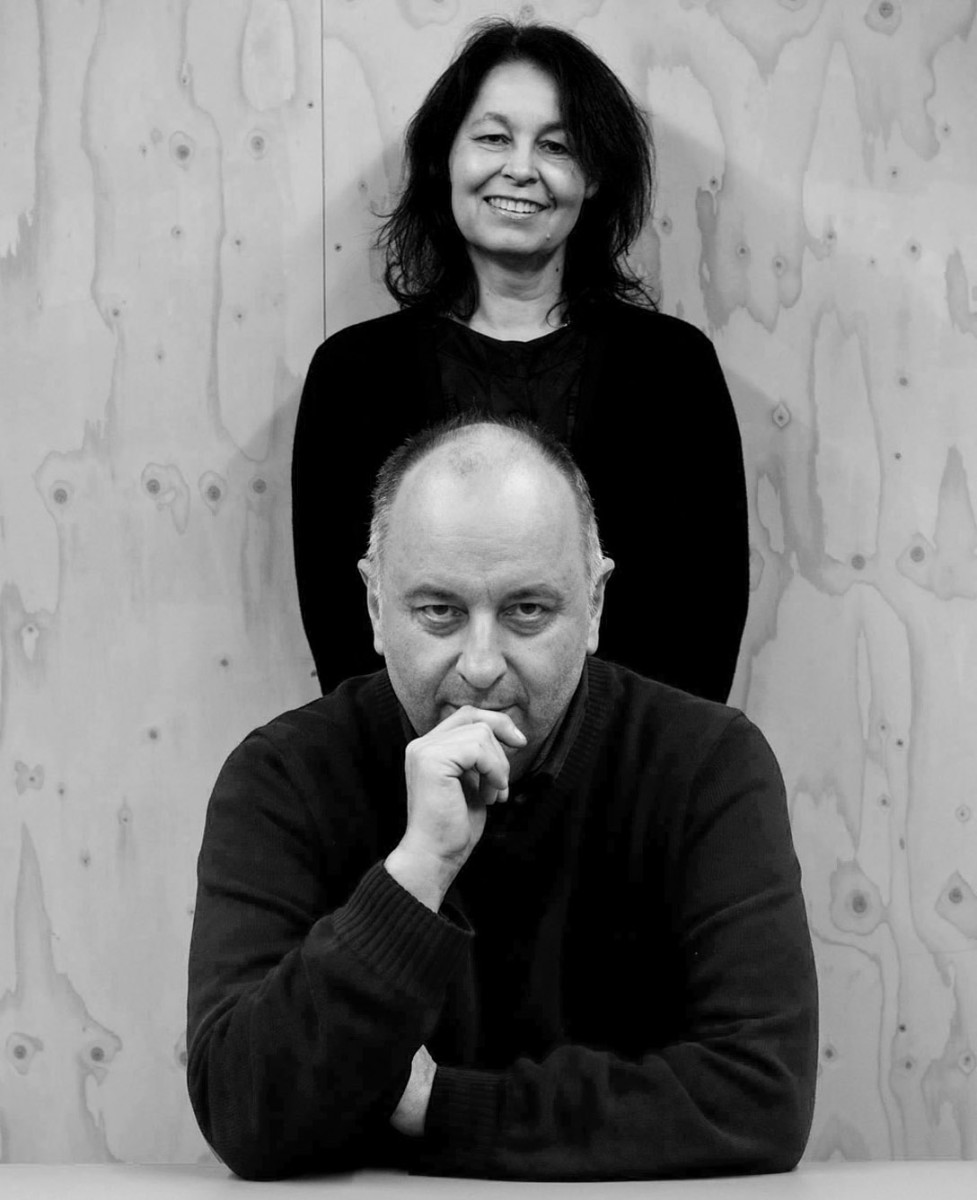 Paul Robbrecht did an internship with Marc Dessauvage and Hilde Daem with Francis Serck. After their internships, they started their own architectural practice together in 1975. Since 2012 they run it together with their son Johannes Robbrecht.

“From a dovecote in the Dutch village of Dorst to the Concert Hall in Bruges, from an art gallery in White Chapel to the Bordeaux City Archives, the body of work that Robbrecht and Daem Architects has worked on since its foundation in 1975 has developed a variety and maturity that stands out on the international stage.”

“It is difficult to shake off the impression that Paul Robbrecht and Hilde Daem have, since their first realisations, carefully and deliberately built up their own oeuvre, in which the relationship between visual art and architecture is central. Yet they always emphasise the subservient role of architecture, which should oblige art and not draw all the attention to itself. The attraction of their work lies in the fact that the realisations never fully reveal their meaning and in the complexity and contradictions that the architects seek out rather than exclude. The artistic character of their work is not so much to do with the – often literal – presence of art, but with the characteristics of architecture itself.”
Dieter Declercq 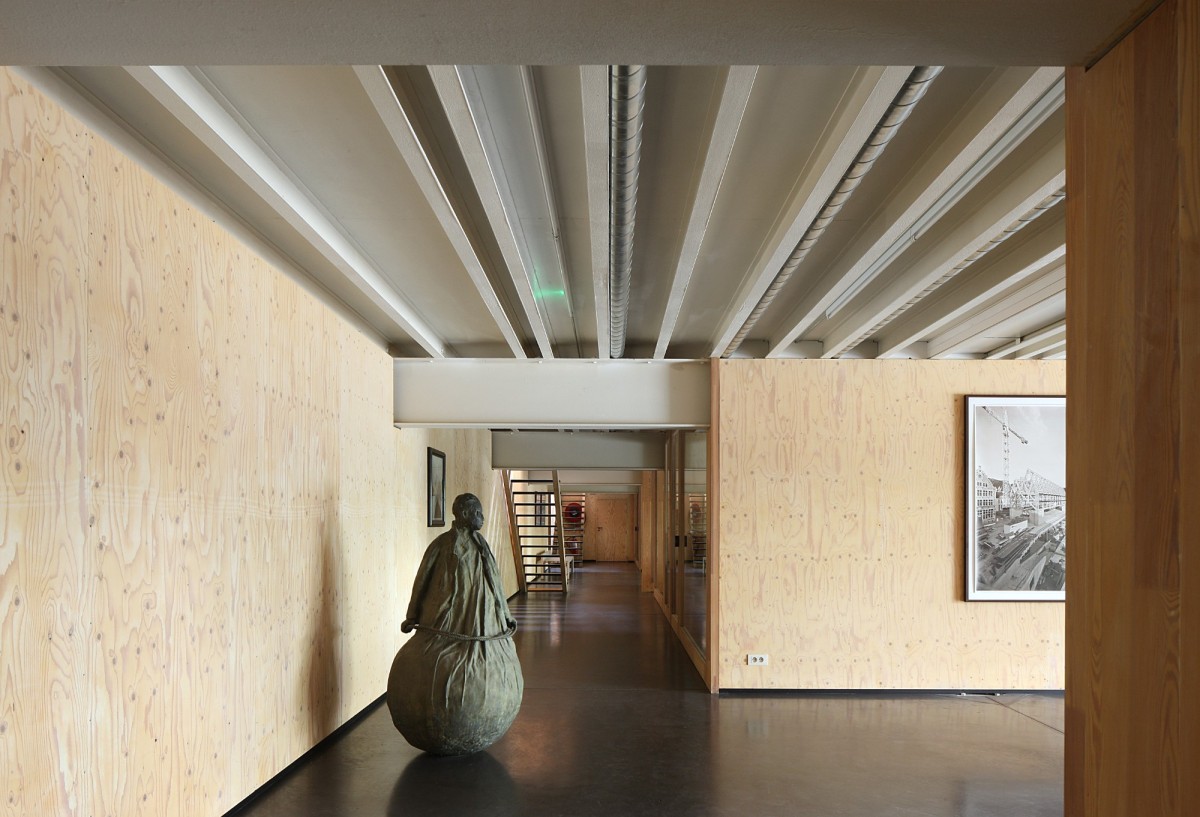 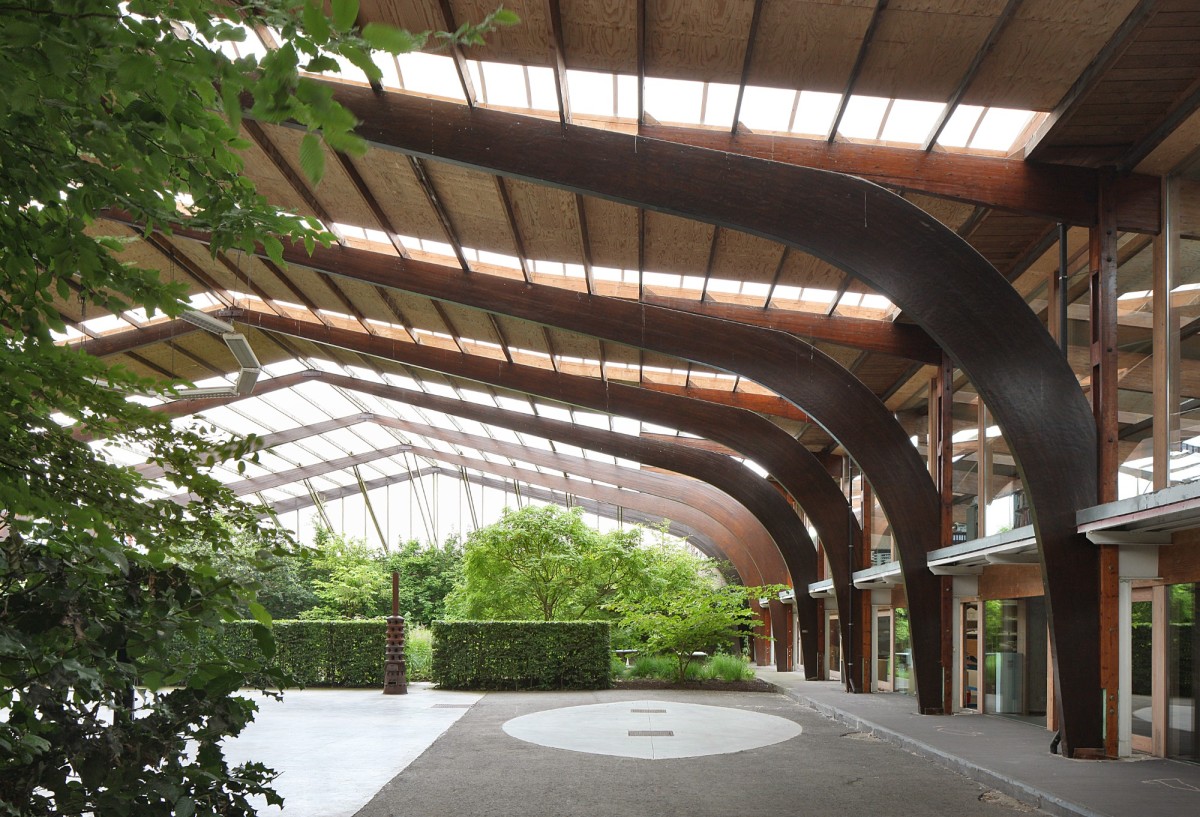 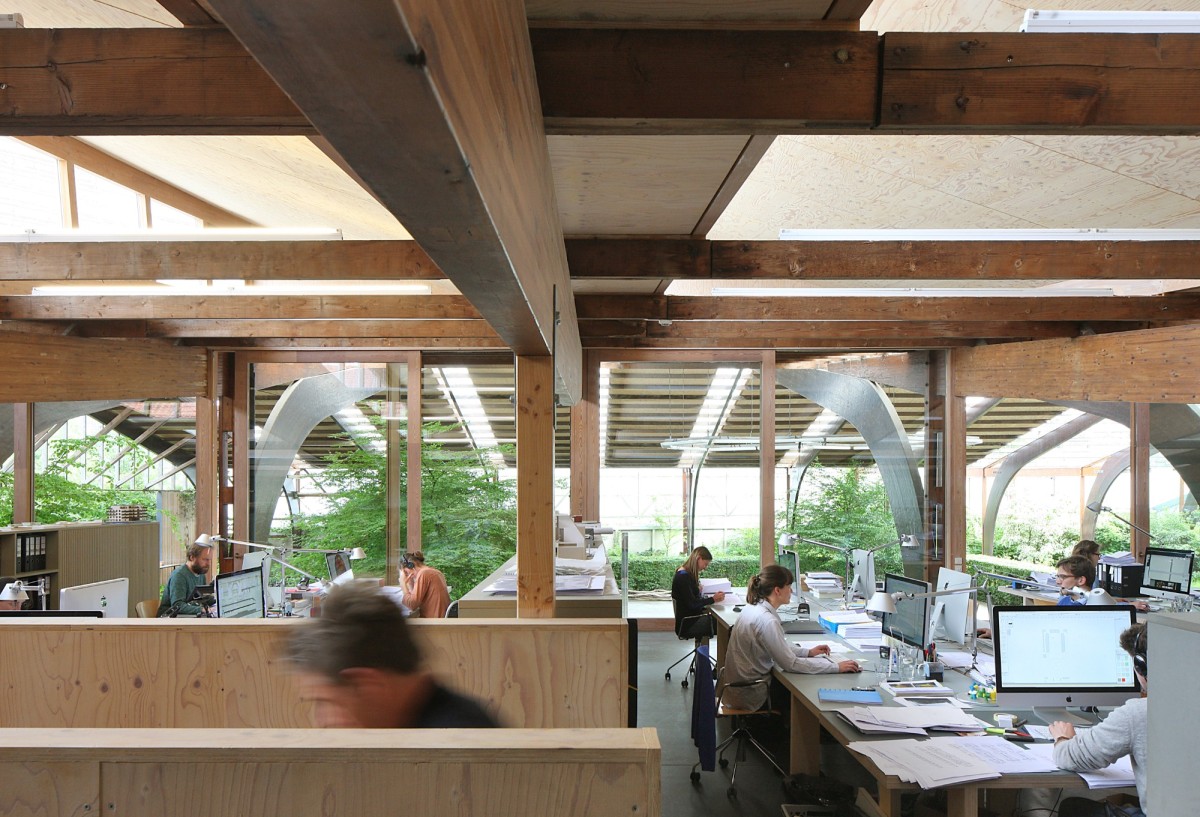 “In an impoverished part of Ghent, against the background of nearby blocks of high-rise flats, Robbrecht and Daem have converted an existing timber yard into new architectural studios. The roof of the shed, built by the wood construction company De Coene in the early seventies, has been partly dismantled.
The workfloor has become an outdoor space that will accommodate an arboretum, a swimming pool and a large open area for performances.” 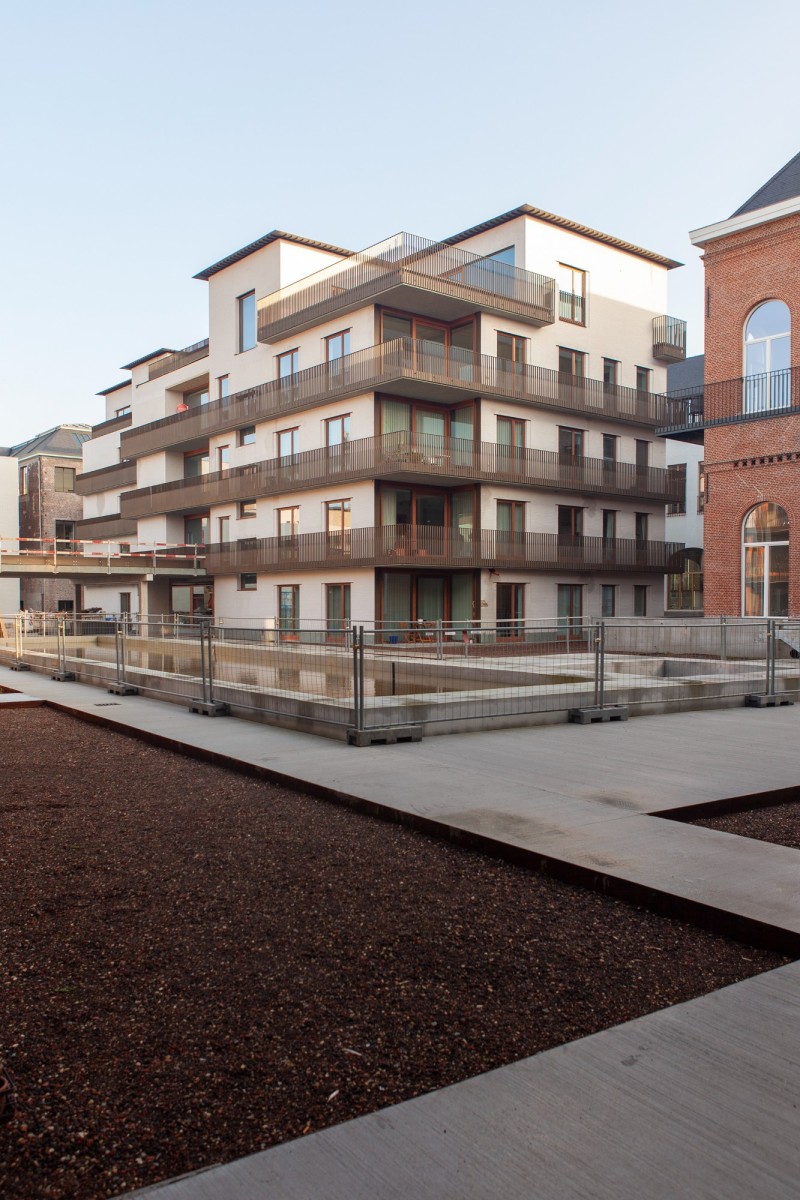 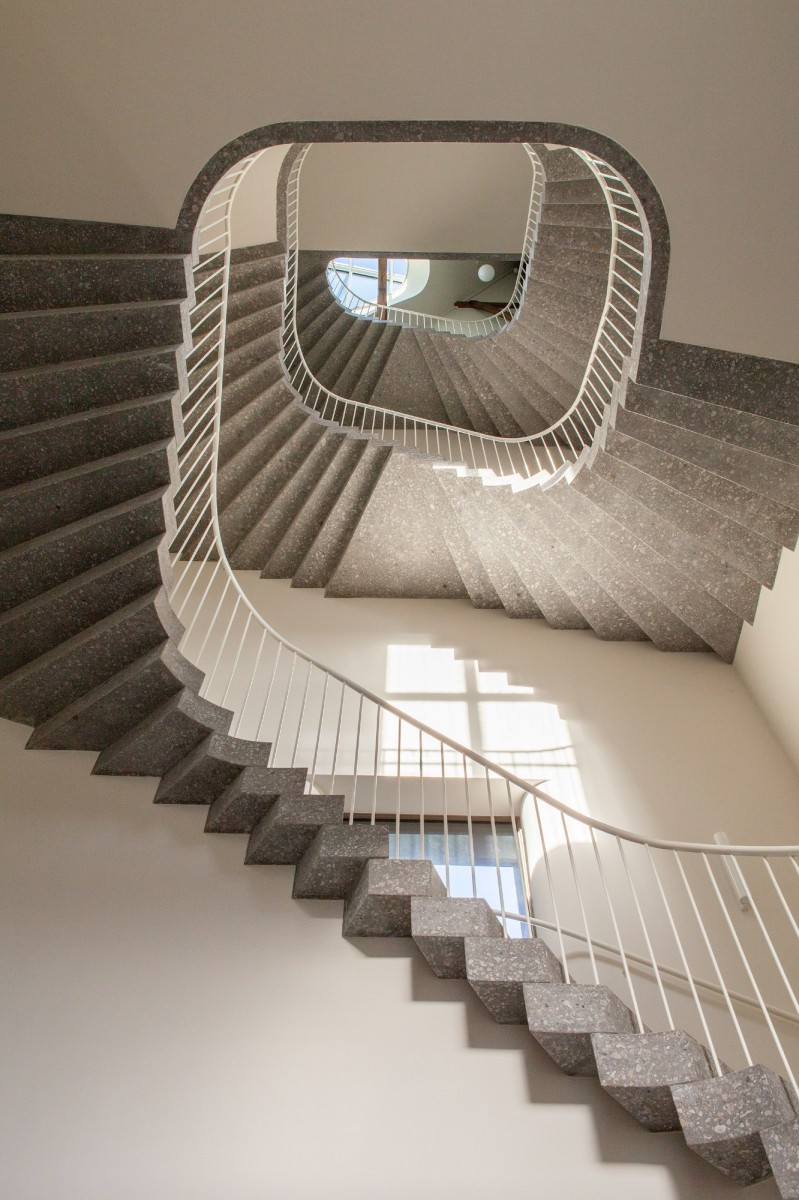 
“The project involves the redevelopment of an inner-city block in the centre of Ghent to provide ninety residential units, some new-build and others partially housed in the protected monuments of the former Royal Academy of Fine Arts and fire station. These existing buildings flank a new semi-public interior street that serves as the backbone for the redevelopment of the entire block. The interior walkway connects with two new apartment buildings located in the inner court that are embedded in a complex of public and private gardens, and surrounded by new volumes which complete the block on Molenaarstraat, Brandweerstraat and Sint-Margrietstraat.
All buildings are connected underground by car parking. The provision of some commercial functions (convenience store, restaurants, offices, …) complements the residential program.” 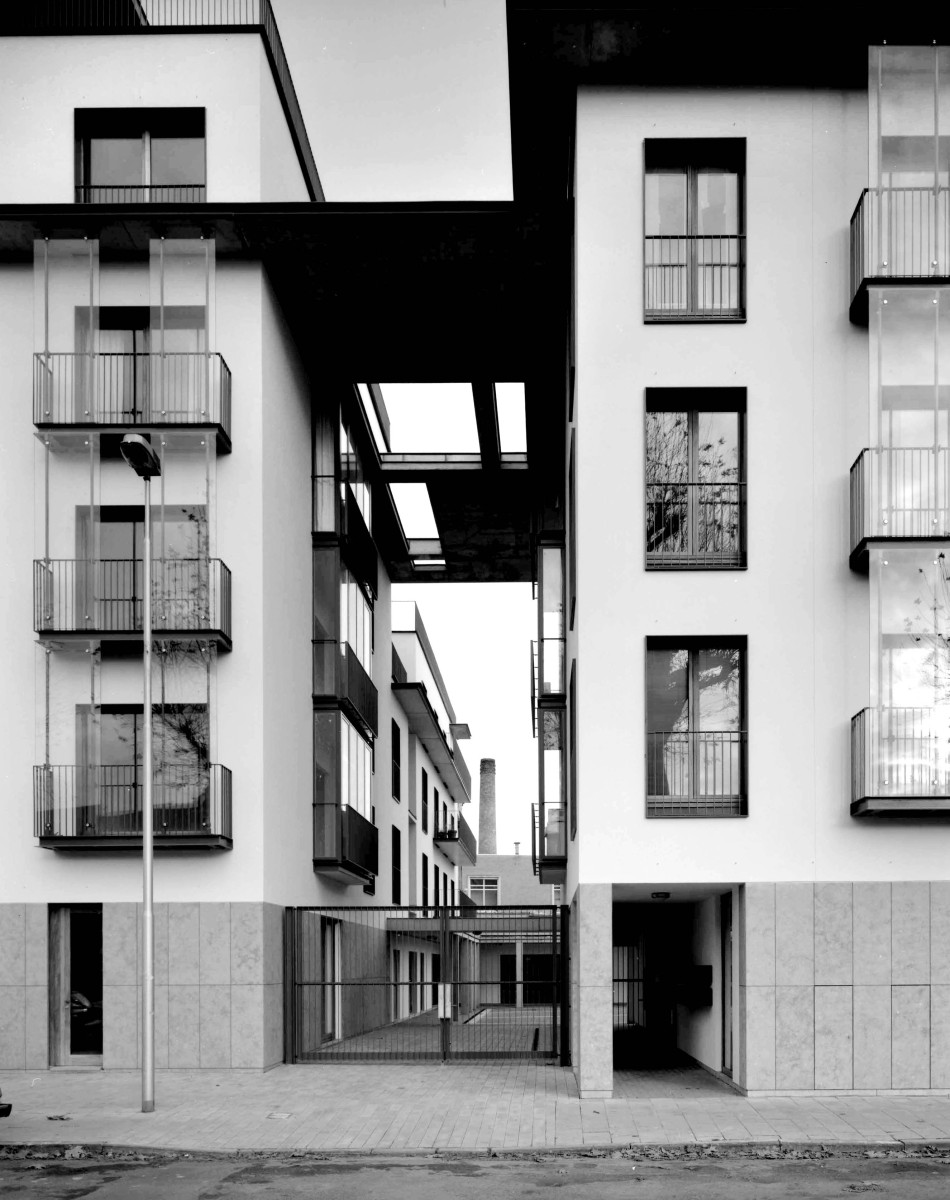 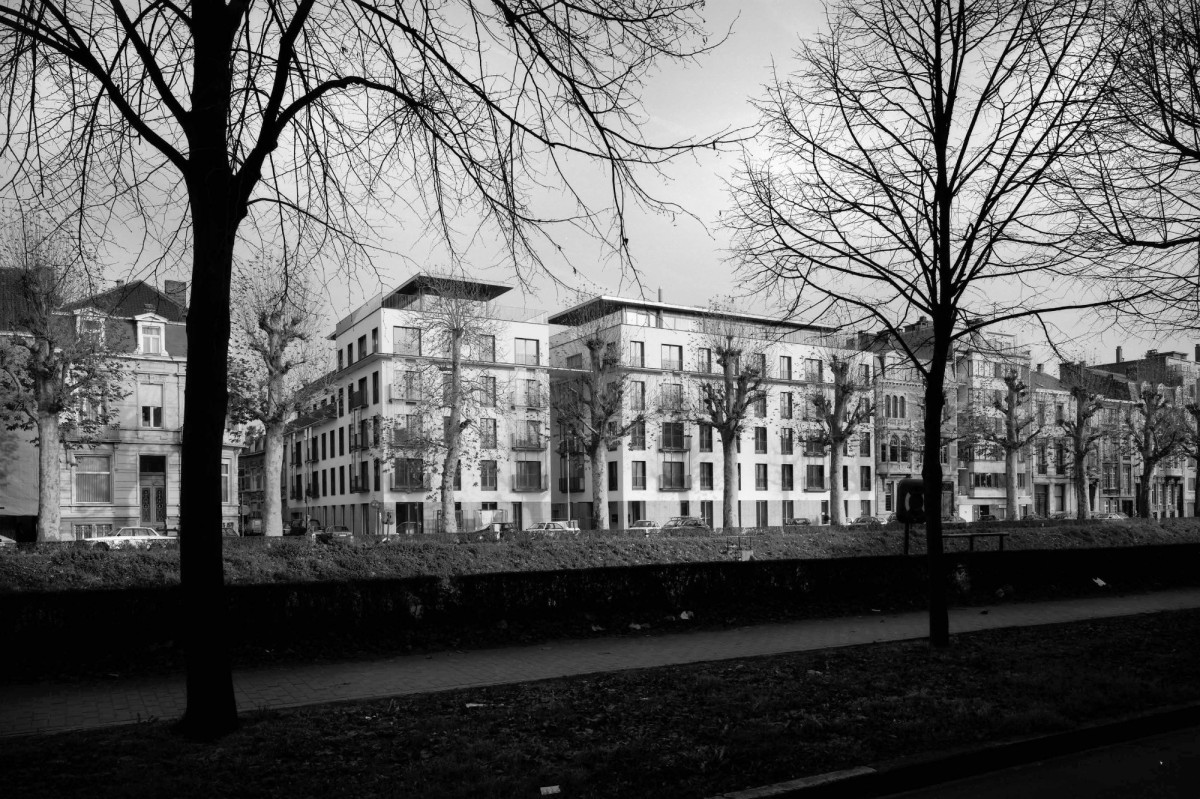 
Residential complex along the Coupure, which is harmoniously integrated into the street scene by its vertical window arrangement. The classical articulation of the whole is attuned to the surrounding buildings. The residential units, above a public plinth, are organised around a spacious courtyard. 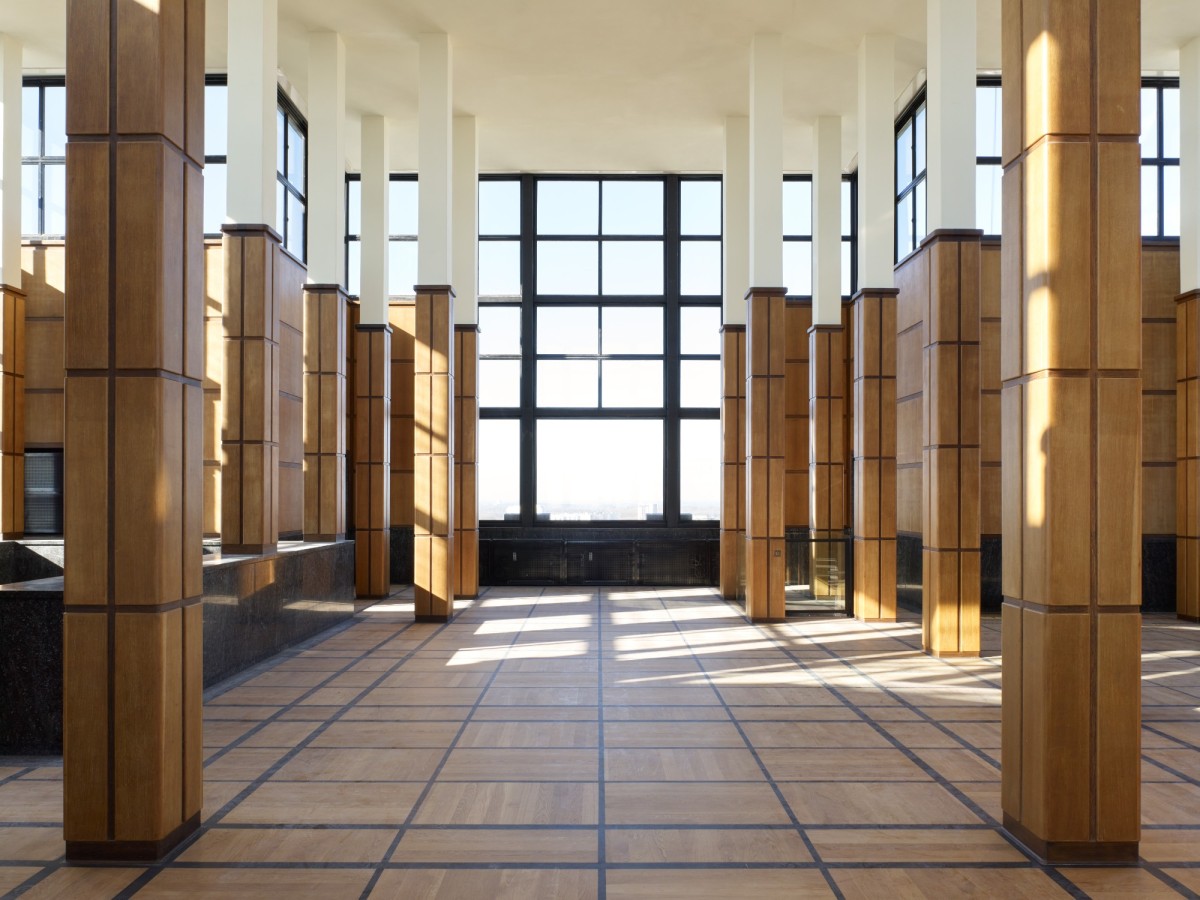 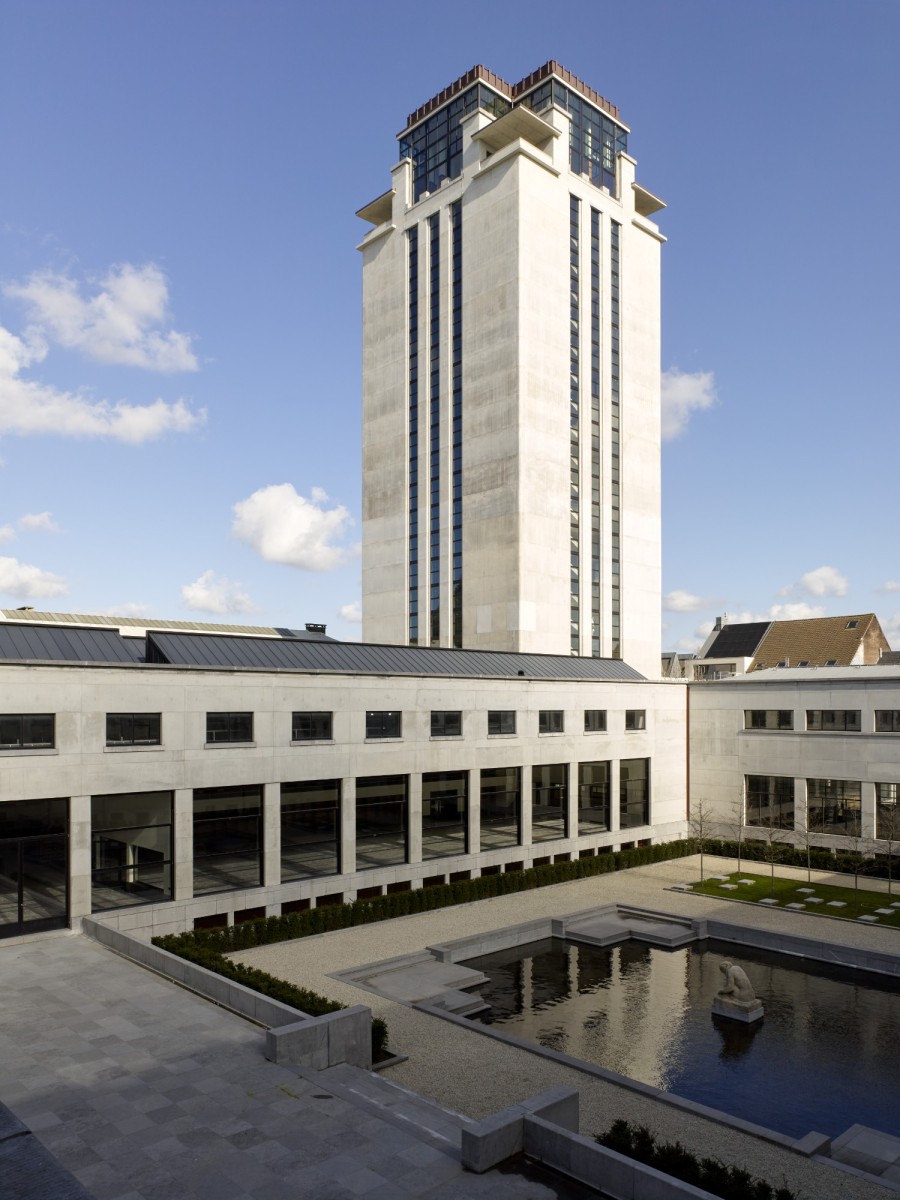 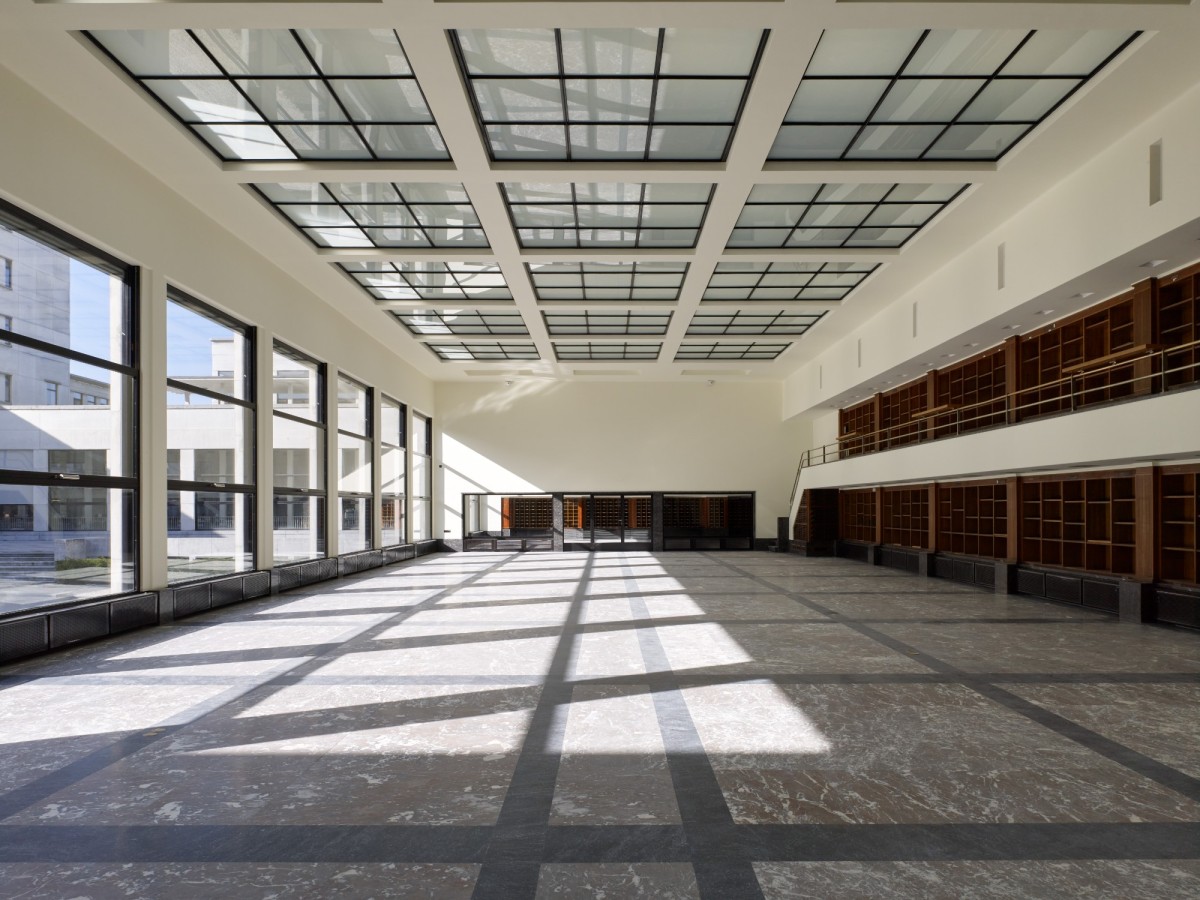 
“The Central Library of Ghent University, designed by Henry van de Velde in the 1930s, is being restored and geared to the current requirements of library use and conservation. To this end, an entrance will be built next to the HIKO, which is part of the original complex, that will generate a new sequence of spaces around the inner garden. This includes among other things a café/reading room, a canopied terrace (which Van de Velde had actually designed) and workspaces for handling digital data individually or in groups. Together with the necessary technical modifications, and making the observation room at the top of the tower fully accessible, this clear-up will restore the building’s dignity as a place for study and reading.” 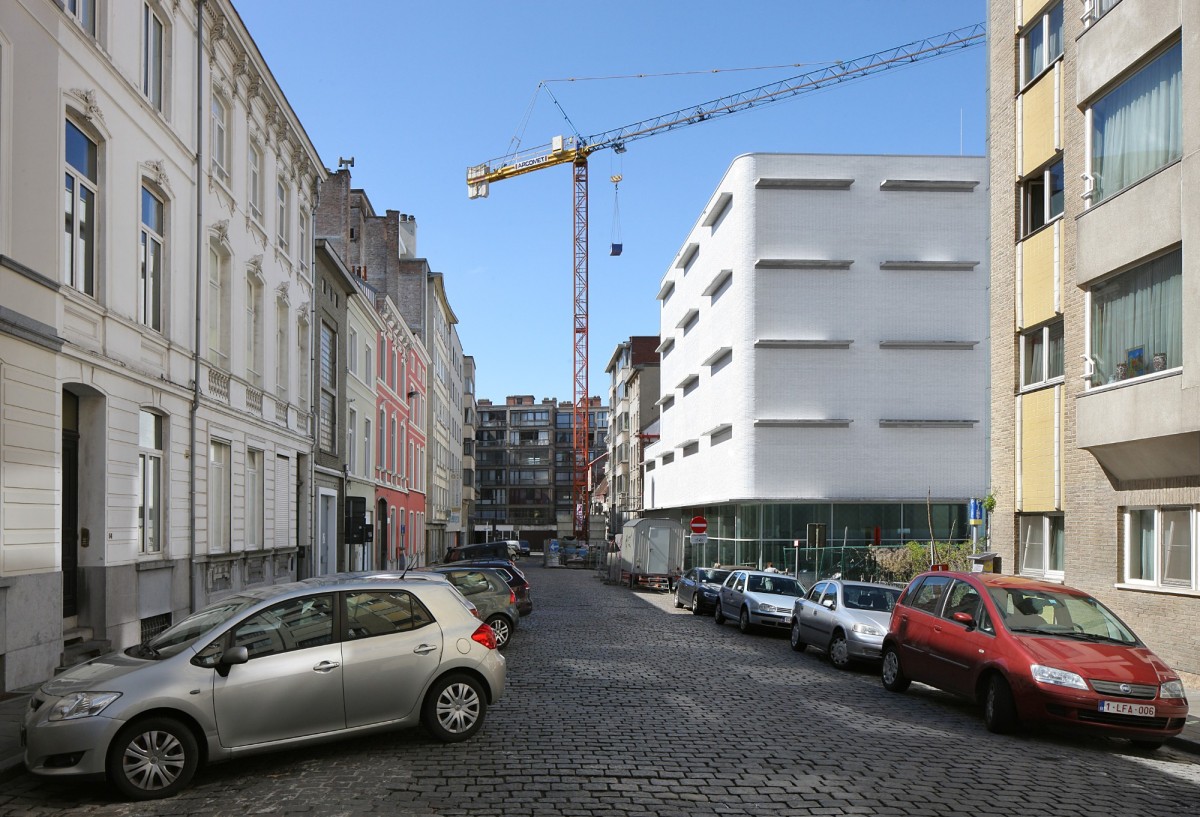 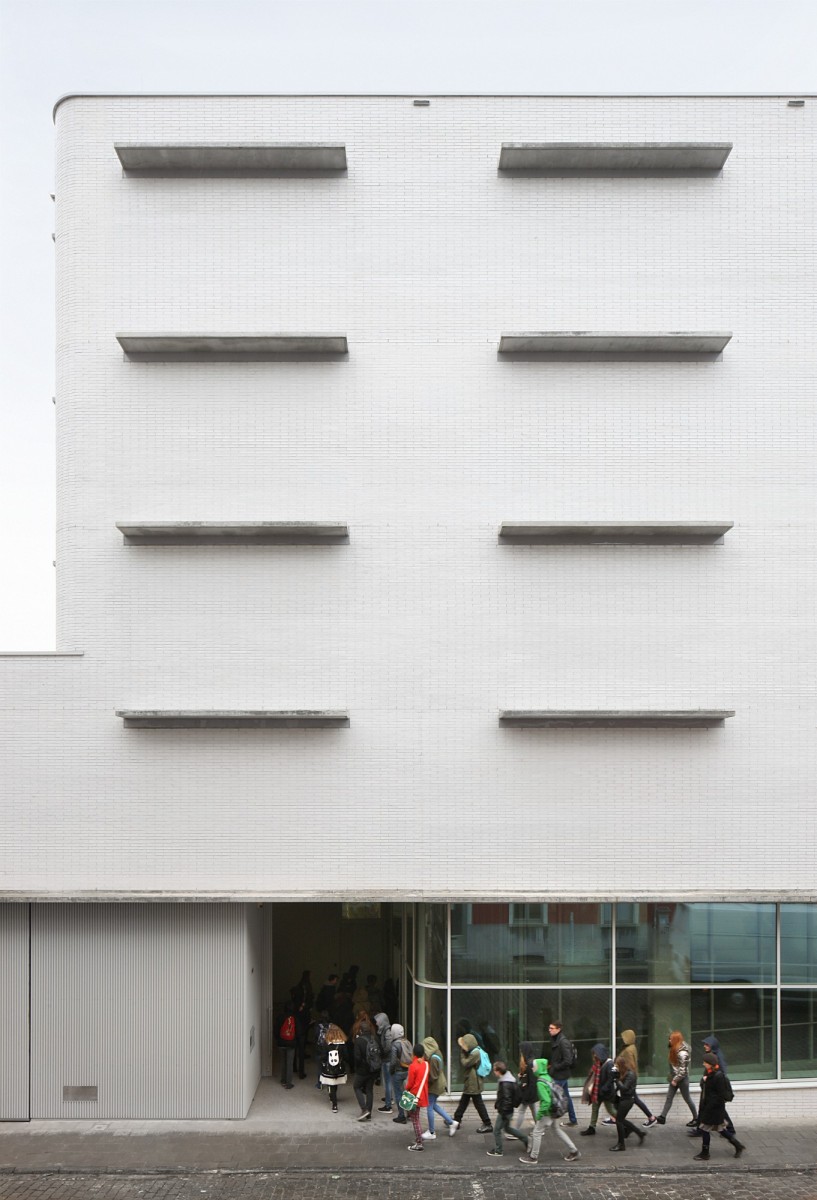 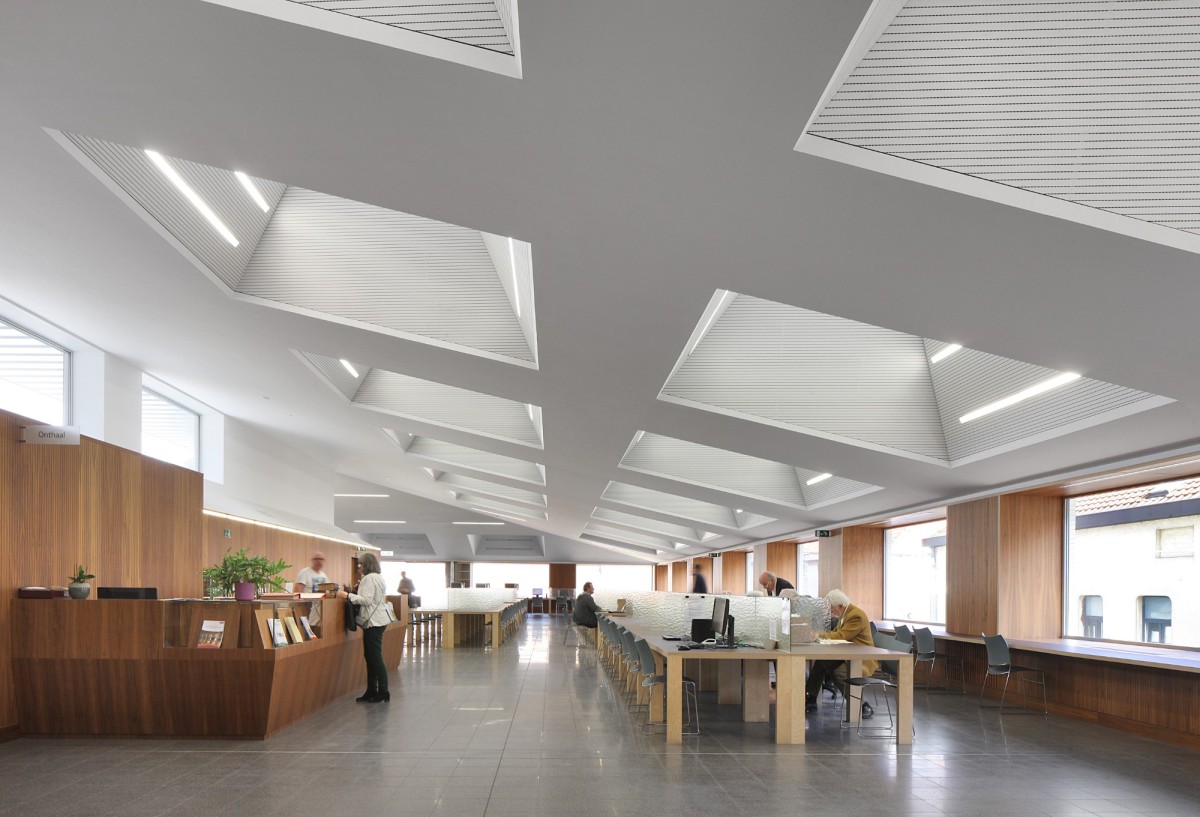 
“The new volume is meticulously matched to the scale of the surrounding buildings. This sturdy corner building keeps to the pattern of the street onto which it fronts, while the volume behind adheres to the cornice height of the surrounding streets and alleys. The glazed entrance is extended into a continuous transparent horizontal band that wraps around the building. Part of the archive is housed underground. This makes space available for a small public square at the back, in the midst of this dense 19th-century urban setting.” 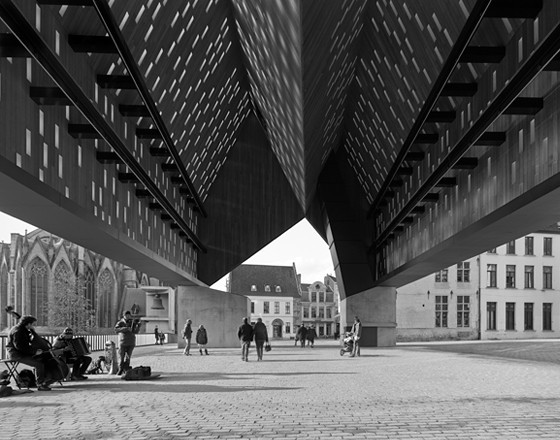 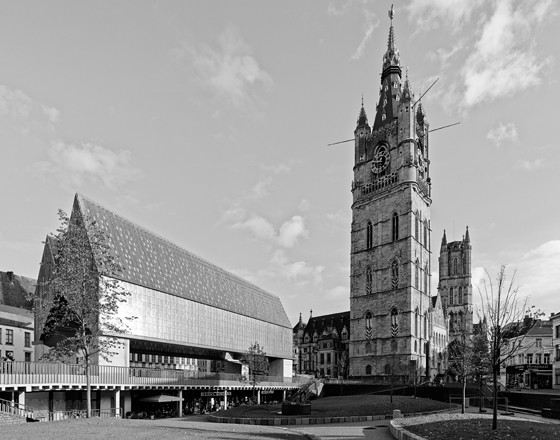 
“Following two demolition campaigns for a world exhibition in 1913 and an administrative centre never built in the 60s, Ghent’s historic heart degenerated for decades into a desolate parking lot in between a suite of three adjoining Gothic towers. In two consecutive competitions between 1996 and 2005, Robbrecht en Daem architecten and Marie-José Van Hee architects proposed their own programme, countering the initial competition requirement. Rather than just providing an open space for events, they sought, by meticulously positioning a market hall, to rectify this deficiency and reinstate the presence of old urban areas that had become unrecognisable.

The building positions itself between Poeljemarkt, Goudenleeuwplein, and a new lower ‘green’ connecting to the ‘brasserie’, bicycle park and public toilets below the hall. And although the building clearly occupies a position on the 24,000m2 site, it fits in well. Compared to St. Nicholas Church, Belfry and Cathedral, it assumes the heights of a lower group of buildings such as the adjacent town hall, from which it derives, mathematically, its profile.”

Members will be given priority when registering!

We plan to have three groups of max. 35 people. The groups will leave consecutively with 45 minutes in between each group.
The first group leaves at 9.30 am.
Starting point at the Robbrecht & Daem office.
End point first group at ± 16h15 at the City Hall.