Together with the organisation BLIKVELD, we take you along fascinating places in Ghent. Ghent presents itself as the cycling city of Flanders. Along green routes, we dive into one public, scenic project after another. 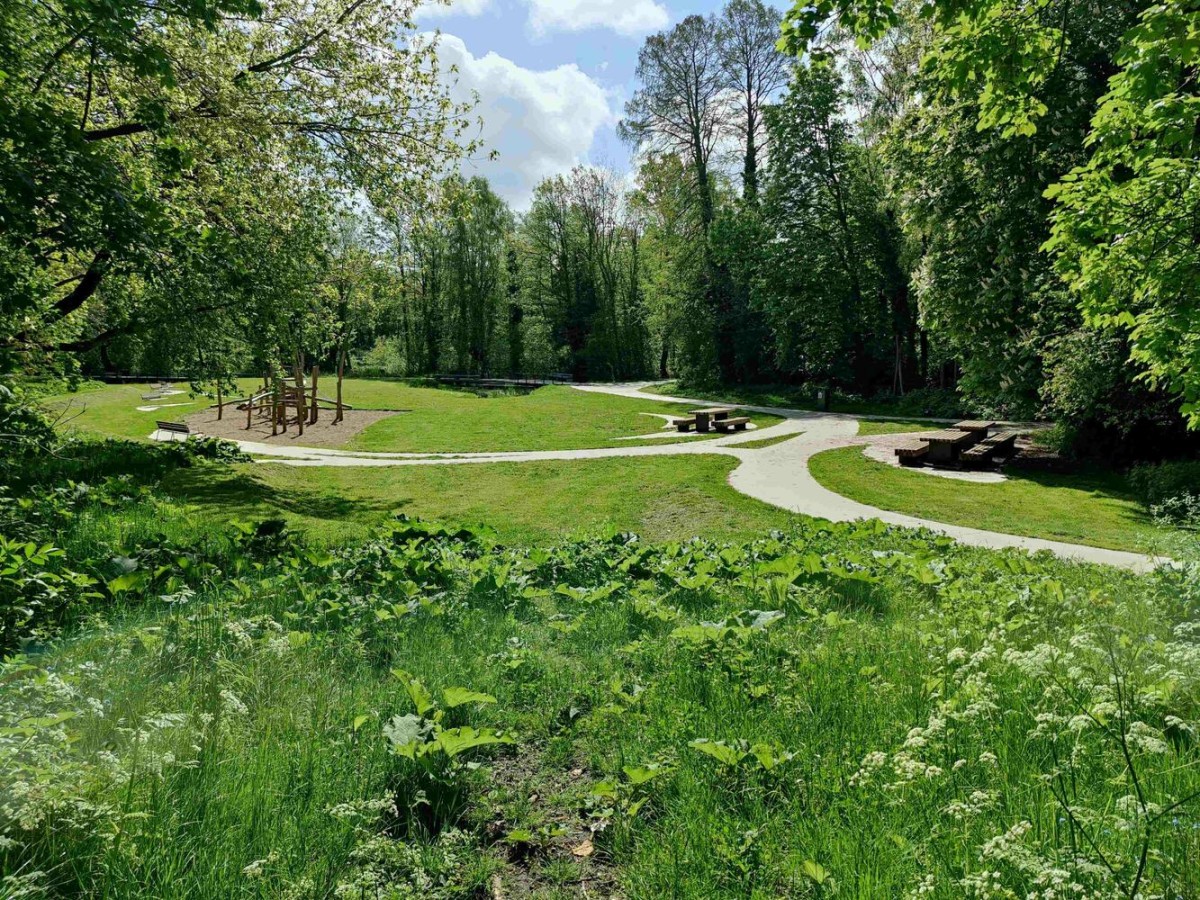 Never before has the relevance and urgency for quality landscape and garden architecture been so high. To provide answers to the challenges linked to urbanisation, natural degradation, climate change, health and energy supply, there is a growing need for designers who embrace the interests and qualities of our natural environment. Under the influence of this urgency, further emancipation and professionalisation of landscape and garden architecture is necessary. The diversity and complexity of projects is increasing and requires more and more knowledge and experience. This also means that the profession, in all its sections, must further respond to this evolution. The professional activities, the protagonists, the rich history and the relevance of landscape and garden architecture deserve a higher visibility and a voice in the social debate. We should actively work towards a renewal of our ‘landscape culture’ with a stronger landscape awareness among a broad public.

The bicycle tour is organised together with BLIKVELD, guided by Ruben Joye, Luk Vanmaele and Hans Druart.
BLIKVELD vzw is the new professional association that unites professionals, associations, institutes and all stakeholders in the world of landscape and garden architecture. BLIKVELD vzw is a collaboration between the Dutch-language operation of the Belgian Professional Association of Landscape Architects and Kubiekeruimte vzw.

BLIKVELD came about thanks to an intensive process involving both associations and various professionals from the broad field of work. Starting from the various social needs that exist in our living environment and the expertise of the professionals, the mission, vision and objectives were formulated and made concrete.

Their ambition is to contribute to a vibrant professional field and to help build a durable, future-oriented and ambitious living environment in Flanders, Brussels and beyond.
“BLIKVELD vzw wants to be a meeting place, a beacon and a pillar of support. An arena for creative manoeuvres, professional support and inspiring exchanges on landscape and garden architecture”. 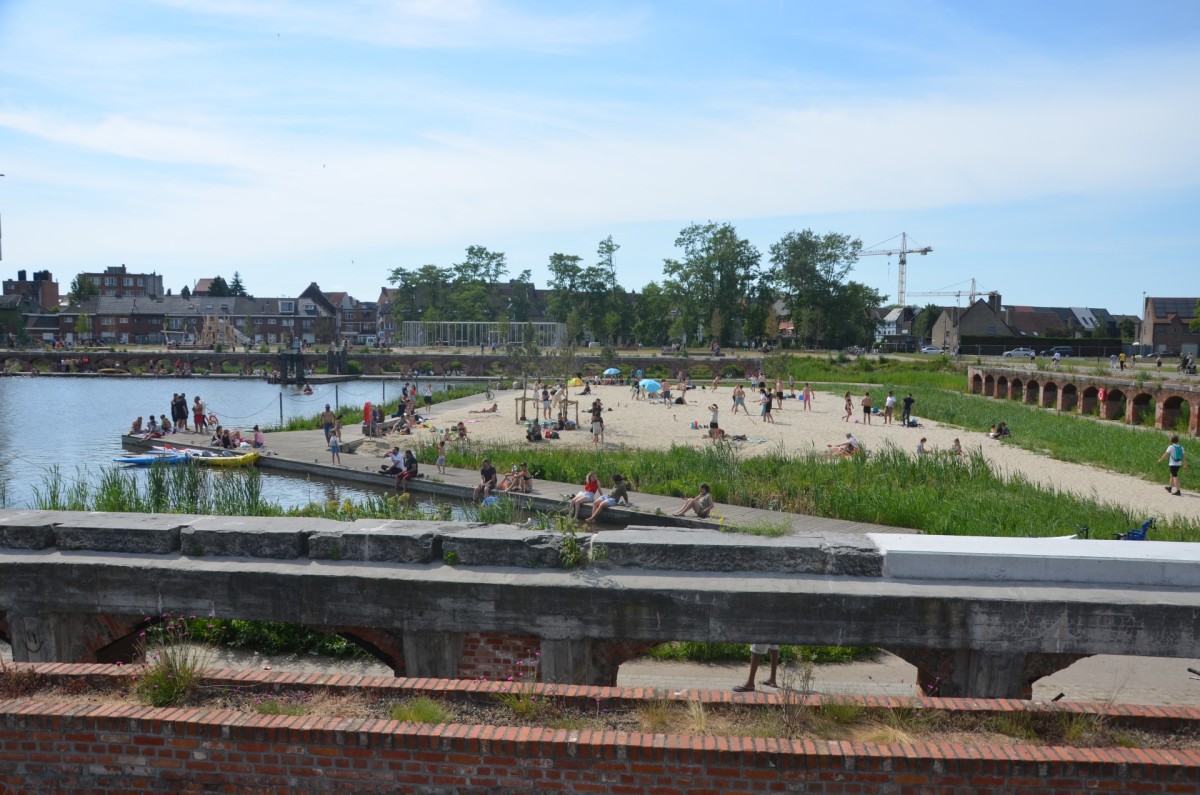 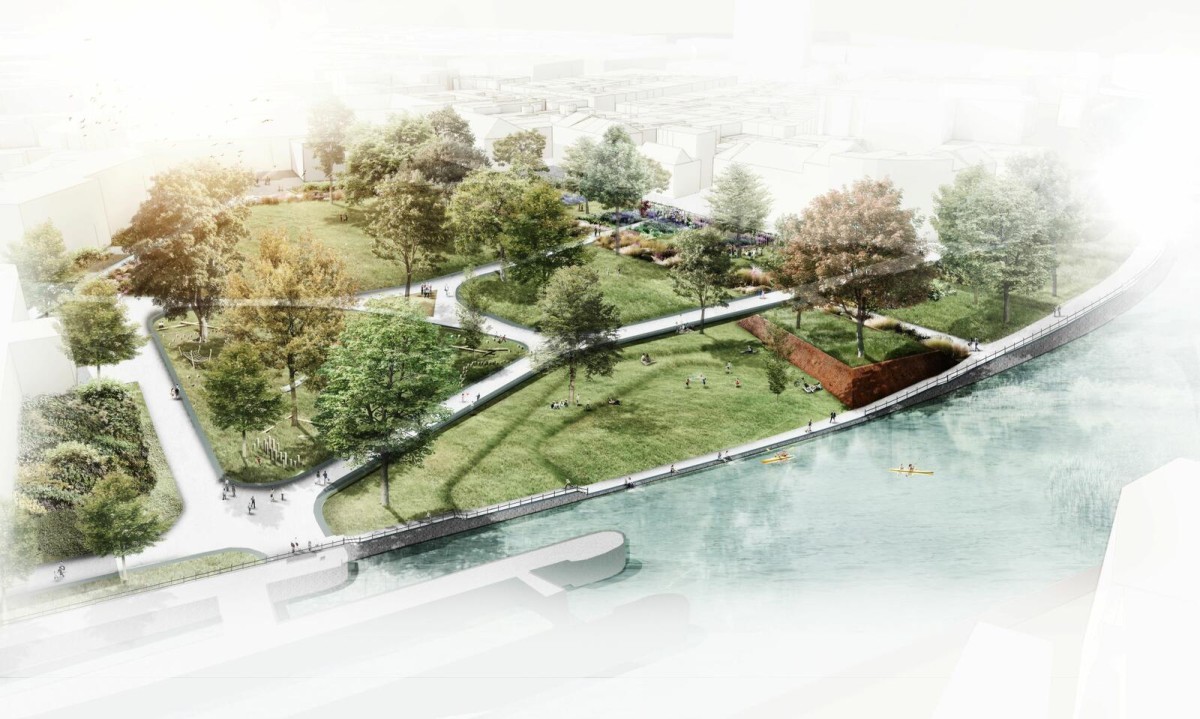 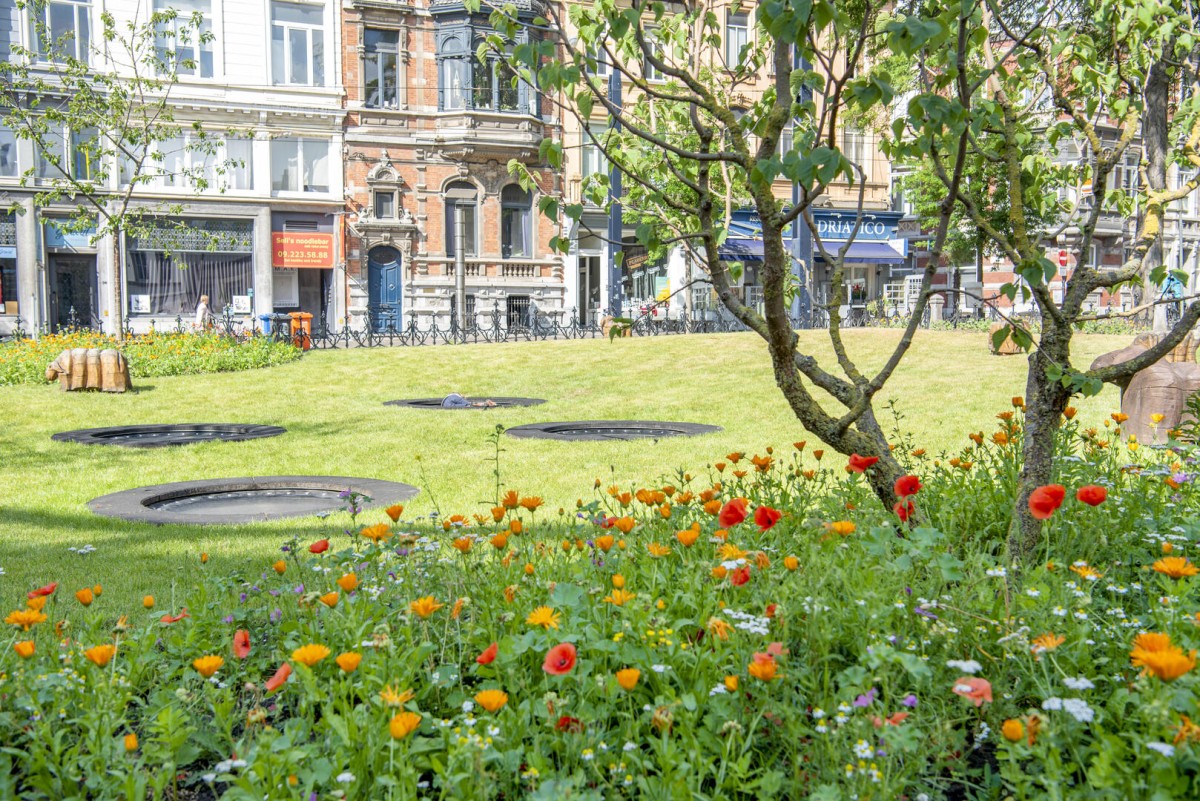 
Kapitein Zeppospark
The new neighbourhood park around Houtdok is part of the larger green structure within the Oude Dokken project, a new district on a historical industrial dock site where old and new Ghent citizens can live, work and recreate around the water and and in a green environment. The green structure within this project consists of three neighbourhood parks (Achterdok, Handelsdok-oost and Houtdok) and of smaller zones of greenery in the building blocks. The Houtdok site is notable for its quay walls and arches dating from 1880. Cargoes of mainly Scandinavian wood were transshipped here, stored on the quay and transported inland by train. With the disappearance of the industry, the site fell into disrepair. In 2014, the City of Ghent started drawing up a design for the Kapitein Zeppospark. In 2019, the site was transformed into a 3.2 ha neighbourhood park for the adjacent district of Muide-Meulestede and the new residents within the Oude dokken project.

Baudelopark
Baudelopark is an important green space in the centre of Ghent. The revaluation of the former abbey garden and especially the merging of the two parts of the park are improving the quality of the living environment in the city. In 2012, the Antwerp bureau OMGEVING won the design competition and started work on the ‘reunification’ of the Baudelohof.
Landscape architect Peter Swyngedauw drew up a new plan under the guidance of the city’s green services department. The park was extended into the surrounding streets and the road from the Sint-Joriskaai to Minnemeers disappeared. As a result, the park once again runs to the quay, as it once did. The quay itself has also been lowered. When drawing up the preliminary design for the Baudelohof, maximum consideration was given to the existing stock of monumental trees. A new wide strip of flowering herbaceous plants, which refers to the historical canals of 1619, is a new eye-catcher and frames the new park. New park paths delineate stylised large areas of grass which have various gradients in order to compensate for differences in relief. The relief differences create stepped, comfortable seating edges along the paths and along the quay at the Leie.

Maaseikplein
Maaseikplein is located in the Ghent city centre next to Sint-Baafskathedraal. In 1905, a meticulously maintained courtyard with exotic plants was built here for the first time. When King Car reigned in the 1980s, a large part of the original park was paved to make way for parking spaces. After the introduction of the Circulation Plan, the car park was transformed into a square with picnic benches and wooden play sculptures. When the Gent Environmental Department was looking for areas to soften, the idea for Fruitgaard XL was born in collaboration with the Groendienst.
The park is a bridge to the Mystic Lamb, which inspired the planting. Just like in the painting, we find an almond tree and mulberry. The designer also drew his inspiration from the Van Eyck brothers for the herb mixes that were sown in the various borders. In summer, the park is a flower field of yarrow, chesnip, prickly pear, marigold and woodruff; all indigenous plants that are very popular with insects. Fruit-bearing plants could not be lacking in the renewed fruit orchard. Thus the park became a real XL orchard with redcurrant, apple, pear and plum varieties. 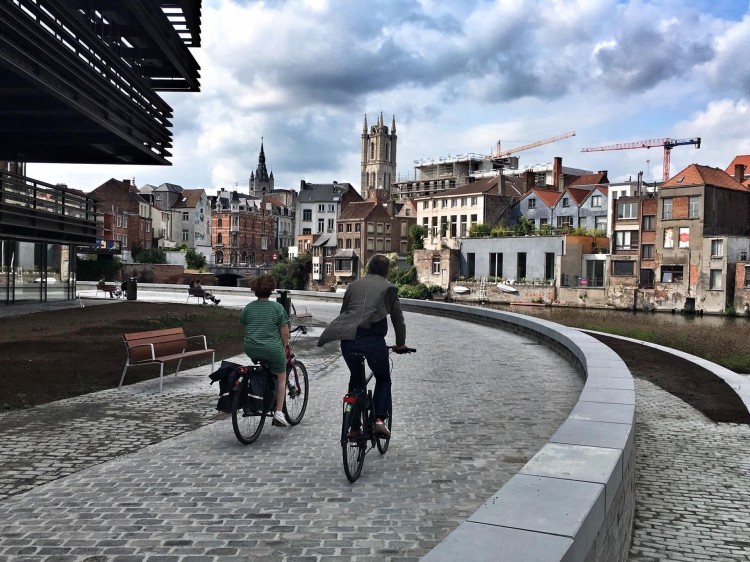 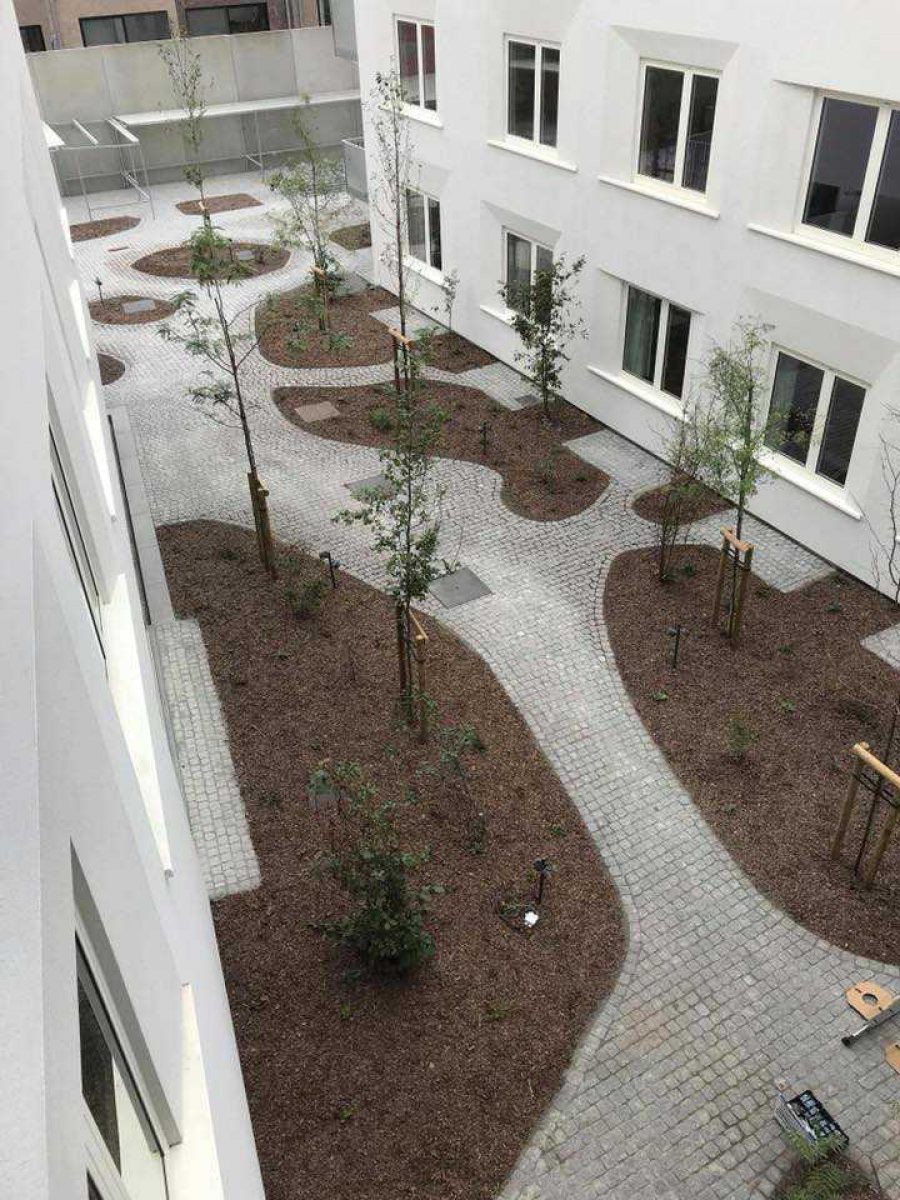 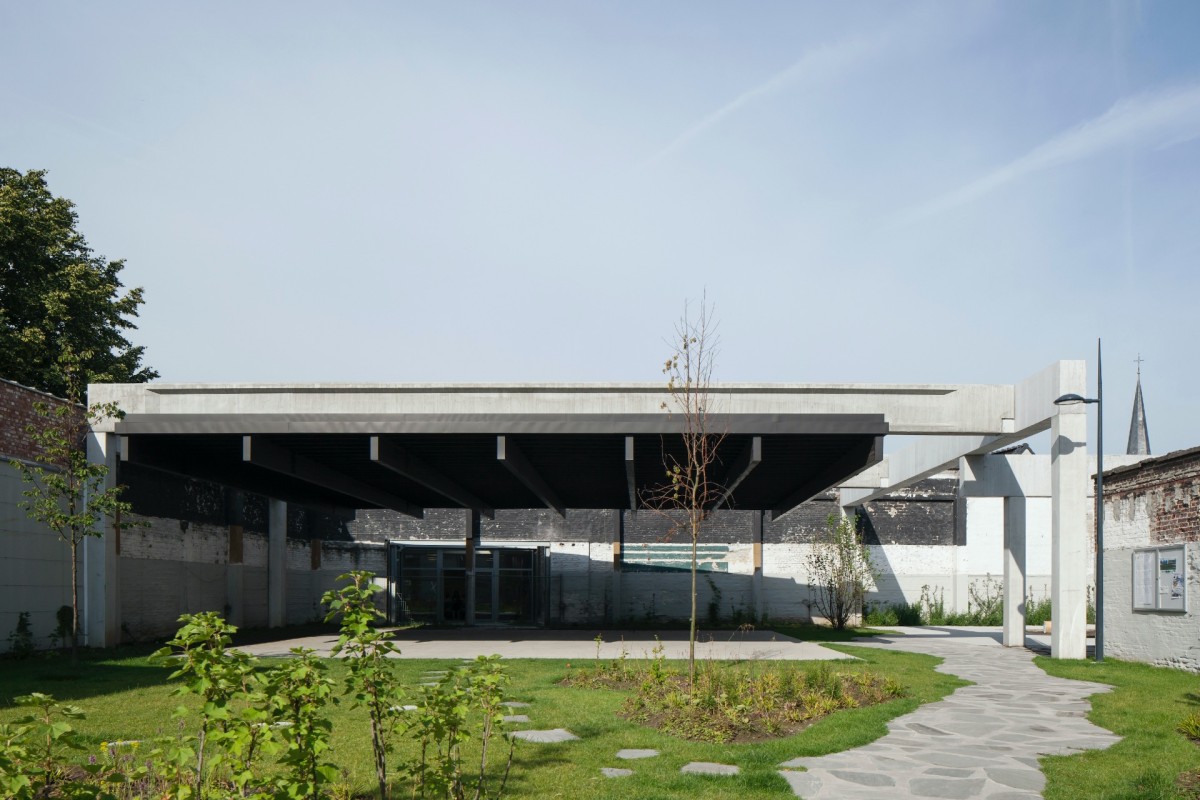 
Omgeving De Krook
The quay has been lowered, the city bank at the big bend is divided into several “shells” that slide over each other and form a rock on which the erosion lines can be clearly seen. The slopes also underline the natural character of the river. They form a link with the new walking and cycling routes as an undulating movement that follows the water. Between the north side of the new library and the bend in the Scheldt river, an urban quay has been created, partly covered with grass and a few trees.

Ganda Upkot
In Hortus Ganda, Studio Basta is looking for a green living environment for students. They avoid rear sides, subtly integrate functional needs and provide a customised programme for students. The necessary firebreak becomes a green corridor where students meet. There is room for a private terrace, hammocks, sitting blocks, a fire pit and a basketball court. Each student room has a view of a green outdoor space. The plants reconcile context with building. 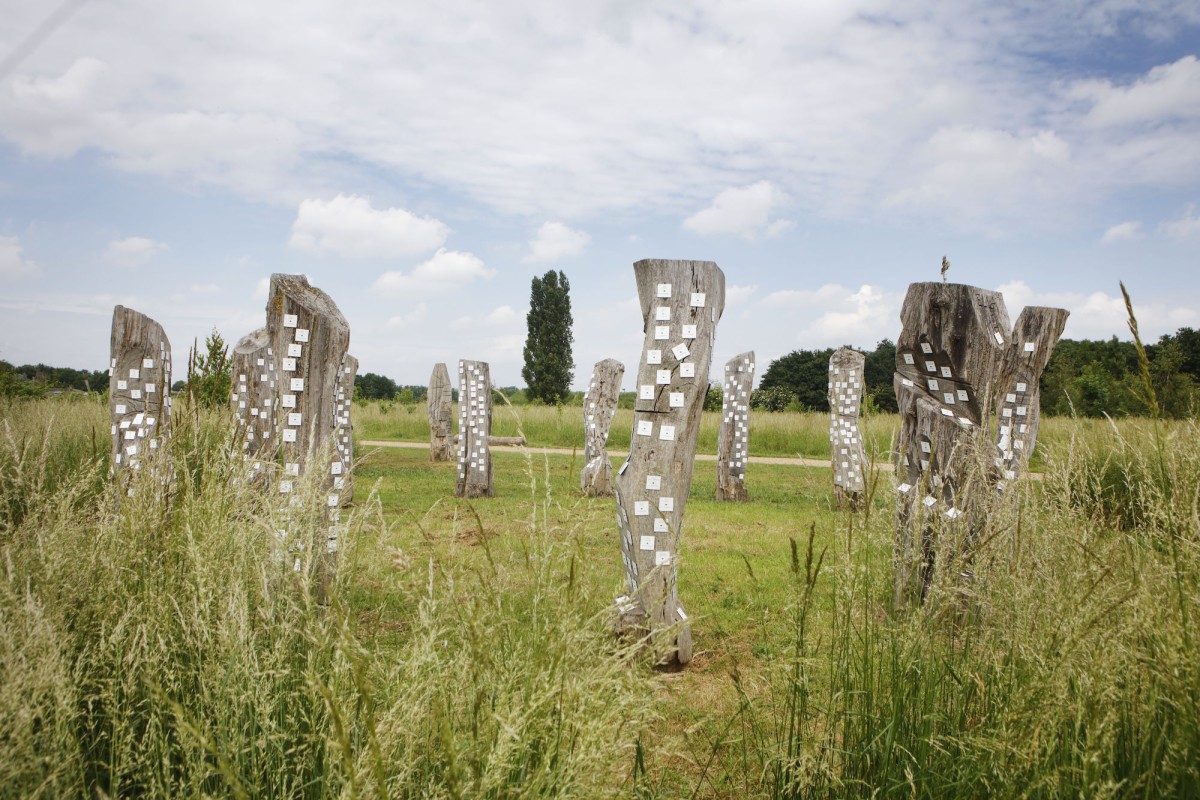 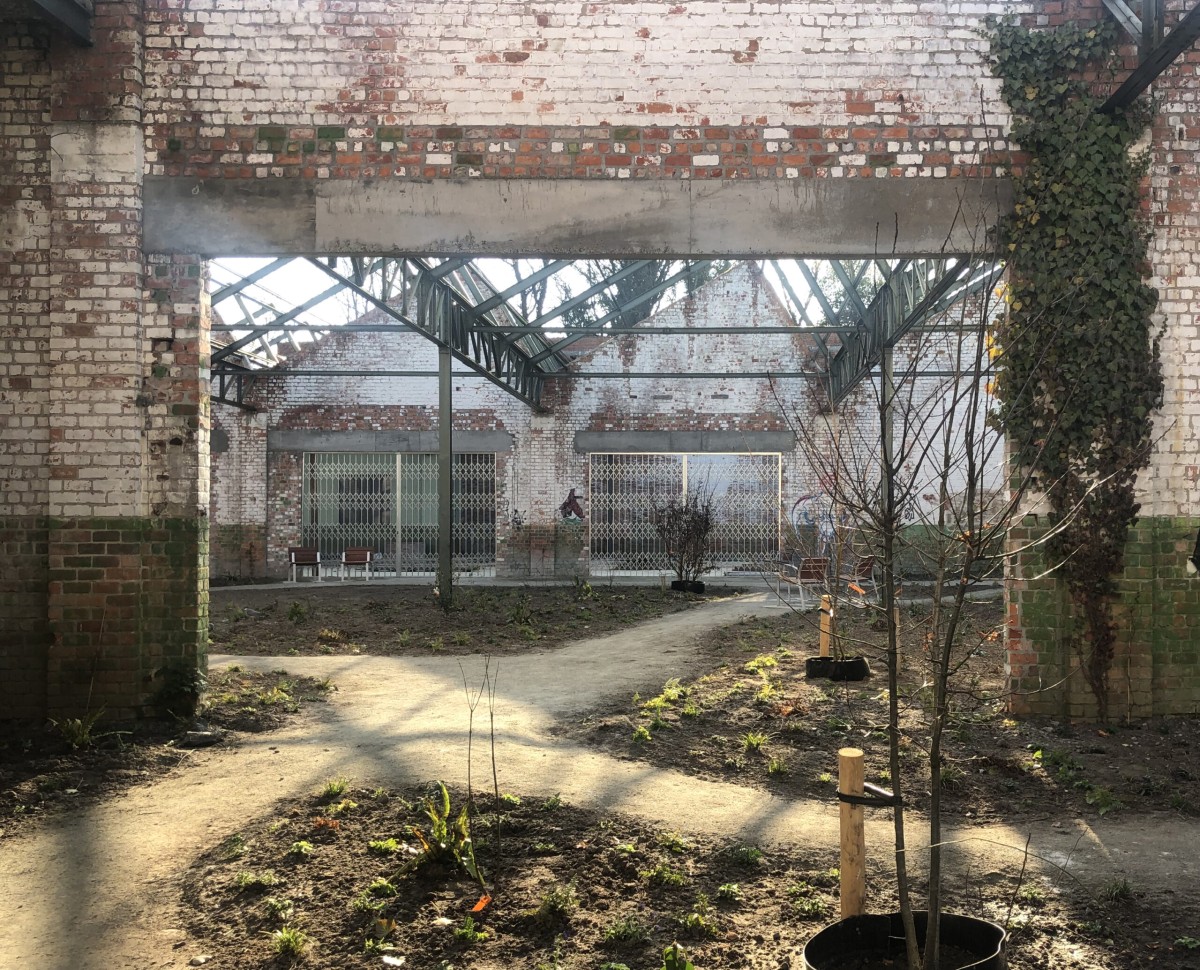 
Park De Vijvers Ledeberg
With its almost five hectares, park De Vijvers is the biggest green lung in Ledeberg. The park is a former castle domain. Although park De Vijvers is quite large, it was not used very much. That is why the park was renovated as part of the urban renewal project Ledeberg leeft. What is special about the reconstruction is that the De Vijvers residential and care centre and a site belonging to the Roads and Traffic Department south of De Naeyerdreef were also involved. Now you can walk straight into the park from the garden of De Vijvers residential and care centre.

Gentbrugse Meersen
In the Gentbrugse Meersen, a large green lung close to the city, a lot has been invested in recent years. A patchwork of smaller green areas, former farmland and residual spaces has been turned into a diverse and attractive green pool. There is also a native forest. The Gentbrugse Meersen is a 270 ha large open area south-east of Ghent. Natuurpunt and the City of Ghent are working together here to create a nature core with room for play nature. It lies between the built-up areas of Gentbrugge and the wide river Scheldt bend that marks the beginning of the Zeeschelde. Together with the Damvallei in Destelbergen, the area forms a large green spot of 650 hectares near Ghent.

Enlargement Bijgaardepark Gent
The former Malmar factory is being transformed into a public park and cohousing. Years of vacancy have created an ideal biotope for some rare species of fern, a unique colony of bats and works of art by Roa. Part of the buildings have been taken over by the neighbourhood for vegetable gardens. The plan brings the industrial character of the site with its brick walls and trusses, the unique biotope of ferns, bats, graffiti and communal gardens into synergy with the new use of the area as a public park and cohousing site.

Members get priority for registration!

We plan to have three groups of maximum 20 people + 1 guide departing consecutively with half an hour between each group. The first group leaves at 9.30 am.
Start and finish: Gent Dampoort train station. The total route of the bicycle tour is ± 20 km and takes ± 7h00.

If there is great interest, we will consider organising the cycling tour a second time.